Apple MagSafe Battery review: It’s all about the convenience

Quick verdict: The Apple MagSafe battery makes it very easy to keep even the worst iPhones charged, especially if you own an iPhone 12 Mini or iPhone 13 Mini. 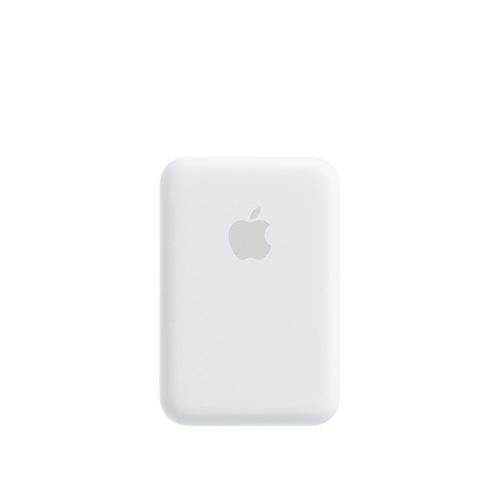 Apple's no stranger to the phone battery market. For some years now you've been able to buy an official Apple battery case for many iPhones, nearly always only sold in a plain white hue.

The Apple MagSafe battery is no different in colour terms, but its use of MagSafe connectivity and the underlying Qi standard gives it a lot more flexibility. It could arguably do with more actual battery capacity for its price, but there's no doubting its convenience.

Design: Here's what Apple did with all those dead iPods 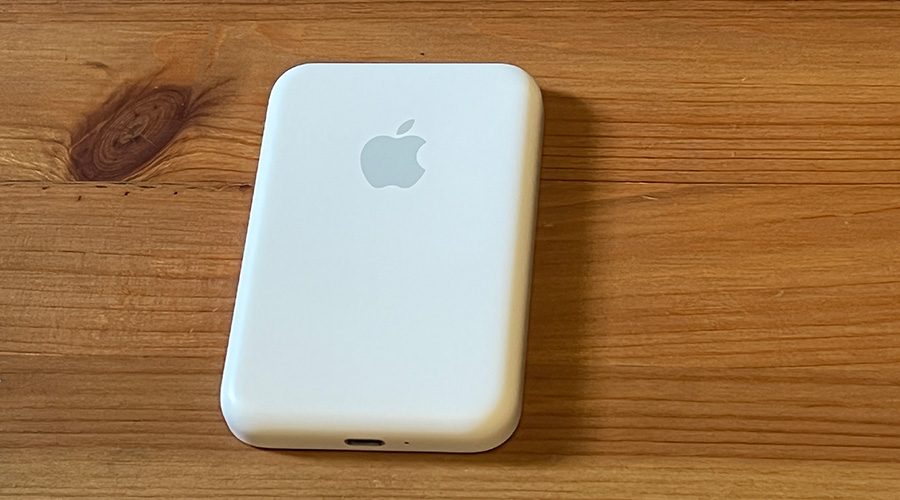 The Apple iPod is a true design classic, from the rotating scroll wheel to the compact size. There's a clear reason why it was the beloved music player of the early part of the century.

No, you haven't suddenly started reading the wrong review, and I haven't finally lost all my marbles.

It's just that the easiest way to describe the Apple MagSafe battery is to say that it looks almost exactly like a classic iPod, right down to a circular motif on the front. It's not a scroll wheel the way the classic iPod was, but instead the MagSafe connection area for compatible iPhone models. There's a lightning port at the base next to a single charging light, and an Apple logo at the back, and that's your lot. 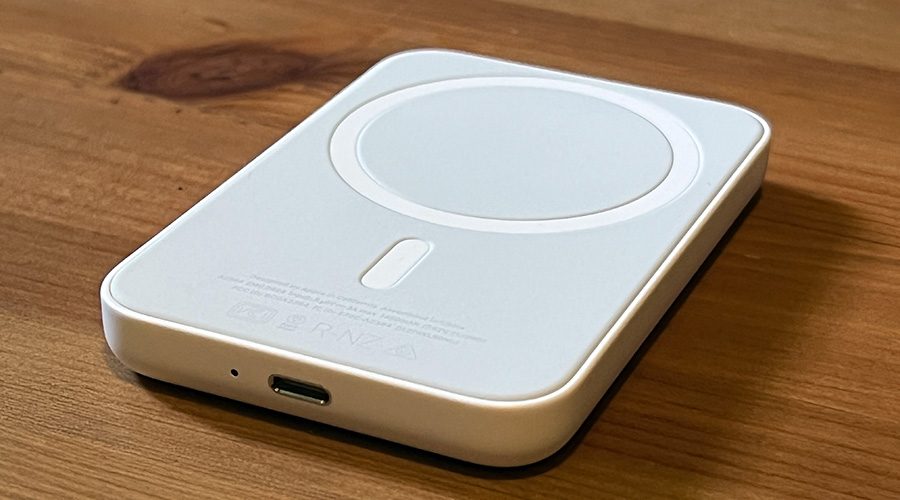 It's simple, it's lightweight, and it's very clearly been designed to fit neatly onto the back of the iPhone Mini family of devices. That does mean if you're using it on a larger iPhone with MagSafe connectivity it's going to stand out as its own "bump" quite a bit more.

One of the big advantages of MagSafe is that magnetic connection. If you're using an official MagSafe compliant case, the MagSafe battery still attaches on the rear without issue.

It's less satisfactory on unofficial cases, as you'd expect, but it's not impossible to get a basic connection up and running.

Performance: Easy to charge but tiny size means it's a small battery

MagSafe technology aside, the Apple MagSafe battery has quite a bit of very neat technology lurking within its iPod-like shape. At a technical level, it's a 5W-capable Qi charger in a standalone form, or up to 15W if it's plugged into a charger with at least 20W of its own capacity.

Sure, you could just plug that 20W charger and lightning cable into your iPhone directly, and that would be faster, but also less convenient on the go. Convenience is the name of the game here.

Qi charging does mean is that you can easily use the Apple MagSafe battery as its own Qi wireless charger for other devices. Orientation isn't quite as precise, but I did manage to get it to charge a Pixel 6 Pro without fuss.

It'll even manage reverse charging. If it's docked on your iPhone while that's got a charger attached, it'll charge up once your iPhone itself is suitably full.

It's also the only battery pack you can buy that includes its own iOS widget, because of course Apple can leverage the whole hardware and software side of matters that way. 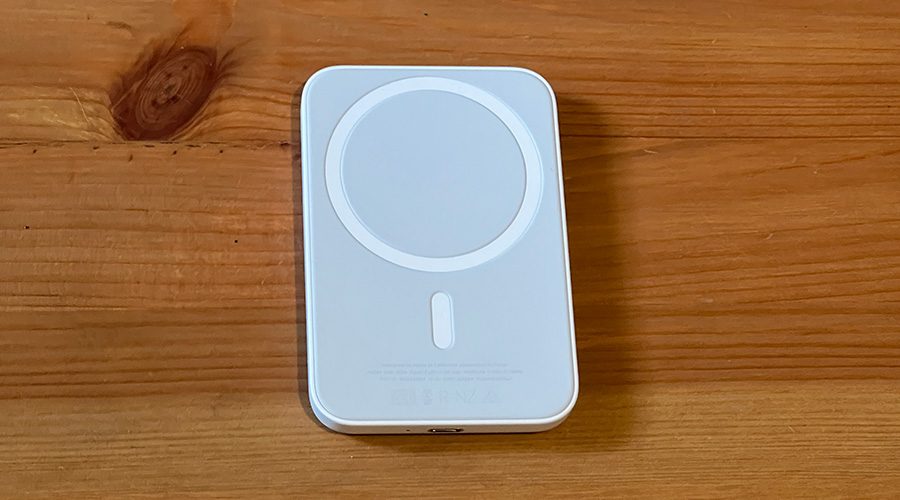 The battery widget gives you a nice visual view of the MagSafe battery's capacity, and it's needed, because there's no physical way to check its capacity before you slap it on the back of your iPhone.

Those figures are going to assume a completely charged Apple MagSafe Battery of course, but the practical upshot is that the internal capacity really isn't that huge.

It's basically a tool to ensure that you're able to get through a day's usage using heavier duty apps for the larger iPhones… or perhaps just at all for the iPhone Mini handsets.

The iPhone Mini is 100% the best use case for the MagSafe battery pack, because it's ideally sized and does deal well with those not-quite-full-day battery blues that many Mini owners experience.

Apple's figures are fairly accurate based on my own tests. The reality is that you're not always going to have a 100% charged battery pack, and you do need to be ready for a lossy charging experience, because Qi is like that.

In one instance with around 30% of its charge remaining, I was only able to add around 18% battery capacity to a nearly-depleted iPhone 13, for example.

I did hit one big caveat in my testing, and that's if you're faced with a totally depleted iPhone. In some cases when I tried using the MagSafe battery pack with a totally dead iPhone, it would never get to the stage of actually charging. It wasn't always the case – the iPhone 13 seemed more fussy than the iPhone 13 Mini, for example – but it was definitely a concern.

At a guess, iOS needs to start "talking" to the battery pack with a small degree of charge present, and may not do so for a 100% flat phone.

Should you buy the Apple MagSafe Battery?

The Apple MagSafe Battery pack isn't the largest capacity external battery you could buy for an iPhone by a very long shot indeed. At this price, it's really not that hard to pick up a simple battery pack with way more power. However, that's much less convenient that dropping a battery pack on the back of your phone and letting it automatically charge up. And this is why it won the best 'convenient iPhone wireless charger' spot in our best wireless chargers guide.

There are magnetically attached packs out there, like the Mophie Snap+ Juice Pack Mini, and that's a more flexible option with a higher capacity, but it's not as neatly integrated within iOS – and it also doesn't automatically start charging your iPhone as soon as it's clipped in place.

That's the story of the Apple MagSafe Battery, because it's all about that convenience. If you're after the easiest way to keep your iPhone going all day long, especially if you're an iPhone Mini owner, this is it.

I tested the Apple MagSafe Battery across an iPhone 13 Mini, iPhone 13 and iPhone 13 Pro Max, noting size compatibility and testing battery charge from nearly flat iPhones in all cases. I also checked it for Qi charging compatibility with other wireless charging handsets including a Google Pixel 6 Pro and the Samsung Galaxy Z Fold 3.

I have more than 23 years experience writing technology reviews for numerous publications. Apple supplied me with a MagSafe Battery for review.