Quick verdict: The Mac Studio is way too much computer for everyday users, but if you constantly shuffle around large data sets, work with high resolution video or have hundreds of RAW images to sort, select and tweak, its power and flexibility make it a compelling computer. Apple's Mac Studio takes the core concepts behind the Mac Mini and supercharges them with an eye towards creative professionals who need a great deal more processing power.

The end result isn't an inexpensive computer, especially for the M1 Ultra variant, but it's one that fuses together good silicon design with good practical design. It's not a computer for everyone, but it does point to some features that hopefully will trickle down to the Mac Mini the next time there's a refresh of that line.

If you do work creatively and want a powerful desktop system with oodles of flexibility thanks to its wide array of ports – and if you can meet the asking price, especially for those M1 Ultra models – then it's an easy recommendation.

Apple Mac Studio review: Apple finally made a useable computer, not just a pretty one 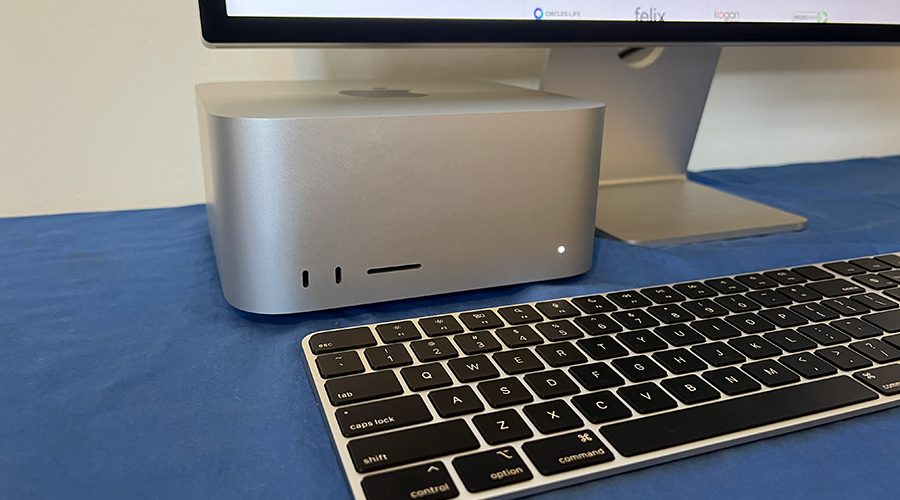 I'm going to cut to the chase here. The most exciting thing about the Mac Studio is that somebody, somewhere at Apple must have read the many thousands of words I've written over the years bemoaning the fact that iMacs, Mac Minis and Mac Pros all lacked easily accessible ports.

Yes, it's very pretty to have a clean silver aluminium line around your computer, but it's also a right royal pain in the backside when you need to plug in a peripheral and you have to either navigate where it is by feel or lean over the computer to try to work out where it is.

At a stroke, the Mac Studio does away with this problem with dual USB-C ports and an SDXC card reader directly accessible from the front.

MORE OF THIS KIND OF THING, APPLE. 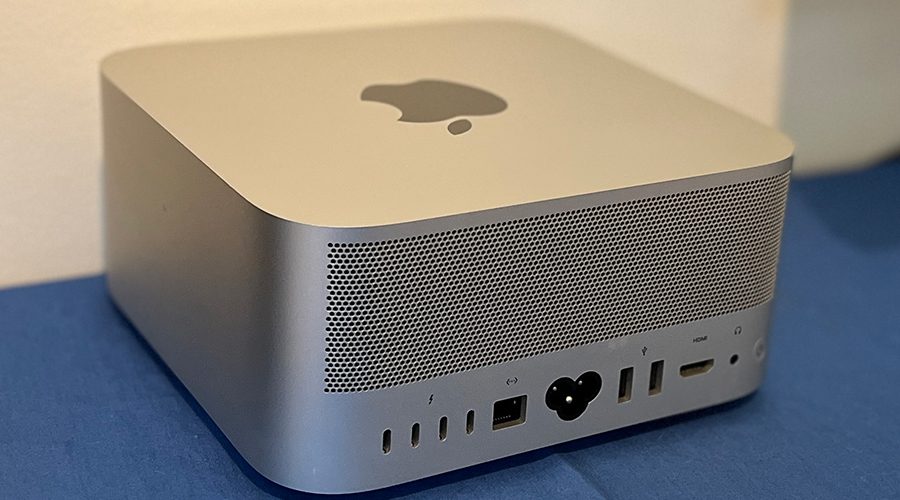 Outside my excitement at a trio of ports (yes, I'm a very sad and lonely man, before you ask), the other surprising factor with the Mac Studio's design is that it's a chunky little beast. The design debt to the Mac mini is obvious, but the Mac Studio is taller and heavier, mostly to accommodate some serious fans for heat dissipation.

That's especially true for the M1 Ultra variant of the Mac Studio, which is a full 900 grams heavier than the M1 Max model I've been testing out. Weight doesn't matter quite as much for a desktop unit, of course, but still, that's a full iPad and then some heavier just to keep the Mac Studio cool!

Spin the Mac Studio around – and to be fair to my earlier comment this isn't that hard to do at least on this model – and you'll be greeted with a power button, headphone jack, HDMI, dual USB-A, power, gigabit ethernet and 4 Thunderbolt ports. If you opt for the fancier M1 Ultra model you even get Thunderbolt at the front too. 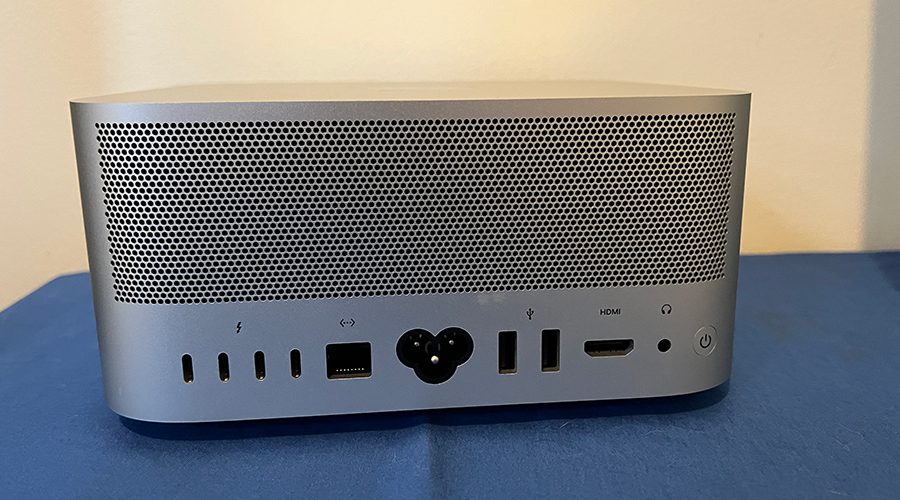 All of this adds up to a small form factor PC that can connect to just about anything you'd care to name, including multiple displays, storage media and other peripherals.

It's an odd move given Apple's simultaneous launch and insistence that they're products that work well together. They'll certainly connect, but you'll have to pick placing the Mac Studio to either the left or right of the Studio Display Stand rather than centrally. I expect the Mac third-party peripheral makers are probably sketching up expanded Studio Display feet as I type this.

Apple Mac Studio review: The performance of the M1 Max is fast, so the M1 Ultra should be off the charts 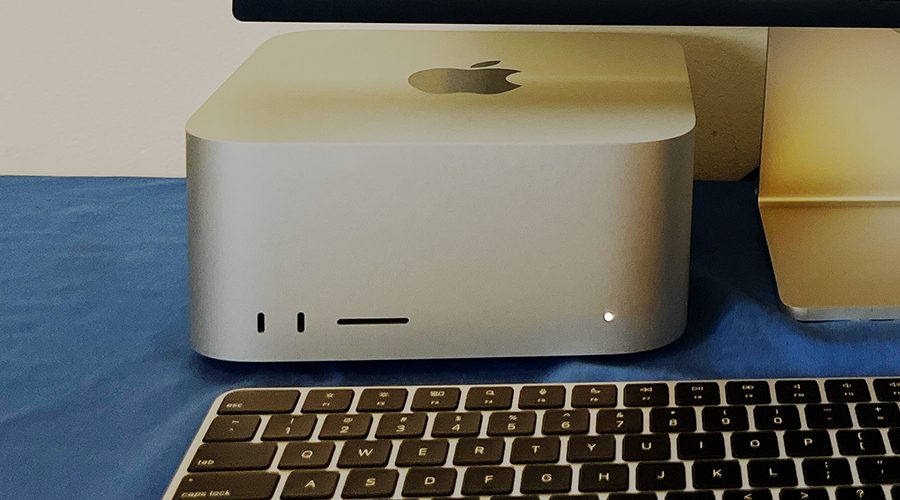 At the outset it's important to note that, unlike the currently available M1 MacBook Air or smaller MacBook Pro, there's a lot of variance in what might be under the aluminium frame of the Mac Studio. 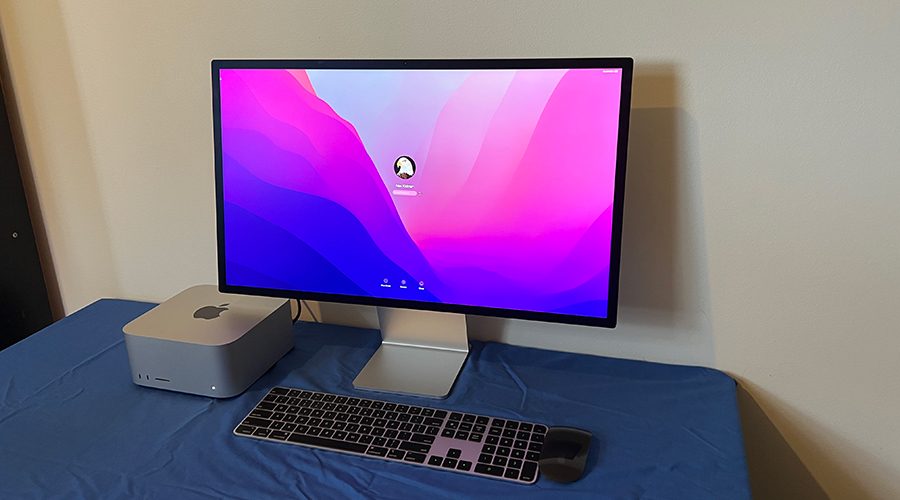 As you might expect, that does mean that there should be a variable range of performance.

I mean, I'm writing this review up on the Mac Studio, and of course it works and flies through barely noticing that I'm there, but that's not what it's for. If you want an everyday computing Mac in a headless fashion, save yourself considerable cash and opt for one of the M1-based Mac Mini models instead.

For my testing purposes, I first put the Mac Studio through its paces with a few commercial synthetic benchmarks, just to see how it stacked up against other Apple silicon-based devices.

Not surprisingly, the Mac Studio, even in its non-Ultra form, is quite a hefty performer:

Those tables don't tell the whole story, although they do create an interesting balance proposition against the similarly equipped M1 Max version of the MacBook Pro 16-inch. You'd need to weigh up your needs for portability carefully against your needs for the Mac Studio's additional ports and then the pricing for extras such as RAM and storage for each configuration. 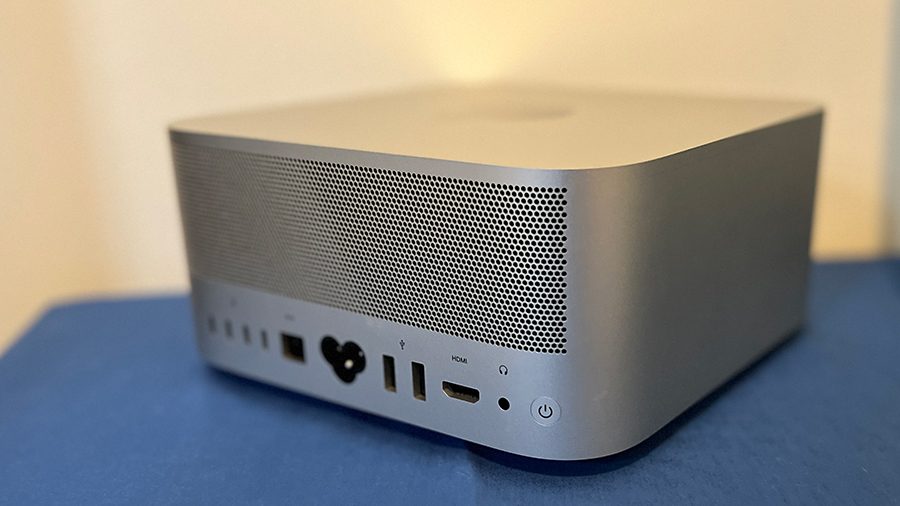 The simple reality here is that you need high-end apps and need to really explore what those possibilities might be.

My day-to-day Mac use covers text, photography, audio and video, but even leaving multiple apps including Adobe Photoshop, Audition, Final Cut Pro X and then a whole host of potentially memory-hogging Google Chrome tabs open, I've barely been able to make the Mac Studio sweat. Given its effectively-2-M1-Max-processors-nailed-together status, the M1 Ultra should (at least on paper) be an even more capable machine.

Then again, for that price, it absolutely should be.

The Mac Studio is a serious piece of kit with a price point to match and that does mean that it's not a computer for everyone. I'd love it if somebody wanted to buy me one, but for my everyday work it would be total overkill, even in its baseline M1 Max configuration.

So it's not for me, but that's totally fine, because it's not hard at all to see who it would suit. The biggest caveat beyond price is that Apple wasn't subtle at all about the fact that it has a revision upcoming for the Mac Pro line, which is where it would otherwise pitch to its professional-grade customers.

It's pretty safe to assume that the M1 Ultra might be the bottom floor of the next-gen Mac Pro's capabilities and it's expected this year. If you can hold your ground for now, it's likely to be Apple's true supercomputer, with an equally super price.

The Apple Mac Studio retails in Australia with prices starting at $3,099. The model provided for review retails at $4,899. 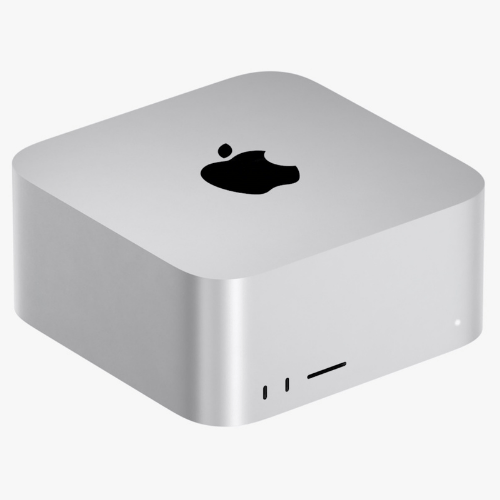 Apple loaned me a Mac Studio and Studio Display for a fortnight to test out its capabilities. It was tested with a range of benchmarks, as well as use for more intensive tasks such as photo manipulation, video editing and rendering as well as everyday computer usage over that timeframe, connected to an Apple Studio Display and an LG widescreen monitor to test out its visual capabilities.