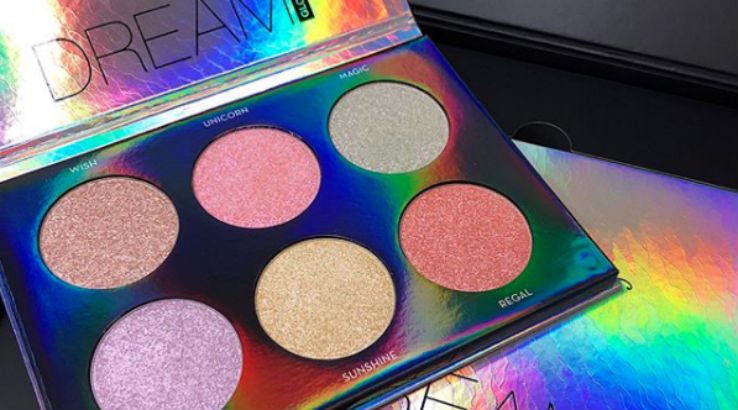 Get ready to shine bright like a unicorn with this new glow kit, and we promise you, it's a dream.

UPDATE: Festival season is fast approaching and Anastasia Beverly Hills has got you covered. The brand has been giving us sneak peaks of this upcoming highlighter palette for what seems like forever, but now we've gotten the full reveal!

It consists of six glorious shimmering shades that will have you glowing to the gods. It's called the Unicorn Dream palette, and it's precisely what you will look like – a unicorn dream.

The shades are called Wish, Unicorn, Magic, Ethereal, Sunshine and Regal, and we're seriously getting some majestic vibes. Judging from the swatches, these highlighters are heavily pigmented, but we wouldn't expect anything else from Anastasia Beverly Hills.

So when and where can you get your hands on it?

The highlighting palette has already dropped to the official ABH website, but there are stockists that are easier to purchase from in Australia. If you're willing to wait just a little longer, we definitely expect this to come to Sephora as well as UK-retailer Cult Beauty.

It's safe to say Anastasia Beverly Hills is the queen of highlighters. After the most recent release of the Amrezy highlighter collab and its success, we didn't think we'd see another highlighter for a while. We thought wrong.

The best part is that this highlighter isn't just one. It's an entire palette of six majestic shades to set your inner unicorn alight. The new glow palette is called Unicorn Dream and we couldn't think of a more fitting name. As mentioned, it consists of six shades that we got to view in a very sneaky sneak peek via Snapchat.

We haven't been able to see a proper picture of the palette just yet, so shade names are currently unknown, but we can tell you what the actual shades will look like. It consists of an orange, pink, blue, coral, gold and what looks to be purple. These shades give the prettiest iridescent hue that is just perfect for the upcoming festival season.

We assume they're going to have the same formula as other glow palettes, and that's a tick in our books! On the skin in the video posted, the highlighter does look to be fairly glittery and holographic.

So when and where can you buy the Unicorn Dream palette?

The palette does not have a designated release date as of yet, but we do know when you can generally expect it! It's said to drop summer 2018 in the US, so for us here in Australia, that's some time this winter!

You can purchase the brand Anastasia Beverly Hills from a number of official stockists or the actual ABH site. If you're wanting to swatch and play around with products then Sephora is your best bet as it stocks the brand in store and online. However, if you're looking for a slightly cheaper alternative, then Cult Beauty also stocks ABH and tends to get products in sooner, but you will have to wait for shipping.