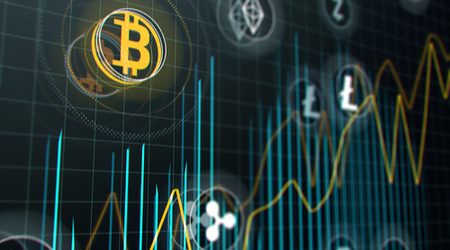 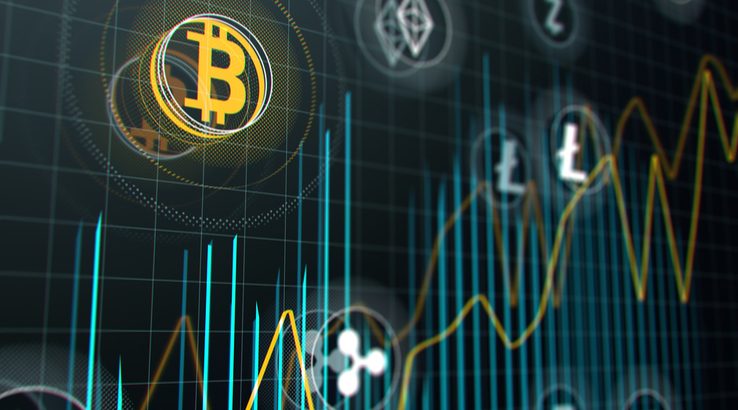 Thanks to the blockchain, you can analyze much more than the price and volume.

In bitcoin, a lot of attention is given to traditional technical indicators like price and trade volume, but the nature of the bitcoin blockchain, specifically its perfectly traceable unbroken transaction record going right back to the first genesis block, means it's possible to find other insights that go unrecorded on other asset types.

One of them, picked up by Dhruv Bansal, co-founder of Unchained Capital, is coin age.

Coin age refers to the time since a coin was last transacted. If a coin was last transferred a week ago, then it is a week old. If it has been sitting untouched in a wallet for two years, then its age is two years. This can be used in different ways. Reddcoin, for example, alters staking rewards based on the age of coins being staked, to discourage hoarding and encourage a more lively economy.

Bitcoin doesn't do anything with coin age, but it's still a measurable factor that reveals interesting user habits, and by looking at the coin age of every single bitcoin in existence, and colour coding it, you end up with this kind of pattern, and a number of characteristic "HODL waves," as Bansal calls them.

These are essentially a lot of coin and price movement, followed by a lot of hodling. By tracing coin age over time you can see people acquiring bitcoin and then just hanging onto it over time. 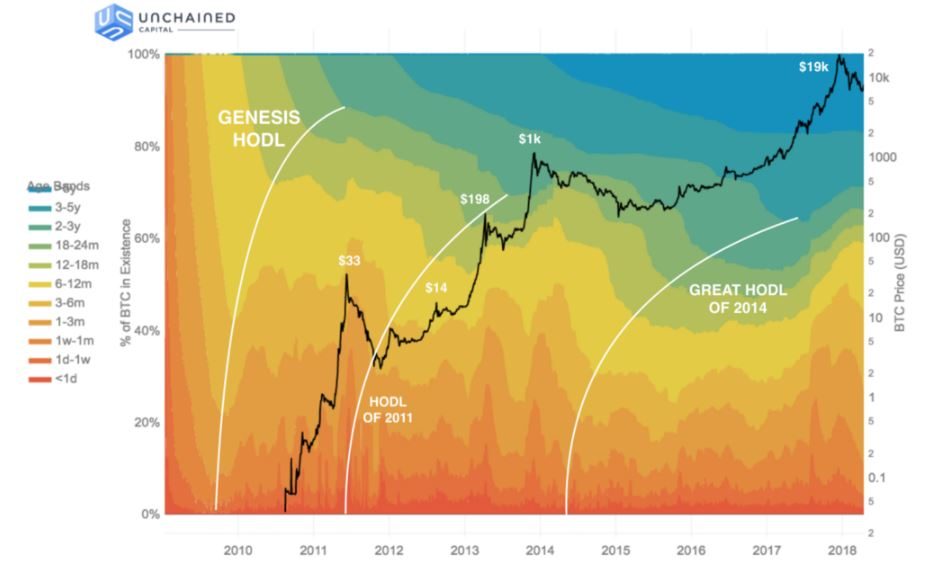 Right at the start, all coins in existence were less than a week old. If you look closely, this takes the form of a solid dark orange line on the left-hand side. Each new colour kicks in right when bitcoin as a whole reached that age. The yellow line (6 months old), for example, emerges exactly when bitcoin turned 6 months of age.

This shows that some of the coins created right at the beginning have never been touched. These are probably those lost to dead hard drives, (and dead hard drive owners), forgotten passwords and other misadventure over the years, which are now permanently out of circulation.

Bansal identified three large waves in bitcoin's history, along with plenty of smaller ones.

As you can see, each colour band stays very fat and clear. This shows most people just holding onto the vast majority of coins they mine, without selling or transferring them. This is because there weren't any bitcoin exchanges, and there wasn't much you could do with bitcoin at first. This changes quickly though.

Three things happen all at one in the Genesis HODL.

The interesting part is tracing that dark orange line upwards. You can see how that spike gets passed on into the lighter colour bands over time.

What does this mean? It means that as soon as it was possible to buy bitcoin, a lot of people did, and they started "HODLing" right from the beginning. But as you can see, that particular spike only really trickles up to around the $33 price peak of 2011.

This shows that most of that first wave of buyers sold off around that first peak, or when prices dropped shortly afterwards.

The other waves can be read in a similar way, as history repeated itself in different ways.

"During the rally up to $33 in June 2011, all the holders who sold were early miners by definition. No one else could really have acquired BTC to sell," Bansal says. "But the rally up to $198 was different. The age bands which shrunk the most leading up to the rally were between 12 months to 24 months. These were likely the first wave of investors — not miners — selling to realize gains. These investors would have acquired their BTC leading into the prior $33 price rally and afterwards."

"Right after the rally to $1k, more than 60% of BTC had been spent within the last 12 months. This was the most “recent” moment for BTC’s money supply in history — the moment at which the average last time of use of a Bitcoin was lowest. Who sold? Once more, it was the investors who purchased in the prior 2–3 years, through the $33 peak and the $198 peak."

The "long winter of bitcoin" as Bansal calls it saw people hunker down and hang onto their stash for years, as shown in the increasingly fat blue lines at the top. It ended when bitcoin and cryptocurrency saw its extraordinary 2017 run.

This can be seen in that sharp upwards-running-looking ripple effect in mid 2017. This band is composed a few events, all of which saw many old-time HODLers unlock their dusty bitcoin for the first time in years.

One of the clearest, occurring at almost the exact time that spike started, was the bitcoin cash fork on 1 August 2017. A lot of people needed to move their bitcoin into compatible wallets, off exchanges and similar to make sure they would be appropriately credited with their bitcoin cash airdrops. Elsewhere, people were buying into ICOs, cashing out while they could and generally throwing around a lot of bitcoin for various reasons.

"As the data shows us, there is already the development of another generation of holders settling in for the long haul," Bansal says. "Beginning in January 2018, the category of bitcoin that are 6–12 months old rebounded from a low of 7.76% to 14.63%, a doubling of its population."

It's not possible to say with any certainty what this actually means for bitcoin prices, and Bansal didn't hazard a prediction, but one of the key takeaways might be that bull runs and bitcoin prices are quite fragile. Only a tiny fraction of the bitcoin in existence is being actively traded at any time, and the vast, vast majority of it is being locked up for weeks, months and years on end. However, things get very busy very quickly whenever prices heat up, and there's no shortage of people willing to cash out when they think prices are at, or near, the peak.

Based purely on these patterns, and without considering bitcoin's inherent demand (or lack thereof), a reasonable expectation might be that bitcoin will move sideways for a while until things coalesce into another bull run, possibly years later. When this happens it turns into a game of chicken, with HODLers riding prices as high as possible, but jumping off before the rollercoaster crashes again.

But you can't really consider anything in that kind of vacuum. The only consistently reasonable prediction for bitcoin at any given time is that prices will keep going up and down.