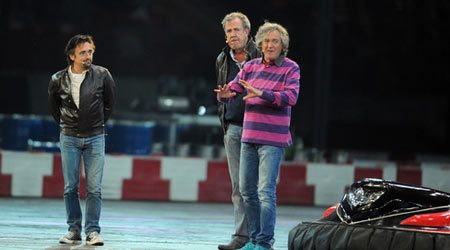 Amazon's streaming-video-on-demand (SVOD) service might finally see an official launch in Australia off the back of the forthcoming Amazon exclusive show featuring former Top Gear stars Jeremy Clarkson, Richard Hammond and James May.

Industry analysts believe that the planned motoring show, which is expected to appear on Amazon Video before the middle of the year, would be the ideal platform for Amazon to make its own assault on the Australian market, according to a report in the AFR.

Clarkson, Hammond and May were signed by Amazon after Clarkson was dismissed from the long-running BBC motoring show after attacking a producer.

Amazon's original productions, including award-winning series such as Transparent and Mozart In The Jungle, have made it a strong competitor to Netflix around the world. However, it is yet to reveal official launch plans in Australia.

One big stumbling block for Amazon is that Amazon Prime membership, which costs $US99 a year, isn't solely about watching streaming video. It also includes free two-day delivery on all products ordered through Amazon. That would be expensive and tricky to execute in Australia, where delivery options are less diverse and Australia Post has cut back on the frequency of regular services. However, charging a similar sum in Australia -- likely, since most rival services cost around $10 a month -- might lead to a backlash since it would include "less" than the US equivalent.

Amazon's Australian site only sells its Kindle ebook reader and ebooks that can be read on that device. Its Amazon Web Services (AWS) cloud platform also has a data centre in Sydney.

With no "official" local outlet, Amazon has licensed several of its "original" productions to Stan, which might mean they wouldn't actually appear immediately on Amazon's own service at launch. It has been widely speculated that the Clarkson/Hammond/May show might appear on Stan, given that it is half-owned by Channel Nine, which has been the main free-to-air broadcaster for Top Gear in recent years. (That said, the last series of Top Gear received its official Australian debut on Foxtel's BBC First channel, rather than Nine.)

Outside of originals, Amazon would also have to try and license rights to existing shows and movies, something that might prove difficult. Between Netflix, Stan and Presto, most productions are already tied to an existing service in Australia.

While Australians can potentially use a VPN to access Amazon Video, that's a little trickier than with rival services. Because Prime delivery is a key part of the package, you need to specify a US address, and online reports suggest than non-US credit cards aren't allowed to sign up for the service.