Quick Verdict: The Amazon Fire TV Stick 4K is Amazon’s best streaming device to date, and an easy way to add a lot of streaming content to your TV with minimal fuss. 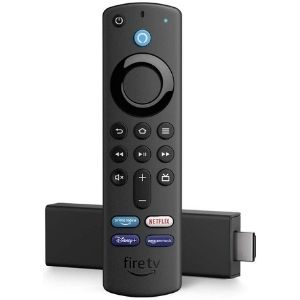 Up until now, if you wanted one of Amazon's Fire TV devices in Australia, you had a solitary and rather uninspiring choice. The Amazon Fire TV Stick Lite and Fire TV Stick Basic really did live up to their names, with a light feature set and a price point that made Google's Chromecast a much better choice for Australians. It was particularly galling as Amazon made much better Fire TV devices available for its US home audience, but not here in Australia. 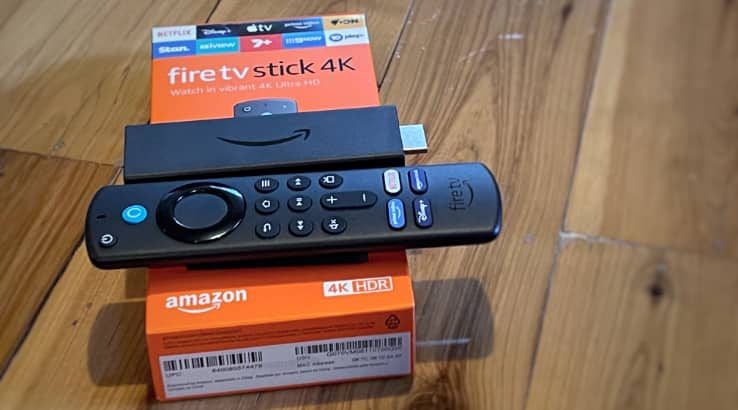 Like its Amazon Basics line, there's nothing fancy at all about the Amazon Fire TV Stick 4K.

It couldn't be more aptly named, because it's a stick that you might otherwise mistake as a USB flash storage drive, were it not for the HDMI plug at one end.

The Amazon Fire TV Stick 4K is comparatively a little longer than the Amazon Fire TV Stick 2021, but it's otherwise the same design, with a black matte plastic finish, Amazon smile logo down one side and a microUSB port on the side to deliver power. If your TV has USB A type sockets on it, you may be able to run it entirely from the TV side, but if not, a wall charger and cable is supplied in the box.

The one caveat with that longer size is that for some TV set-ups it may not fit nicely into your décor or available space, depending on where your TV's HDMI sockets sit. Amazon does provide a small HDMI extender to make it easier to plug the Amazon Fire TV Stick 4K into your TV.

The Amazon Fire TV Stick 4K uses the same new remote as found in the box for the Amazon Fire TV Stick 2021, which means that it comes with included controls not only for the Fire TV interface, but also to control compatible TVs for power and volume. Your TV's remote will naturally have more controls and fine tuning that it can bring to bear, but it's very handy to have a single remote to control the basics of most streaming functions. 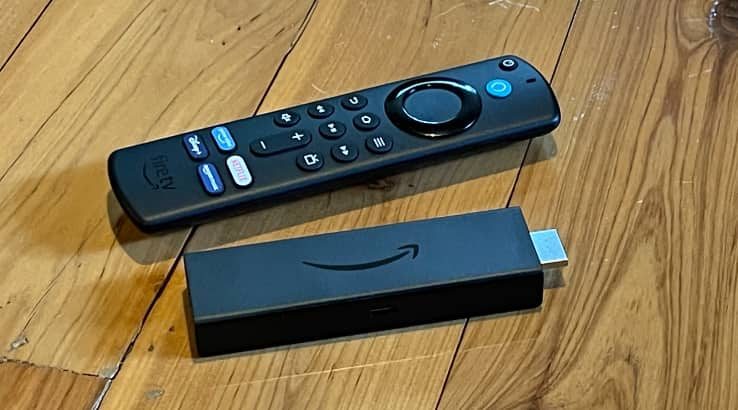 Setting up the Amazon Fire TV Stick 4K is a simple process that involves connecting to your TV, pairing the remote and signing into your Amazon account. One neat trick here that I didn't anticipate is that if you've already set up a compatible Fire TV stick on the same account, it'll remember your apps and offer to restore them. The Fire TV Stick Lite didn't seem to register, but the Amazon Fire TV Stick 2021 that I was reviewing concurrently did, so I was able to skip a few app installs along the way.

It's become very common for most streaming apps to offer a web-based authentication system via a code, and most of the apps on the Amazon Fire TV Stick 4K work precisely this way. In terms of specifically Australian apps, you get access to ABC iView, SBS On Demand, 9Now, 7+ and 10Play, but critically not Foxtel Now, Binge or Kayo.

While some online reports suggest that it may be feasible to sideload those apps via their Android APKs, I wasn't able to get that working during my review period. In any case, Foxtel could block that kind of functionality. If Foxtel/Binge/Kayo access is important to you, you'll need to spend a little more on a Foxtel-compatible set top box, sadly.

Foxtel is notable because otherwise the Amazon Fire TV Stick 4K does a good job of covering the big players in the streaming space, with dedicated buttons on the remote for Netflix and Disney+, support for Stan, UFC, Twitch, WWE Network, Hayu, NJPW World, MLB, NBA, NFL Gamepass, Funimation, Crunchyroll and quite a few more. Google Play Movies is absent, but that's to be expected given that the Amazon Fire TV Stick 4K runs pretty much head to head with Google's Chromecast with Google TV.

That's especially true in terms of output quality, with the Amazon Fire TV Stick 4K supporting video at up to 4K – depending on your provider and plan, naturally – plus HDR10 or Dolby Vision, again depending on support.

Most streaming services work on a dynamic basis depending on the quality of your NBN connection, so your quality results may vary, but I had no complaints with the visual or audio quality coming out of the Amazon Fire TV Stick 4K.

Response within the UI was snappy, and the inclusion of Alexa means that you can use your TV like it was a big Echo speaker, controlling smart home appliances at will if you've already set them up through the Alexa app on your smartphone.

If I want to be particularly critical, the Fire TV UI does tend to surface Amazon Prime Video content above all else, but that's really only a small complaint.

However, there's something of an elephant in the room, and it's wearing a jumper with a brightly coloured "G" on it.

The Amazon Fire TV Stick 4K is priced identically to the Google Chromecast with Google TV, another smart stick – well, okay, ovoid, but once it's behind your TV you'll never notice it anyway – with remote control, 4K compatibility and a wide range of apps, excluding Foxtel.

While at one level it might come down to personal preference, basically around which global mega-corporation you want tracking your viewing habits, the one trick that Google can pull out of its hat is Chromecasting ability, allowing you to send all sorts of content from phones, tablets and computers directly to your TV screen.

Amazon doesn't have that level of functionality, and I did miss it during my review period. Conversely, Amazon's Fire TV Stick 4K (and the cheaper variants) do offer access to Apple TV+, which is yet to appear on the Google Chromecast with Google TV.

Should you buy the Amazon Fire TV Stick 4K?

How we score our reviews
Within the Fire TV stick family available in Australia, the Amazon Fire TV Stick 4K is easily the best and clearly the one to be recommended if you're already an Amazon shopper with a Prime account and a need for enhanced Smart TV functionality. It's only a smidge more expensive than the very similar all-new Amazon Fire TV Stick 2021 with better output quality that can provide for 4K content now, or as a future-proofing method when you next upgrade your TV.

However, it's well worth considering your needs against the Google Chromecast with Google TV, which sells at the same price and includes casting capabilities that Amazon is not yet on board with. Likewise, if a lot of your TV watching revolves around Foxtel, this isn't the smart TV device for you.

The Amazon Fire TV Stick 4K retails in Australia for $99.