2021 AFL season: Who will make the finals series? 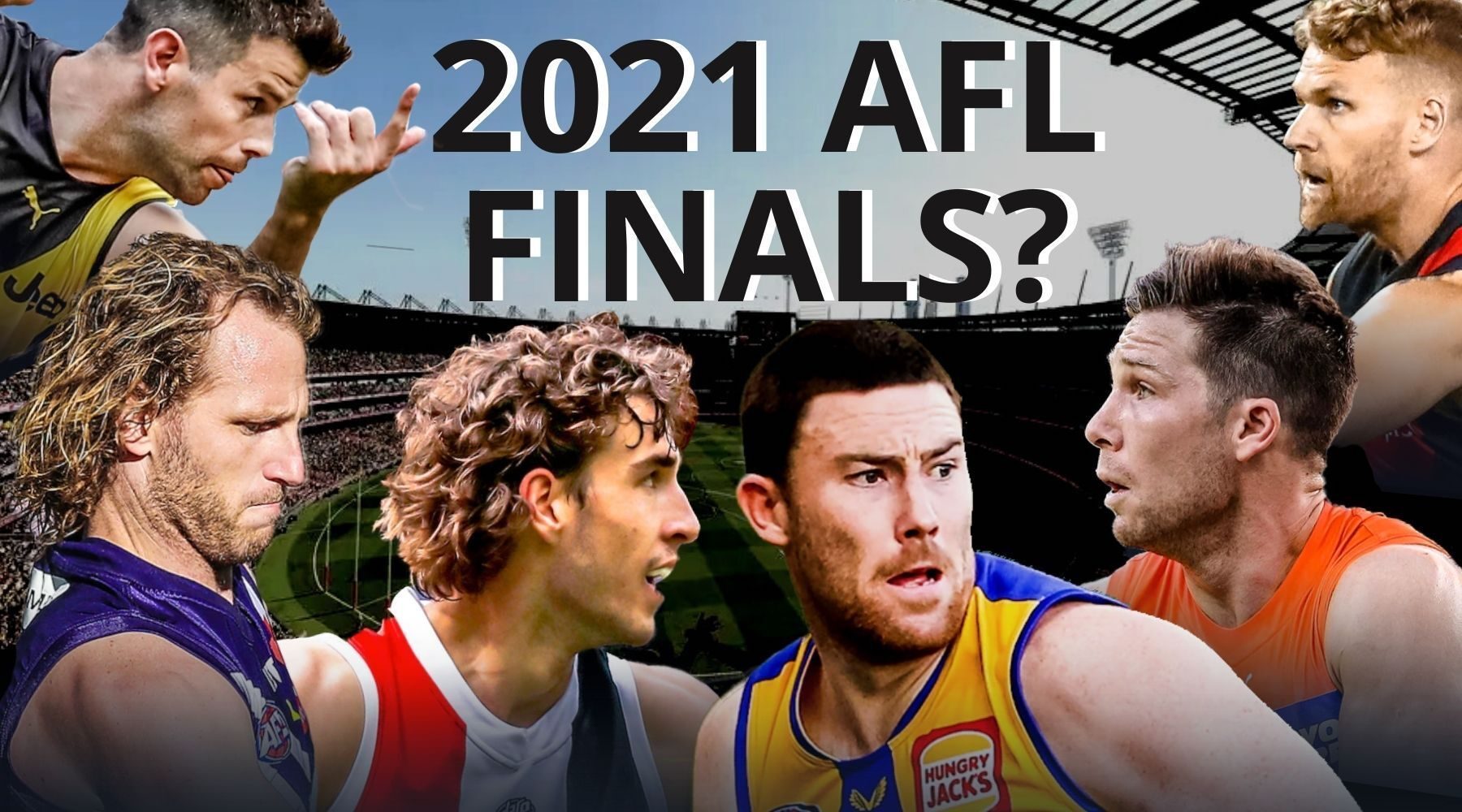 With a single round remaining, 12 teams are vying for a place in the AFL's top 8 and to stay alive in the premiership race.

Reigning AFL premiers Richmond need a series of minor miracles to fall their way if they are to contest the 2021 AFL finals series. The Tigers are among 12 teams remaining in the hunt for the finals. They are also 1 of 6 sides with a mathematical chance of claiming eighth spot on the ladder.

There's also still plenty to play for at the top of the ladder with 6 teams vying for a top-4 place to guarantee a double chance come finals. Of those, 4 teams are fighting for a top-2 place, which means a home final. Well, it could mean a home final depending on the pandemic.

The 2021 final round is shaping as the best finale to an AFL season since 1987. Here's how it breaks down.

When do the AFL finals start?

The AFL has scrapped the pre-finals bye this year, meaning the finals series is set to get underway on Friday 27 August. Considering the troubles the league had finalising the weekly fixtures all season long, it may be some time yet before we know the times and, more importantly, locations of the finals.

How to watch the AFL finals

AFL matches are broadcast between Channel 7 and Fox Footy. The postseason will be available on both platforms. If you are looking for a range of special features to add to your viewing experience and access to more than 50 sports, you should check out Kayo Sports. We also have a full viewing guide to the AFL season.

How do the AFL finals work?

The current system, adopted in 2000 by the AFL and later inherited by the NRL, rewards teams for finishing as high as possible on the ladder. In the top-8 system, first plays fourth and second plays third, hosted by the higher-ranked team. The winners of these games get a week off and progress straight to a home preliminary final.

Meanwhile, fifth plays eighth and sixth plays seventh. The losers of these games are eliminated and the winners progress to face the losers of the top-4 clashes.

For some, it’s the last chance to make an impression before finals 👀

All the predicted ins and outs for round 23 from our team at @AFLcomau 👇https://t.co/qRebCvz29q

Which teams have already made the AFL finals?

The top-6 teams are all guaranteed to play in the postseason. That's Melbourne (1st before round 23), Geelong (2nd), Port Adelaide (3rd), Western Bulldogs (4th), Brisbane Lions (5th) and Sydney Swans (6th) will all be part of the finals action.

As if it had been planned all along, the top-4 teams play each other this weekend. The Western Bulldogs host Port Adelaide at Marvel Stadium in Melbourne on Friday 20 August. Then Melbourne travel to Geelong to face the Cats at Geelong's GMHBA Stadium on Saturday night. Melbourne will finish first if they win.

From here, it gets a little complicated.

If Melbourne and the Bulldogs win, they'll finish 1 and 2. If Geelong and Port win, it'll be Geelong in first, Port in second, Melbourne third and either the Bulldogs or Brisbane fourth. Or, if Port were to smash the Dogs, Port might finish top, even if Geelong defeat Melbourne.

If Geelong and the Bulldogs win, Geelong will finish first and Melbourne second.

Meanwhile, both Brisbane and Sydney can sneak into the top 4 if things fall the right way for either. The Lions, as shown above, have the better chance. The Swans would need a massive win over the Gold Coast Suns and a Bulldogs loss to make up the 19.4 percentage gap they concede going into the round.

Final round of the 2021 AFL season (all times AEST)

Which teams are fighting for a chance to play AFL finals?

As mentioned, the Tigers need a series of miracles to feature in the finals. They need West Coast, Essendon and Fremantle to lose and make up a percentage difference of about 24 goals over the Bombers.

St Kilda's challenge is even greater. The Saints need a major miracle that simply won't happen.

Of those 6 teams, GWS, Essendon, West Coast and Fremantle have the best chances. GWS can afford to lose and still make it, provided both Essendon and West Coast don't win.

Get deal
Essendon will make it should they beat Collingwood. West Coast need to beat Brisbane in Brisbane – a tough ask given the Eagles' flaky form – and for either GWS or Essendon to lose, plus St Kilda beating Fremantle or the Dockers not winning by too much. The Dockers, meanwhile, need to beat St Kilda and 2 of GWS, Essendon and West Coast to lose.

What happens in case of draws? Oh my. The AFL website has a fun ladder predictor where you can play out the machinations at your leisure. It's sure to fill up lockdown hours for those of you trapped indoors.

All but 1 round 23 game will have a say on the composition of the finals. That game is Adelaide vs North Melbourne (17th vs 18th). North are guaranteed to "win" the wooden spoon, the so-called prize for finishing last on the ladder at the end of the home and away season.

EXCLUSIVE: Authorities drawing up WA’s proposal for an AFL finals hub are looking into how all eight clubs competing for the premiership flag can be hosted in Perth, Fremantle, Mandurah and Bunbury. 🔒 https://t.co/Z4ZWvTiLyK

Who we think will make the AFL finals

We think round 23 winners will be, in order of matches, the Western Bulldogs, Richmond, Sydney, Brisbane, Geelong, GWS, Fremantle, Essendon and, for measure, Adelaide. That will leave the first week of the finals looking like this:

Who will host the AFL grand final?

It's looking more and more likely that the MCG will be a ghost town come grand final day for a second straight year, given Victoria's current coronavirus situation. That leaves Adelaide, Brisbane, Perth and Tasmania as possible options, although Tassie would be a last, last, last option.

Adelaide and Perth appear the most likely venues. Perth's Optus Stadium came alive during last week's action-packed derby between Fremantle and West Coast and, provided the West Australian government allows fans, the venue looks a good chance for the big one.

Adelaide and the South Australian government will do all they can to snatch the game though.

Brisbane hosted last year's grand final and proved it could put on a show and the Gabba remains an option, especially with Queensland's low case numbers and the government's proven ability to work with the AFL.

There's 1 option that could see the game held in Melbourne and that is crowds being allowed at the MCG. For that to happen, Victoria needs time – potentially more time than the AFL can allow.

Who has won the most AFL grand finals?

Essendon and Carlton share this honour with 16 apiece. But they have been stuck on that number for some time now. The Blues got there way back in 1995, while the Bombers last lifted the premiership cup in 2000.

Collingwood are a sole triumph behind that duo on 15. Richmond's recent glut of flags has closed the gap, moving to 13 overall by winning 3 of the past 4 deciders.