Quick verdict: The Acer Swift 3X doesn't look much different to most other ultrabooks, but it impresses with exceptional battery life.

Calling any laptop "Swift" is, on the surface, just asking for a little mockery. The very first time it struggles with a task, you're going to be tempted at the very least.

The reality with the Acer Swift 3X is that while the naming is a little silly – and could be a tad confusing because Acer has a lot of laptops called Swift – there's actually a lot to like about this particular ultrabook, most notably its solid battery life for an ultraportable system.

If you consistently need to work or study away from a power point, that might be enough to sell you on its merits right there. 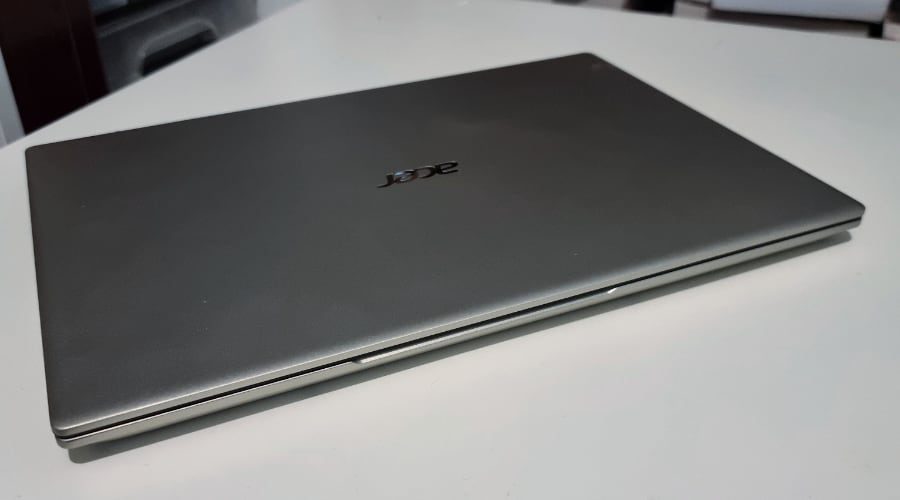 Is "ultrabooky" a word? Probably not, but if anyone wants to come up with a proper dictionary definition of it, they could do worse than examine the Acer Swift 3X.

While in pictures it appears to have a silvery/gold type finish, it's actually a plastic body laptop, and that's somewhat disappointing. It can't help but feel a little bit cheap, even though this isn't a low-cost model.

The 14-inch 1920x1080 IPS display has some notable flex that worries me in terms of long-term durability. The one oddity in its design is that the hinge of the Acer Swift 3X is bright blue. You will 100% never notice this when you're using the Acer Swift 3X, but people sitting opposite you will. It stands out a lot, but I don't get why Acer particularly bothered. 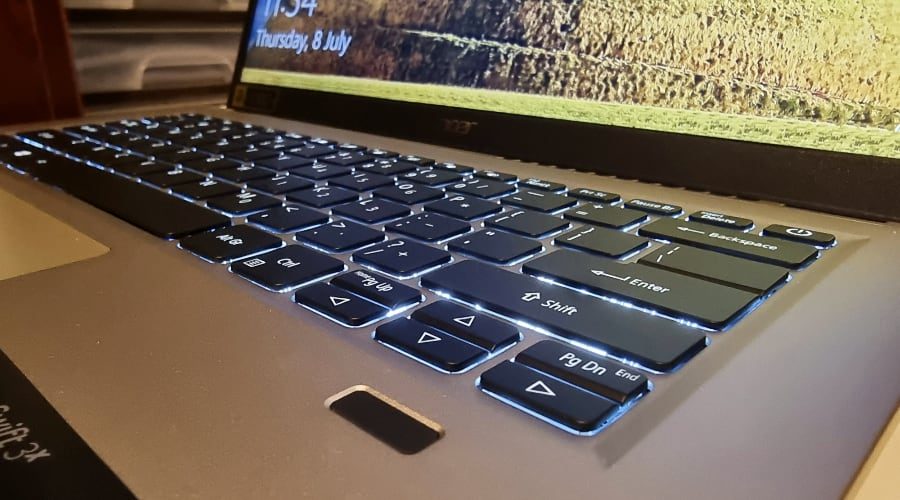 That plastic body does give the Acer Swift 3X a notable weight advantage, with a 1.37kg frame that's easy to carry around for longer periods. It fits well within its stated mission of portability.

The keyboard is fine and serviceable, but that's about as far as I'd take it. Building anything on a 14-inch frame always invites some compromises of course, and for basic productivity work, it's absolutely suitable but not exciting or interesting by comparison.

The Acer Swift 3X features a 1080p camera housed in the top bezel of the display, but there's no cover or switch to disable it as you can find on some laptops. You do get biometric authentication for quick fingerprint unlocking, built around a thin strip under the cursor keys.

That's not my favourite positioning for unlocking, especially as so many laptops with fingerprint readers now incorporate them into the power button, so you can power up and unlock with one simple gesture rather than two. 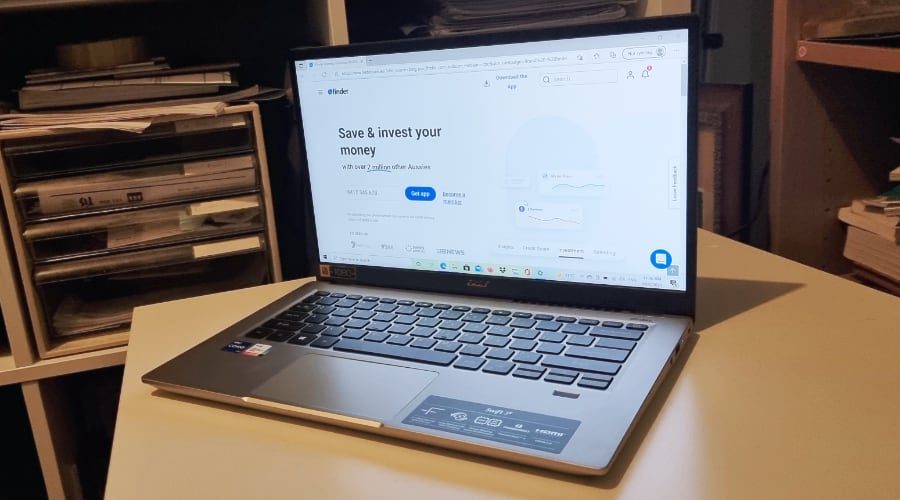 The Acer Swift 3X as supplied for review runs on an 11th Generation Intel Core i7-1165G7 processor, paired up with 8GB of RAM and a 1TB PCIe NVMe SSD. On the graphics front, you don't get an option for a discrete GPU, so you're instead relying on Intel's own Iris Xe Max solution with 4GB of RAM.

The days when Intel's own GPUs were laughable are thankfully well behind us, although folks eyeing off the Acer Swift 3X as a sneaky gaming platform when the boss isn't looking will have to moderate their expectations.

Still, the Acer Swift 3X impressed me with its general performance, both using it for productivity purposes and across a range of benchmarks.

You can spend more to get faster performance – especially for graphics-intensive tasks – but at its asking price, it is indeed quite swift. Here's how the Acer Swift 3X compares against a range of other productivity laptops in standard benchmarks:

The Acer Swift 3X ships with Windows 10 Home. At the time of writing the review, Microsoft's Windows 11 Compatibility checker was offline, but there's nothing here to suggest it shouldn't be 100% capable of upgrading to Windows 11 when it becomes generally available across late 2021/early 2022. 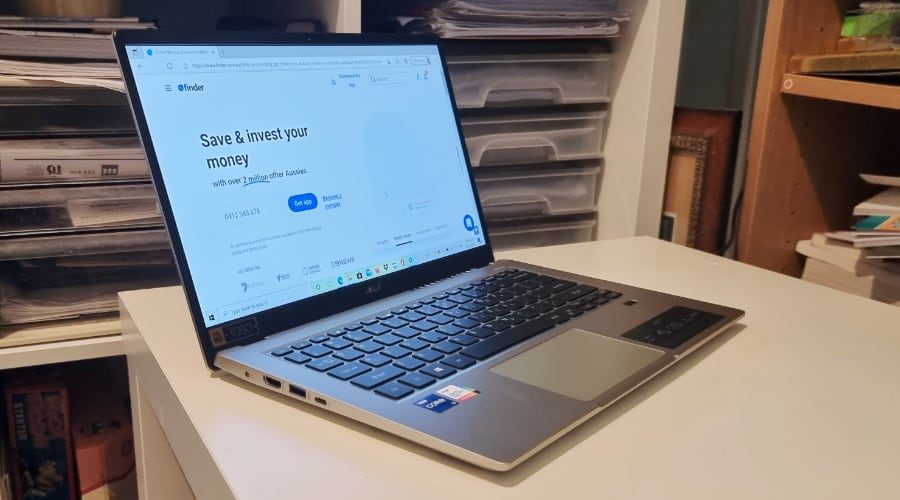 Acer's claims for the Acer Swift 3X are that its sealed battery is good for "up to" 17.5 hours of usable time. Manufacturer battery claims are often overblown, and there's a big challenge for any thin laptop in terms of battery life, simply because there's no easy way to pack extra batteries in while staying slender and light.

To put the Acer Swift 3X through its paces, I tested it across our standard battery benchmarks.

To get an idea of longer term range, a Full HD video was looped with maximum brightness and moderate volume to battery exhaustion. Then, to give an idea of worst-case battery life, PCMark's Gaming Battery benchmark was run. The Acer Swift 3X isn't a gaming laptop to speak of, but the point here is to show how well the battery holds up under stress.

Here's how the Acer Swift 3X compares against similar devices:

That battery figure for video is quite an impressive one, even if it does fall short of Acer's own 17.5-hour estimate. There's totally scope here for all-working-day battery life, depending on your workload. If you're pushing it hard, however, it will drop battery life pretty quickly, as just about any laptop would do.

Acer's supplied 65W adapter plugs into the side for faster charging, but the USB-C port is full Thunderbolt and power-delivery capable, so with the right USB-C charger, you could top up its power in an emergency. It wouldn't be fast, but it might give you enough juice to last until you could secure more regular power or your supplied charger.

Should you buy the Acer Swift 3X? 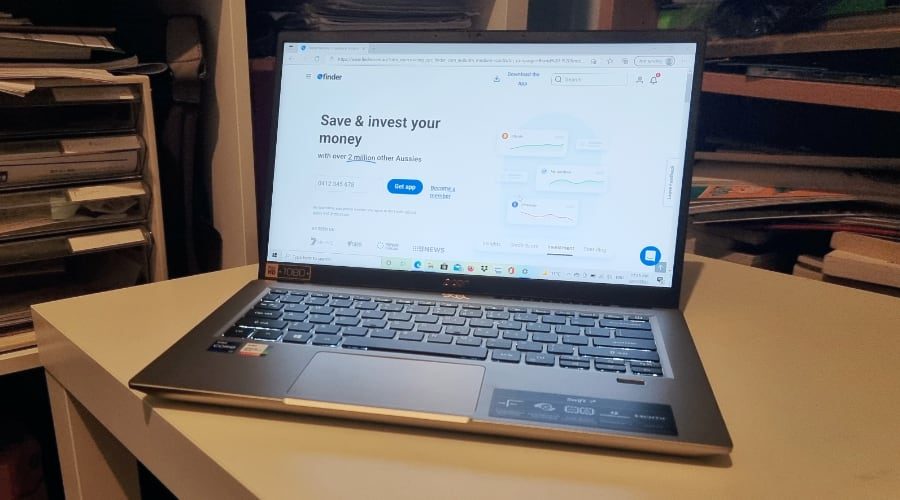 The Acer Swift 3X mostly lives up to its name, although thankfully not when it comes to depleting the battery. That's its clear bestselling point, so it's a good choice if you know you need a system that can run a good long time without access to a power point. The review was based on a week's intensive testing of the Acer Swift 3X, including benchmarking and day-to-day usage of it across a range of productivity and light gaming tasks.