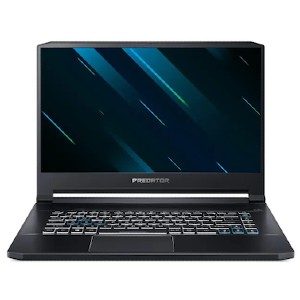 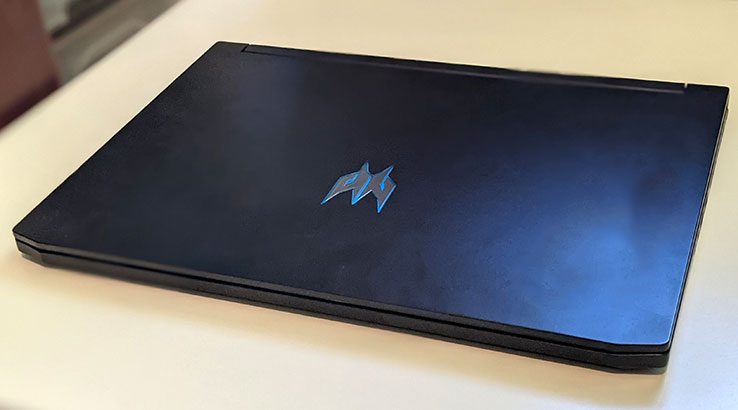 The Acer Predator Triton 500 is an imposing-looking 15.6-inch laptop that measures in at 17.90x358.5x255mm with a carrying weight of just 2.1kg, which is moderate for a mid-sized gaming laptop. The display sits above a noticeable "gap" above the hinge, giving it a slight floating feel whether it's sitting on your lap or on a desk. Like many gaming laptops, there's a small riser bump on the base to tilt it slightly towards you when it's on a desk, but this isn't so chunky as to preclude lap-based usage.

That primary display is a 300Mhz-capable 15.6-inch 1920x1080 pixel screen that sits above a simple speaker array and the keyboard itself. The speakers are perfectly functional for what they are with a reasonable level of punch, but there's really not that much clarity to their output. For dedicated gaming use, as always, a good gaming headset is recommended.

You really can't have a premium gaming laptop without an RGB keyboard, and the Acer Predator Triton 500 wastes no time at all letting you know that it's ready to glow. Every time you boot it up, it flickers lights across the keyboard – an effect I'm not terribly fond of myself. Like any RGB keyboard, once it has booted up, you can configure it to your own taste. Key travel is decent, although I'm personally not a huge fan of keyboards that split the enter and forward slash keys in the style that the Predator Triton 500 does.

The Acer Predator Triton 500 certainly isn't lacking in ports, with the left side accommodating power, full Ethernet, USB-A, HDMI and audio input and output, while the right side gives you two more USB-A type ports, a single USB-C/Thunderbolt port and Mini DisplayPort sockets. 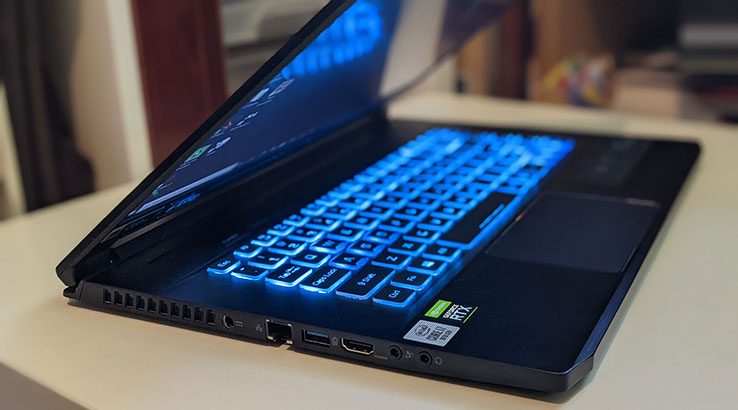 That's a recipe we've seen in other gaming laptops of late, most notably Lenovo's Legion 7i 2020, which we reviewed here. Commonality in PC parts is nothing new, and as always, it's what you do with that power that counts. As such, I could pretty much predict where the Acer Predator Triton 500 would score in standard benchmarks. Here's how it compares against a range of gaming-specific laptops:

The inclusion of that 300Hz-capable display helps in gaming titles, whether you're playing current cutting edge games or something with a few more years on the clock. Acer supplied the Predator Triton 500 with a copy of Square Enix's Marvel Avengers game and that ran very nicely indeed on the Predator Triton 500's display, as did fast FPS titles and slower strategy games. Frame rates remained rock solid throughout testing.

That's absolutely what you should expect when you're buying a gaming laptop these days because programming for most PC games still pushes towards more of a middle ground that these combinations of CPU and GPU can typically walk right over with ease.

If I've got a complaint against the Acer Predator Triton 500, it's that the cooling fans are very aggressive. On the one hand, you do want that to stop the laptop from cooking itself or engulfing your desk in flames. On the other hand, unless you are using gaming headphones, the noise of that embedded fan can get quite noticeable, especially if you hit the turbo button to allow the processor to slightly overclock. Frankly, if you're buying a gaming laptop that can overclock itself and you're not hitting that Turbo button at every opportunity, I'm not even sure why you bought it. 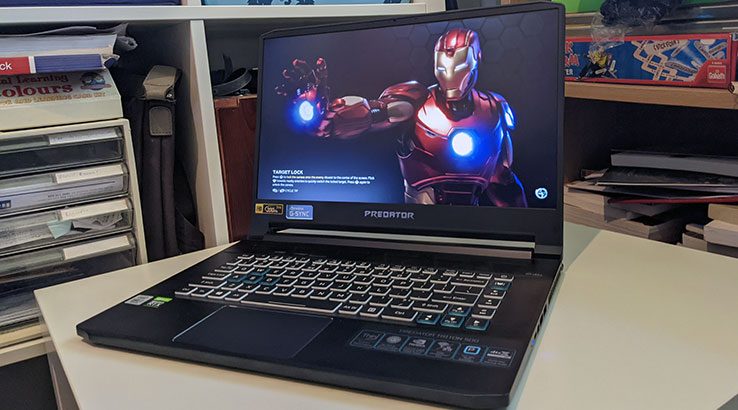 It's an utter cliché to say that gaming laptops have poor battery performance because it's totally the price you pay for all that power. Still, we've seen some models do better than others recently. Sadly, the Acer Predator Triton isn't one of those, posting some really low-end battery benchmarks even for everyday tasks.

Clearly, the use you put a gaming laptop will determine how long its battery can last, and to test that, I ran the Acer Predator 500 through a couple of different battery-usage scenarios. Our standard battery-laptop test involves disabling all battery-saving measures, pumping brightness up to full and setting volume to moderate before looping a 1080p video to battery exhaustion. To give the Acer Predator 500 more of a direct gaming test, I also ran it through PC Mark 10's gaming-specific battery benchmark.

Here's how the Acer Predator Triton 500 compared against a range of laptops that I've run those benchmarks through:

I strongly suspect that the Acer Predator Triton 500 is actively scared of not being plugged into power. Or maybe that's just my reaction to its battery life, which is really very poor, even by gaming standards. It's not entirely helped by the Predator 500 Triton's chunky charger either. While most gaming laptops really fit more into the "luggable" rather than "portable" space, I wouldn't want to have to carry around both the laptop and its charger for all that long at all.

Should you buy the Acer Predator Triton 500?

There's a lot of competition in the gaming laptop space, and Acer's Predator Triton 500 has its share of benefits and drawbacks. That display screen really does make the most out of the included CPU and GPU power, and that's a big plus. It's nicely equipped for expansion, and if you're a fan of RGB lighting, having each key individually configurable and the classic direction and WASD keys with lighting cut-outs is a nice plus.

However, when it's working hard, those fans really do kick in hard, and you'd never want to have to rely on it for any length of time when there wasn't a power plug nearby.