The marketing department is wrong – it's over 9000.

With its eye-catching, RGB-happy aesthetics and ultra-high-end components, the Predator Orion 9000 is a flagship Acer can be very proud of. It's priced to destroy wallets, but you're getting what you pay for here: phenomenal performance and unparalleled AAA gaming experiences.

I've messed with some high-end gaming rigs in my time, but I can scarcely recall one as heavy duty as the HAL 9...sorry, force of habit...the Predator Orion 9000. And I do mean heavy duty literally here. This thing is a 20kg, 1 x 2 x 2ft beast that comes with a pair of scooter-sized castor wheels. Not that they'll help you much if you have to lug it up and down a flight of stairs like I did.

That said – and after positioning the 9000 near my 4K HDR monitor, and seeing what wonders it could deliver to it – the lug was worth it. Best hernia I ever self-inflicted. Would hernia again. 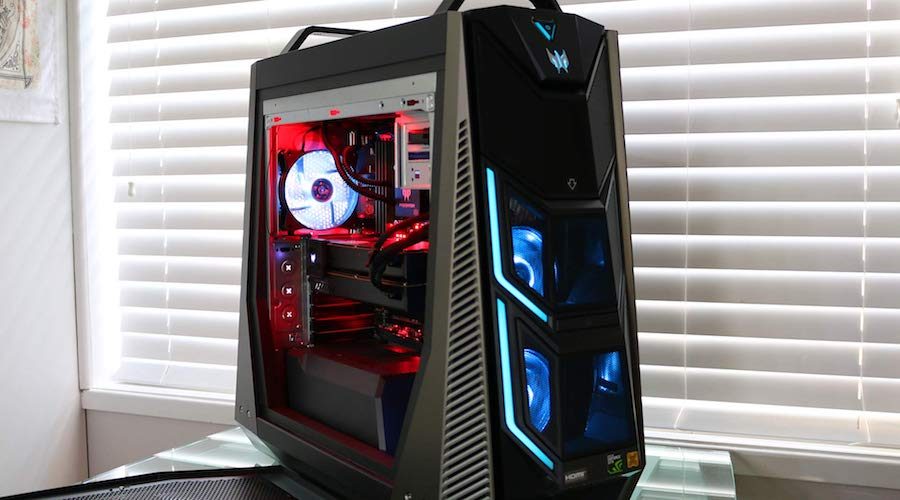 Unveiled in mid-2017 to much salivation, but only now available to the deep-pocketed among us, the 9000 is the epitome of no expense spared. It's power you can see, thanks to an angular, intimidating form-factor that catches eyeballs quicker than Kill Bill's master Pai Mei.

Even if you're typically unmoved by PC cases, like my long-suffering wife, you'll still swoon at these RBG-laden aesthetics. (She also made odd comparative comments involving “a hotted-up tuner car” and “a decapitated Decepticon”.) Conversely, if your friends and rivals know their tech, they'll take one peep through the 9000's glass window and instantly understand that they're standing on the wrong side of a velvet rope, gawping in at a pulsing discotheque of ultra-high-end gear.

The rub: this is going to set you back AU$10K. To put that into rough perspective, the 7980XE goes for AU$2,800 on its own, you'll pay roughly the same again for the RAM, and you're in that ballpark once more for the two GPUs.

This being Acer's flagship desktop gaming PC – “the most powerful PC [they've] ever built” – everything's been tied to a monstrous motherboard that can't be bought off-shelf. It offers masses of upgradability (three M.2 slots and four PCIe x16 slots) and in terms of connectivity you'll be getting two USB 3.1 Gen 2 ports, eight USB 3.1 Gen 1 ports, and two fairly redundant USB 2.0 ports. 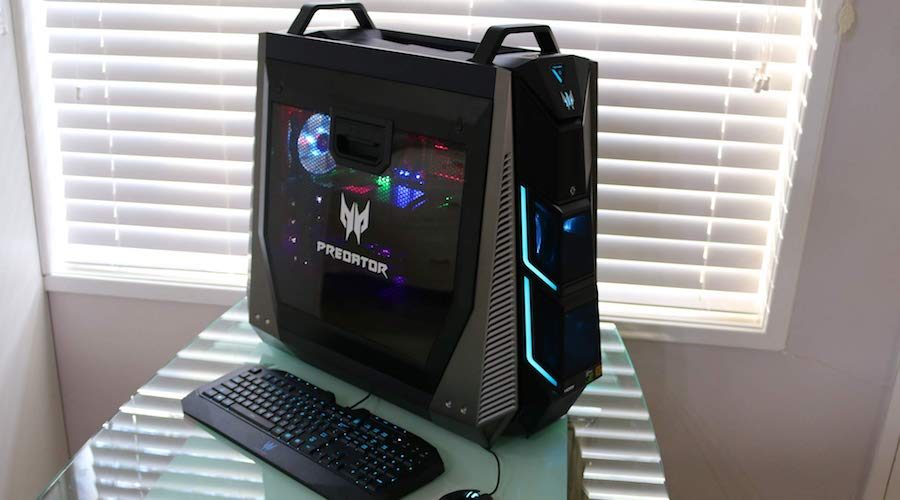 As mentioned before, the 9000 is a looker. It's all about aggressive, l33t gamer design, with a front bezel featuring faux-carbon fibre highlights angled to give one the impression that this thing isn't detectable by radar. On either flank, you have two quick-access side panels of tempered glass, each held in place by two screws apiece and a squeezable latch. Everything here is sturdily built and sensibly designed – and this is especially true of the two chassis-integrated handles on the top.

The black mesh encasing the two 120mm fans on the front is also used on two more on the top of the case, and it's the same again for the fifth one that sits above your backports. These fans, along with a dozen points on the motherboard and four strips on the front bezel, may all be lit with 16.7 million RBG colours and a variety of different illumination behaviours. When they're all set to rainbow and “breathing”, the 9000 is lava lamp levels of pretty.

Speaking of breathing, this unit features liquid cooling and Acer's IceTunnel 2.0 to separate the system into thermal zones that provide individual airflow tunnels to expel heat. It did an exceptional job in preventing this PC from melting through the floor like a dropped lightsaber, and it kept remarkably quiet about it, too, even after a full 24 hours of being overclocked via Acer's Predator Sense software. You can also achieve this via a large triangular “one-punch” turbo button on the front. Welcome back, early '90s novelty.

Taste is subjective, and I have few bad words to say about the overall design. Though the PSU shroud is a step in the right direction, the cable management isn't as good as it could be.

You don't need to ask if this thing can bench, bro. Every 3DMark test I attempted on the 9000 yielded absurd results (all listed above, along with Cinebench and Geekbench scores). I have a contemporary who regularly makes the top 10 worldwide leaderboards for the Time Spy and Fire Strike test variants – the sort of competitive jerk who I know would've dug deep to achieve his stratospheric numbers. The 9000 didn't beat him, but I was pretty gobsmacked to see it get inside the same ballpark – every test I did come back with a 99 percentile rank.

In terms of vigorous game testing, the 9000 basically looked at every AAA title I threw at it (always on 3840 x 2160 resolution) and shrugged. The chicken dinner test went quite well: you wouldn't believe how much more of a proficient a killer you are when PUBG's humming along at a 72fps average while set to 4K and screen-scale 120. Likewise, I didn't think the joy of murdering Nazis could get any sweeter until I saw every slider in Wolfenstein II cranked to “uber” with a 92fps average.

Other stand-out moments included Middle-earth: Shadow of War ratcheted fully to “ultra” and delivering a consistent 92 fps. Same deal with the still-sumptuous GTA V and The Witcher III which both delivered fps averages in the mid-70s.

And, for the mic drop: I beheld Destiny 2 purring along at 92 fps while set to the absolute the limit and upscaled 200% to 8K. Make no mistake, the Predator Orion 9000 is a madman. My eyes have traveled to the valley beyond, and I honestly have no idea how I'm going to return to my old, once-impressive rig when this review unit leaves.

God Of War nearly used Egyptian and Mayan mythologies Crisis on the Planet of the Apes VR review: Continue the research