This hot ticket keeps cool under pressure but is quite noisy about it.

Corners have been cut here and there with the Predator Helios 300 but the losses are within acceptable parameters and can be mitigated via plug and play solutions. This unit promises the Sun for a small sum and more or less delivers.

From a price-to-performance perspective, Acer's Predator Helios 300 is as godly as its namesake. Asking a mere $1900 while providing beefy specs that all but mirror a $2900 Razer Blade 2017 is an amazing deal. That said, being the savvy consumer you are, you're probably already wondering what sacrifices have been made elsewhere to achieve this and if the Helios is taking you for a (chariot) ride.

What we have here isn't the perfect ultrabook, but when it comes to delivering AAA games with aplomb on-the-go, Acer delivers mostly where it counts. One or two things are amiss, but you can go in with your sky-high expectations intact and the Helios will still shine.

The prime directive of this thing is gaming and it's well covered with a more-than-respectable GeForce GTX 1060 with 6GB of dedicated GDDR5 VRAM. To better put the Helios in perspective, it's a mid-range gaming laptop that lacks the screen-tearing preventative known as G-Sync, a high-refresh screen and a few other bells and whistles found in Acer's much more expensive Predator 17.

Be that as it may, the few downsides I've found in the Helios can be mitigated in certain ways. At this low price, and with these tasty innards, it's not to be ignored. 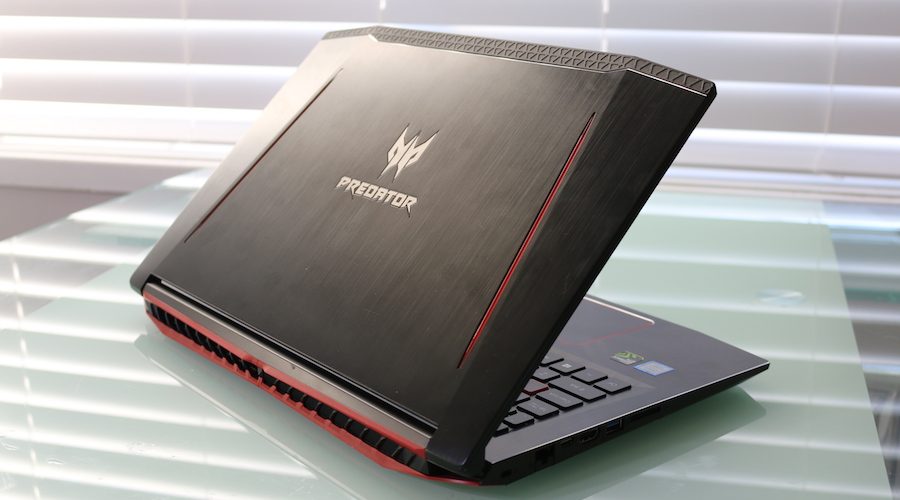 Let's get the few cons out of the way early. The touchpad hanging off to the left (rather than aligned to centre) isn't my bag. Using a keyboard and mouse on a desktop makes you accustomed to having your hands quite far apart, and this feels like your mitts are needlessly corralled into an almost controller-like space. It's not a problem for gamers since they'll plug in a high DPI mouse anyway.

I do like the look of the Helios 300, however. The base feels about as strong as an aircraft carrier (and roughly the size of one) and I did appreciate the brushed aluminium look with the out-of-my-face aesthetics. This isn't as blatantly “gamey” a laptop when compared to its forebears. You have minimal (unlit) red accents on the lid, a decepticon-like Predator logo and the backlit keyboard can be switched from “psychotic red” to nothing at all. You could whip this baby out in a business meeting and not feel a sense of man-child shame.

You'll want to dial down the overclocking in the PredatorSense software before you do that, however. On “Max”, the rear exhaust fans escalate from acceptable to distractingly loud, even if the Helios is just idling. This racket will be largely projected away from you, so you'll be spared while this effective cooling system does its thing.

That said, Johnson from marketing will be blasted with a white-noise hiss spewed across the boardroom table. Turn it down or embrace it as an alpha move of office dominance – your call.

Speaking of displeasures of the ear: the speakers on the Helios are a large con. They're downward facing for starters, so you're going to have to crank them to the point of distortion to get over the roar of the aforementioned fans. Once again, it's irritating but not a problem for gamers who'll be wearing decent headphones anyway.

Looking around the sides of this laptop, you're getting some no frills I/O here. The Helios offers two USB 2.0 A ports, only one USB 3.1 Type-C (no Thunderbolt 3 support, sadly), LAN, a card reader, HDMI out and the obligatory headphone/mic jack. There's also a precise and reliable trackpad recessed snuggly into the base. 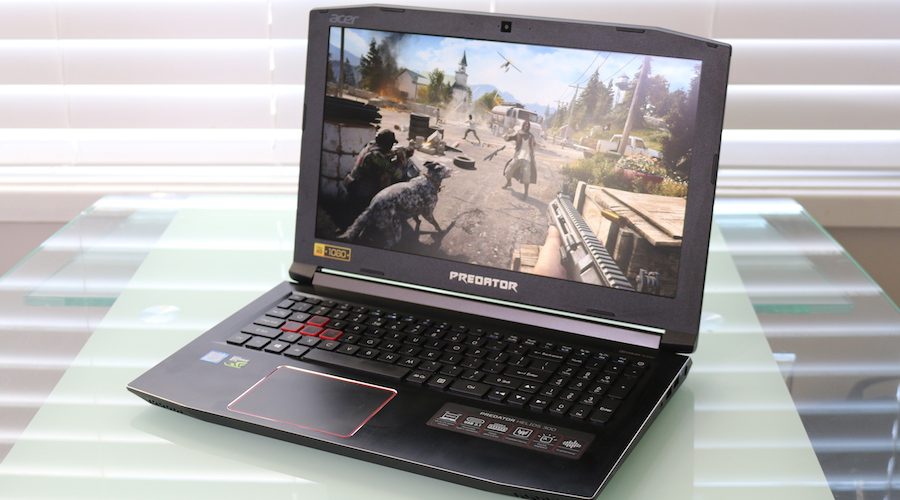 The AAA games I threw at the Helios had to run through a 15.6” IPS screen which, at a max resolution of 1080p, won't set anybody's eyeballs on fire. It's a tad unimpressive in terms of colour reproduction, covering just over 50% of the sRGB gamut. This, coupled with a max brightness of just 289cd/m2 and a response time of 34ms, won't please uber-competitive FPS gamers. For non-MLG types, this is perfectly fine for an on-the-go experience, and you always have the HDMI 2.0 out if you want to do your games justice on a higher res monitor with better Hz.

Unfortunately, Acer has decided to skimp in another area by outfitting the Helios with a non-removable 48Wh lithium-ion battery. The official website may say seven-hour run time, but gaming under a decent load will get you a bit over an hour. The obvious insult to that injury: I've noticed that the GTX 1060 performs considerably worse in battery mode.

The better news is that a GeForce GTX 1060, combined with the Intel Core i7-7700HQ, delivers very decent gaming results when hooked up to some mains. As a general rule of thumb, you can expect to smoothly run AAA games released in 2017 and earlier on Ultra settings at 1920 x 1080.

For example, the chicken dinner test in PUBG yielded an average of 50 fps (drop it to High and the VRAM consumption lowers and you can achieve that 60fps sweet spot). A much better-optimised shooter like Battlefield 1 fares a helluva lot better on its Ultra settings, I was happily sniping the Kaiser's finest with an 84 fps average. Also, Overwatch is even more impressive with 152 fps when set on High. By and large, blasting people online won't be a problem for you if you've got the requisite skills.

For my open-world gaming tests, I slid into the boots of Geralt and went riding around on Roach in The Witcher 3. I could only manage to coax a smooth-but-not-amazing 48 fps out of this complex and beautiful sandbox. Ultra settings for Ghost Recon Wildlands, The Division and Grand Theft Auto V were much more impressive at 63, 77 and 103 fps respectively.

Bottom line: this bad boy can take anything you throw at it and the results are perfectly controllable and smooth looking. Factor in the impressive value for money and the Predator Helios 300 is yet another triumph for Acer.