The Electric Coin Company is being sued, highlighting the sheer messiness of the Founders Reward scheme.

The Electric Coin Company (ECC) is one of the key entities behind Zcash, one of the world's foremost privacy cryptocurrencies. It's now being sued by former employee Simon Liu over allegations that it failed to compensate him as agreed for his work.

Here's what allegedly happened, according to the lawsuit:

Show me the electric money

The "units of stock" referred to in the lawsuit are "membership units" in ECC. This is both an equity share in ECC itself as a business, plus the system by which the Zcash "Founders Reward" (FR) is distributed among founders and vested ECC employees.

The FR is a cut of all the Zcash coins (ZEC) being mined. It is currently 20% of each block reward, and will eventually drop to 10%.

According to the latest ECC financial report, the total ZEC mined each month in the second half of 2018 were being distributed like so: 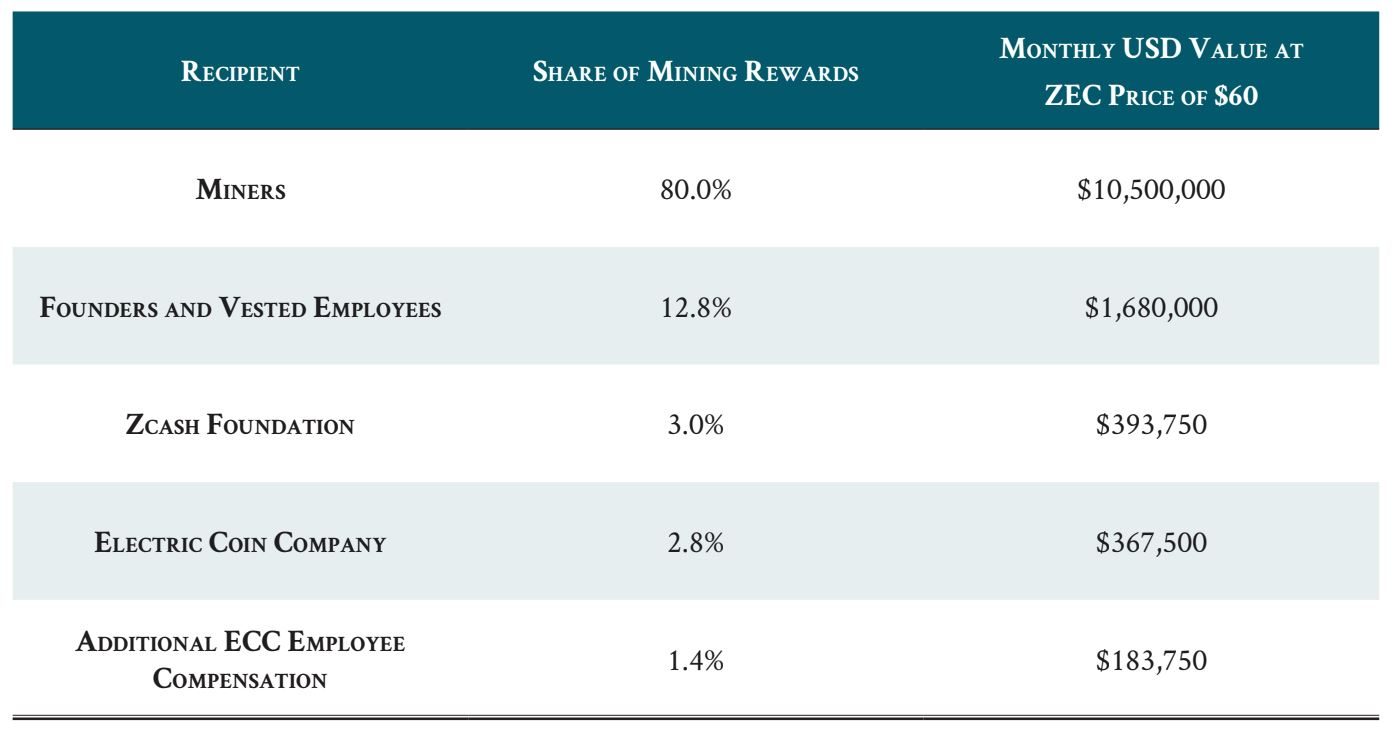 The top 80% is the portion that goes to miners, the bottom 20% is the combined Founders Reward.

Meanwhile, the total ECC monthly operating expenses were $700,000 per month, it says, distributed as such: 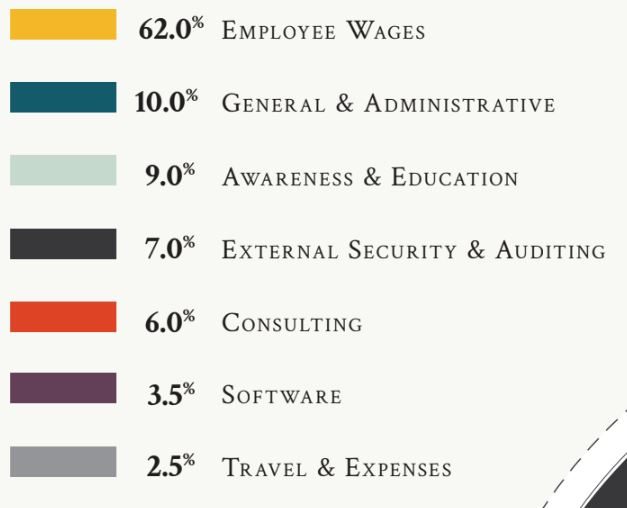 The Electric Coin Company budget, as you can see, is only getting $367,500 of that though. It's operating at a significant loss, which the financial report happily admits.

"The company's operating cost in the second half of 2018 averaged $700,000 per month. An additional $180,000 a month was used for employee compensation during the period. As such, the company has been running at a significant deficit," it shrugged.

The company has about $5 million in ZEC and USD in the bank, and assuming everything stays as is, it will be out of money by October 2020.

The Electric Coin Company has made no secret of the fact that it's walking on thin financial ice.

Something doesn't add up?

The total ECC annual operating budget is $8.2 million and it's going broke, while the company's CEO is getting $1.464 million per year. Assuming these numbers are correct, the Electric Coin Company CEO's earnings are equivalent to 17.85% of the struggling company's annual budget.

Even in a world of disproportionately high-flying executives, that's pretty wild.

Of course, you can't really separate the amount going to founders and vested employees from the company's finances itself. The Founders Reward is hardcoded into Zcash as a system that currently diverts 20% of the mining rewards to the specified Founder wallets, so those founders, including Wilcox, are directly funding the Electric Coin Company with voluntary donations of their own. That's where the 2.8% comes from.

This means that if you're not a founder, your payment as an employee of Zcash is dependent on good old fashioned employment contracts and trust. If the lawsuit is true, it's a trust that's being abused.

"[ECC] also promised to compensate [Liu] by paying him a share of the 'Founders Reward' in proportion to his limited liability company ownership equivalent in option membership units," the suit says. "[ECC] did not have authorisation to issue common stock to employees in 2016... [ECC] did not grant any incentive stock option to [Liu] to purchase Zerocoin's common stock."

Perhaps recognising the disproportionate amount of funding being diverted to the founders and vested employees, the ECC agreed to release additional share units in in June 2019, which was allegedly one of the things that sparked the lawsuit in the first place.

And then there's the Zcash Foundation, which is getting a bigger slice of the funding than ECC itself for performing what sounds like a very similar function. It's being funded by a pre-agreed portion of the Founder Rewards.

"The Zcash Foundation's mission is to be a public charity dedicated to building Internet payment and privacy infrastructure for the public good," it says of its purpose in life.

"Electric Coin Co. builds software in support of our mission to empower everyone with economic freedom and opportunity," the company says of its purpose in life.

Some cryptocurrencies created non-profit organisations to serve as the chief entity behind their projects, while others created for-profit business entities. These entities have typically been funded with ICOs or pre-mines.

Zcash created both, and then funded them both with a system that doles out ongoing mining rewards to a small handful of key players who then voluntarily fund these two organisations. It's quite different.

And then things got weird

What started as an effort to imbue the organisation's finances with a new level of transparency have also made the entire thing wonderfully opaque and complicated.

This is reflected in Liu's lawsuit. Not only is it targeted at the Electric Coin Co. itself, but it's also aimed at 50 anonymous "John Does" who are together alleged to have breached their contractual obligation to grant equity (a share of the Founder's Reward) to him.

Presumably, those John Does are Founders Reward recipients who agreed to dilute the supply of Founders Reward units to help address the funding crunch the Electric Coin Company – the company rather than its mish-mash of investors and founders – are experiencing.

So who's going to foot the bill for this lawsuit? And how about the next lawsuit, and the compliance hurdles bound to face a company that's building an anonymous digital currency? The Electric Coin Company itself, as a business, certainly doesn't have the budget.

Alms for the tech company

The Founders Reward was meant to encourage long term interest in the wellbeing of Zcash, but it functionally appears to have turned into a system where a business is dependent on charitable donations from its own founders to manage routine expenses.

History says that those founders have not tended to be overly generous. Plus, like any open cryptocurrency, Zcash is largely dependent on volunteers to survive, but there's not a lot of incentive to start volunteering when there's also a team of well-paid founders and investors hanging around.

The Founders Reward is also a revenue model that doesn't offer much room for flexibility or growth in the Electric Coin Company business itself. You can't easily hire people to expand as needed – especially if they want to be paid in real money rather than ZEC – and you're also firmly wrapped up in the volatility of crypto as a whole.

It also means there's a constant undertow of selling pressure running through Zcash from the founders and miners who need to fund their operations, and if the most recent ECC financial report is any indication, another price drop could be disastrous for the Electric Coin Company.

If the company goes under, who's going to pay its creditors? What about back-pay for its employees, or suppliers? Will the courts try to garnish the Founders Reward? Plus, if ECC goes bust, ZEC prices would almost certainly plummet, instantly making everything worse for everyone.

If ECC is necessary for Zcash, it probably needs a more reliable funding mechanism than those founder donations. And if it's not necessary, why does it exist?

Zcash is a grand experiment in more than one way, but it's having a tough time in the face of real-world conditions.