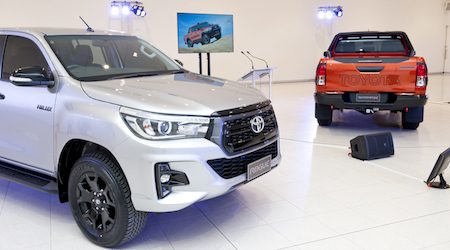 Designed in Australia especially for the Australian market, the new Toyota HiLux Rugged, Rugged X and Rogue combine bold aesthetics with functionality for a variety of terrains and lifestyles.

Speaking at a facility tour ahead of the launch, Toyota Australia's product planning and development general manager, Rod Ferguson, said the new models were driven by trends and feedback from Australian consumers.

“Our guests love to add genuine accessories and after-market components to their HiLux, so we looked at where they were spending their money and soon realised there was a big opportunity,” he said.

“What if we enhanced the new HiLux range further by delivering a uniquely Australian package, developing additional components, integrating them fully with the vehicle, with a factory-backed warranty? In addition, we identified an opportunity for a grade above SR5.” 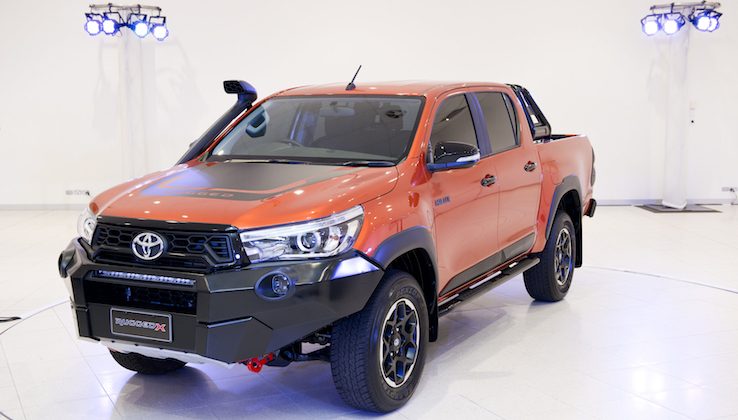 In a presentation about the new "halo" HiLux vehicles, Toyota Australia design manager, Peter Elliot, explained the differences between them and other HiLux models, starting with the Rogue.

We saw it as a genuine lifestyle vehicle, something for having fun with your mates. But there’s also a sense of authenticity and there’s a sense of style that’s kind of synonymous with that particular product.”

This is reflected in features such as a stronger look in the front grill, a bash plate below it and a hard tonneau lid over the rear tray. Elliott said that the grey, metallic and black colour scheme was also a key part of the design.

“That threads its way throughout the entire vehicle… and just gives it that real sporty, menacing kind of look at the end of the day.”

The Rugged X, on the other hand, is designed with capability in mind and Elliott said there were “massive changes compared to the SR5”.

“Most of it’s centring around the bumper system [which] is really pivotal to what this vehicle is all about, in terms of it’s being a complete steel system, with integrating lighting, bash plate and recovery hooks.”

He said the team also redesigned the upper grille to include more “strong textures”, added red recovery hooks at the front and the back, created a lighting system that optimises performance and added new rock rails to the sides.

“The rock rails were a really cool design exercise for us because at its core it had to be a rock rail and it had to…protect the lower part of the vehicle. But also we wanted to add a little bit of step functionality as well, so there’s some pads on there you can actually step on, get up and access perhaps what you’re doing on the roof or sports bar et cetera.” 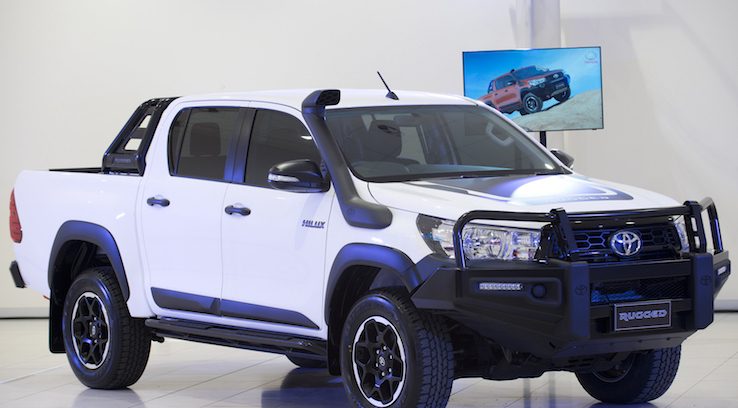 In contrast to these two designs is the Rugged, which is focused on toughness and off-road performance and includes a hulking steel bull bar. Ferguson said this version was designed to meet the needs of a specific type of customer.

“For some customers that are using it in different environments or different applications, they like the idea of [the Rugged X but they need a different front end," he said.

“We’ve offered two variants of the Rugged based off of that reason.”

All three vehicles are the result of an extensive, three-year development program carried out by the company's Melbourne-based designers and engineers. This included computer simulations, prototype manufacturing, bench testing and real-world assessments to confirm the strength and durability of the designs.

"They demonstrate our ability to develop a wide range of components and integrate them with the vehicle, specifically for the Australian market," Ferguson said.

The HiLux Rogue, Rugged X and Rugged were showcased as part of a media tour at Toyota Australia’s design studio in South Melbourne on Thursday 22 March 2018.