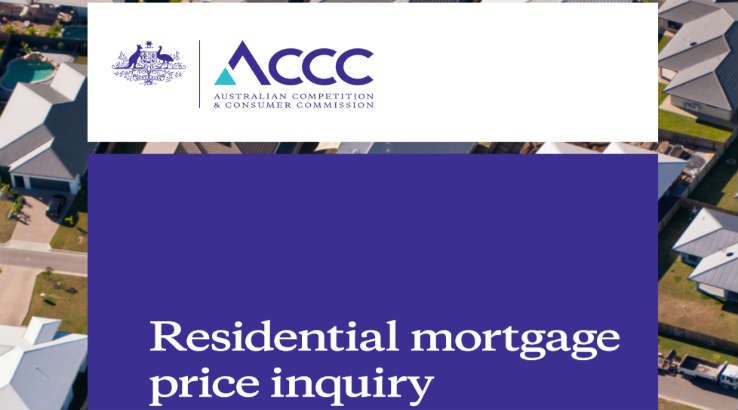 The Australian Competition and Consumer Commission (ACCC) has been conducting an inquiry into the mortgage pricing decisions of Australia's big banks. Findings from the commission's interim report suggest that consumers need to look closely at rates offered by the major lenders to determine what discounts really mean and to look beyond basic home loans when shopping around.

Background to the inquiry

Australia's "Big Four" banks are under scrutiny, and the treasury has tasked the ACCC with investigating how these lenders price their residential mortgages. The ACCC has compulsory information gathering powers, meaning it can obtain an enormous amount of documents and data from the banks. Commonwealth Bank, Westpac, ANZ and NAB collectively hold around 75% of Australia's residential mortgages.

The interim report will be followed up by a final report in June.

To save you time, we've read through the Residential mortgage price inquiry interim report and pulled out the key findings for Australian mortgage holders and future mortgage holders.

1. It's hard for borrowers to really compare mortgages

The big banks offer discounts on their headline interest rates, often as large as 78-139 basis points.

But these discounts are not always easily discoverable for customers and are often determined by opaque criteria, including risk profile, the borrower's location and the bank's own appetite for new business.

A borrower may not be able to discover the discounts they're eligible for until they actually lodge an application. This makes it hard for consumers to make accurate comparisons because of the time and effort involved in an application, and the fact that mortgage applications often occur as a final step once a borrower is ready to buy a home.

Budget or basic "no frills" home loans are popular mortgage products. They're typically standard variable rates with fewer features like offset accounts. They're often marketed as the cheapest, entry-level products for new homebuyers.

But for existing borrowers, discounts mean that, in practice, the rates for standard variable loans often work out cheaper than the basic loans.

3. But new borrowers overall are paying less than existing borrowers

4. Pricing between the big banks is not all that competitive

In news that probably won't shock anyone, the ACCC has found "a lack of vigorous price competition" between the big banks.

Interest rate decisions are based around strategic considerations of what the other big banks are doing, with little concern for the decisions of smaller lenders.

What does this mean for consumers?

The ACCC's report is a helpful reminder that the ordinary Aussie homebuyer needs to really do their home-loan homework.

While it can be convenient to stick with a big bank (and most of us do), there are more than 100 smaller lenders out there and they often have lower rates.

And if you are getting a mortgage with a major bank (and there are plenty of good reasons to do so), don't accept the lowest rate at face value. Dig into the details, do your repayment calculations and shop around. And it never hurts to try and negotiate a discount.

Perhaps the biggest message from the report is for existing borrowers. If you're a few years into your mortgage, you've missed out on some big discounts on rates. Ask your lender to switch you to their lowest rate for new borrowers. And if they can't, or won't, compare your options and refinance.