If you're a weekday commuter who loves to head further afield on the weekend, there's some real merit to the 2022 Mitsubishi Eclipse Cross PHEV.

Mitsubishi was among the first to bring a plug-in hybrid electric vehicle to market with the Outlander PHEV in 2013, but it hasn't been until more recently that plug-in hybrids have really started to gain traction. 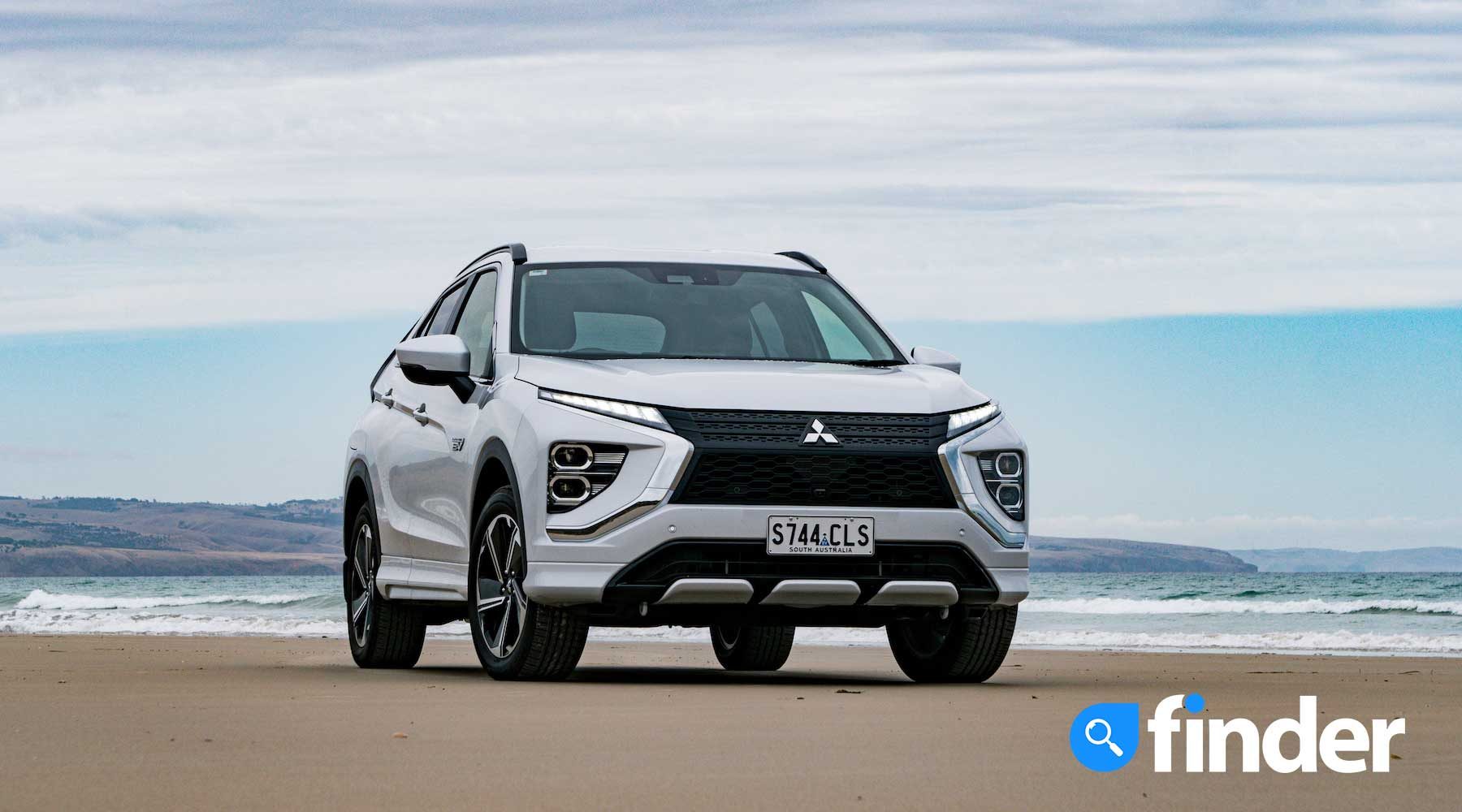 That's why it's timely for the triple-diamond brand to launch just its second plug-in hybrid now with the 2022 Mitsubishi Eclipse Cross PHEV.

While a facelift in 2021 smartened up the divisively-styled Eclipse Cross in a much-needed way, electrifying the model only brings it even more up-to-date.

Tested here in middling Aspire specification, it comes priced at $49,990 before on-road costs. However, the entry-level ES comes in at just $46,490, while the range-topping Exceed is priced at $53,990.

While some big changes can be seen on the outside of the 2022 Eclipse Cross, particularly at the rear, the general cabin design remains largely unchanged and still feels a touch dated as a result.

There's no digital instrument cluster to be seen here, with merely a small display between 2 analogue dials. Similarly, it only features an 8-inch infotainment system when many rivals offer screens over 10 inches in size.

At least this new infotainment system is a marked step up from the old unit which used a track pad to control it. Now touchscreen-only, it does display some useful information regarding the hybrid system's functions.

However, Apple CarPlay and Android Auto still require your phone to be plugged in rather than operating wirelessly, while satellite navigation is reserved for the Exceed model. 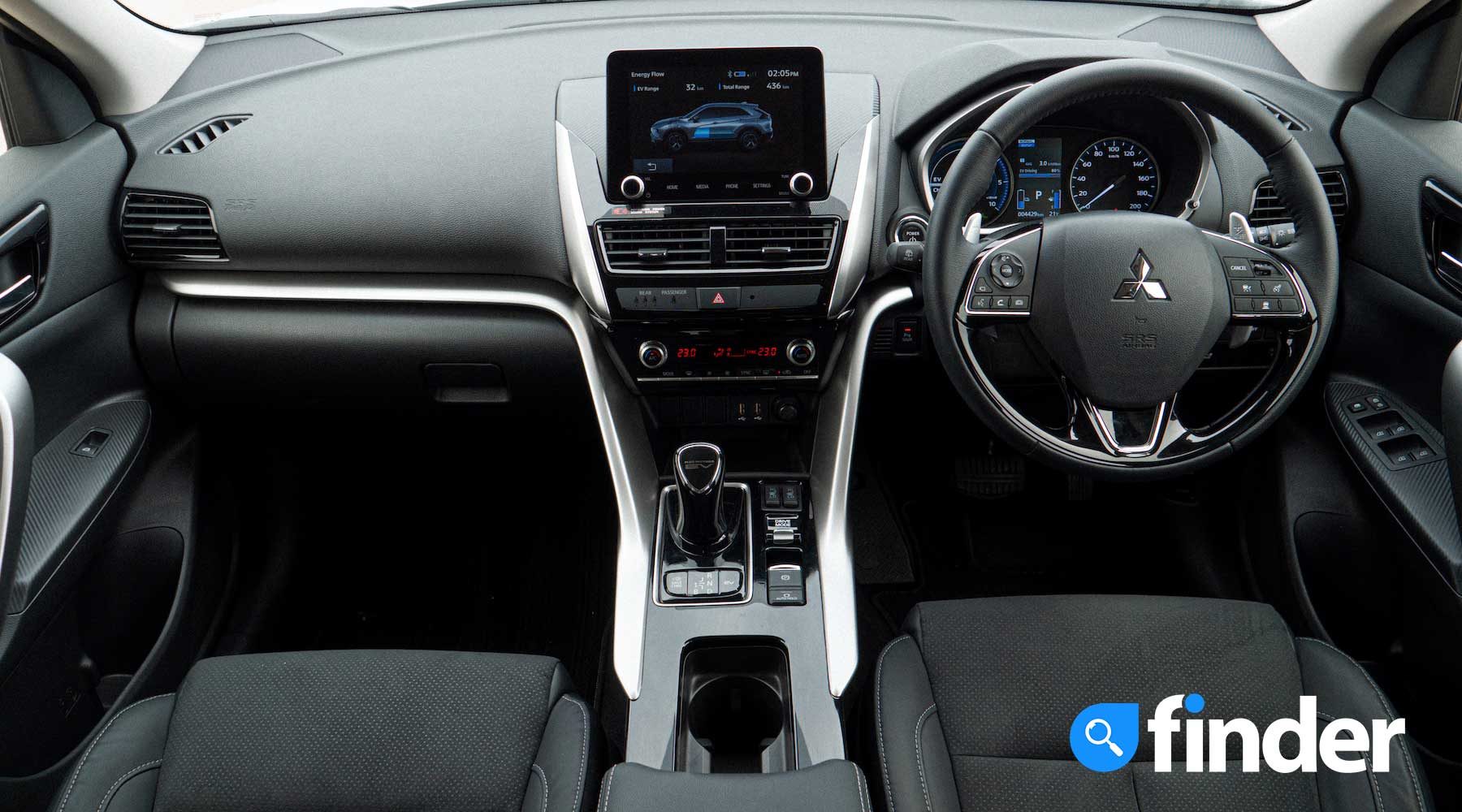 The Aspire variant on test here does position itself well in the range though, boasting suede seat upholstery, heated front seats, electric adjustment for the driver's seat and leather-wrapped elbow rests.

The front seats offer decent side bolstering, although they could do with a little more lumbar support for longer drives. There's a good amount of legroom both front and rear, along with plenty of headroom for taller folks.

There's a decent array of tech on offer as well, including a 360-degree camera system, automatic duel-zone climate control and an 8-speaker Mitsubishi Power Sound System.

Given the hybrid's battery pack has to go somewhere, boot space is slightly limited in the Eclipse Cross PHEV. Just 359 litres of boot space is on offer with the rear seats up, a 46-litre penalty, expanding to only 626 litres with them folded down.

Do consider as well that there's no room for even a space-saver spare tyre, with a fix-a-flat kit included instead. There is some under-floor storage which is handy for stowing charging cables, though. 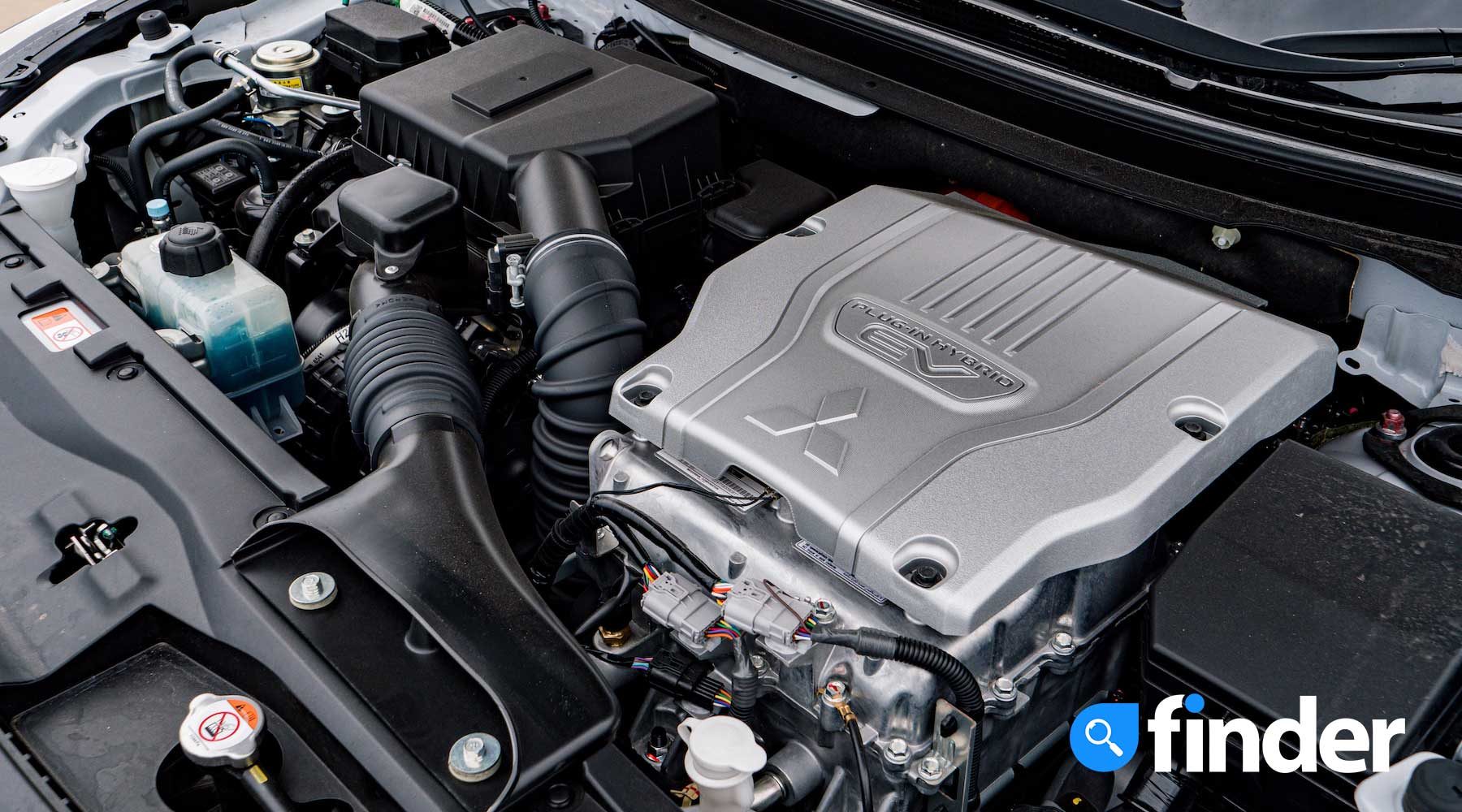 What's under the bonnet?

The petrol engine at the heart of all 2022 Mitsubishi Eclipse Cross variants is a 2.4-litre naturally aspirated 4-cylinder which produces 94kW and 199Nm. The petrol engine is able to either power the front wheels through a CVT automatic, or charge the 13.8kWh lithium-ion battery pack when required.

That battery pack powers a pair of electric motors – the one up front produces 160kW and 137Nm; the one in the rear adds 70kW and 195Nm. Both working together constantly when employed, they give the Eclipse Cross PHEV all-wheel drive.

When driving on electric power only, Mitsubishi claims it can cover 55km on a full charge. On the combined cycle, fuel consumption of 1.9L/100km is estimated.

To help recover lost energy when braking, the Eclipse Cross PHEV has 5 levels of regenerative braking which can be selected using the column-mounted paddles behind the steering wheel. 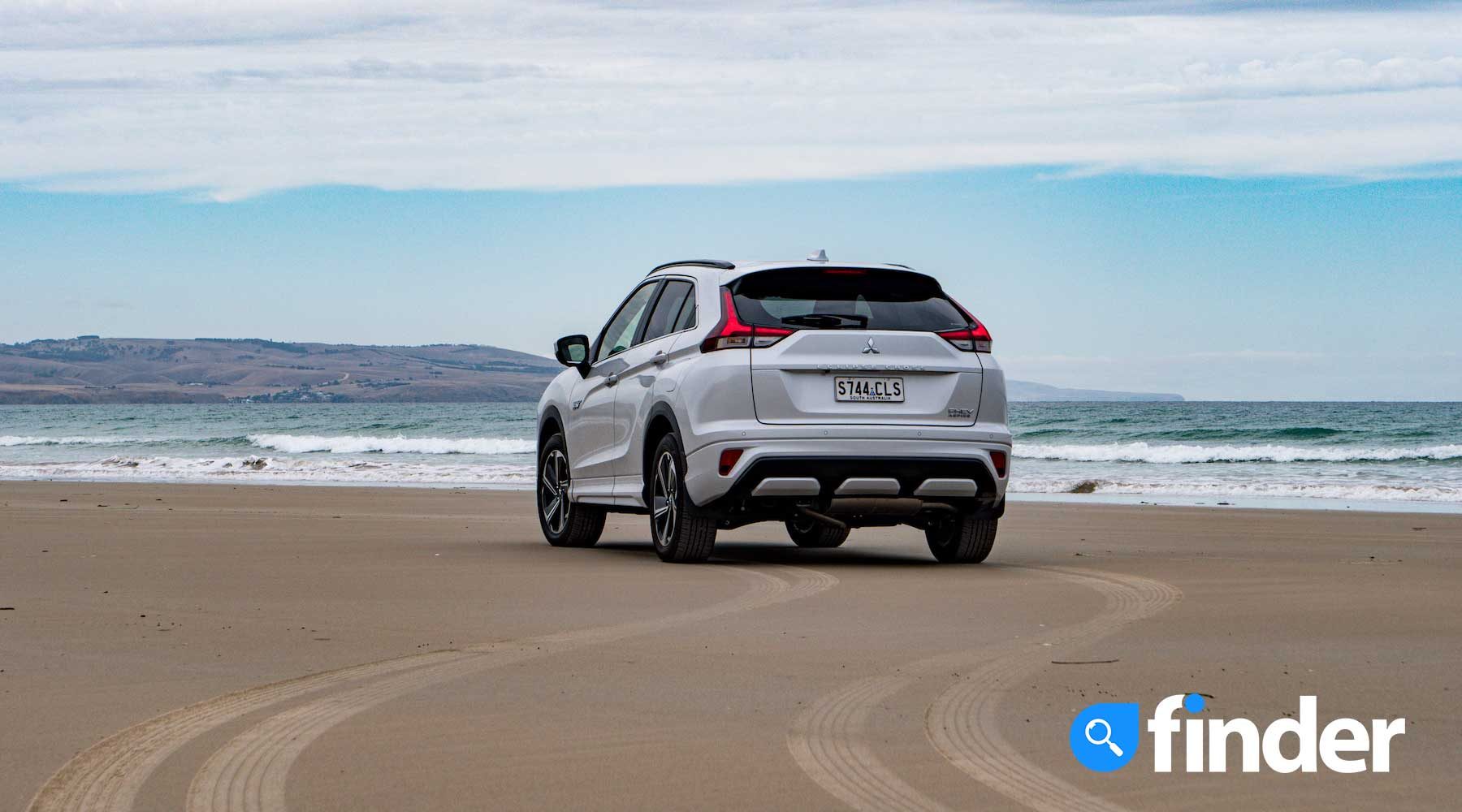 It's when running on electric power alone that the 2022 Mitsubishi Eclipse Cross PHEV feels to be operating at its best. With incredibly smooth power delivery, the slight rear bias due to its electric motor set-up and rally-bred S-AWC all-wheel drive system gives it a natural acceleration feel.

It's quite the opposite when it comes to the petrol engine, however. Sounding thrashy and gruff, it feels particularly laboured under harder acceleration both because of its limited power outputs and the CVT that backs it which has the characteristic rubber band feel.

Ride quality is fairly good, with it soaking up typical city road imperfections with ease. Admittedly, the suspension's rebound is a bit hard over constant undulations and corrugation as you'd find on country roads. Consider, though, that this is a city car first and foremost.

Adding to its city-friendly nature is its fairly light and easy power steering, which combined with the 360-degree camera and surround parking sensors makes parking a breeze.

The steering could perhaps do with a little extra weight to help it feel more sure-footed on the open road. The Eclipse Cross isn't exactly what you'd call a corner-carver, although it's handling does feel to have been improved, particularly with the battery pack lowering the PHEV's centre of gravity.

Also worth mentioning is that your ability to achieve the promised fuel consumption figures will depend entirely on how you use it. If most of the driving you do is only covering short distances around town, you'll be able to do most journeys with hardly burning a drop of fuel at all.

If your commute requires a stint on the freeway or you're heading on a trip further afield, you'll need to rely more heavily on the petrol engine. With a mix of both driving conditions as we covered in our testing, expect returns of between 3.5 and 4.0L/100km. 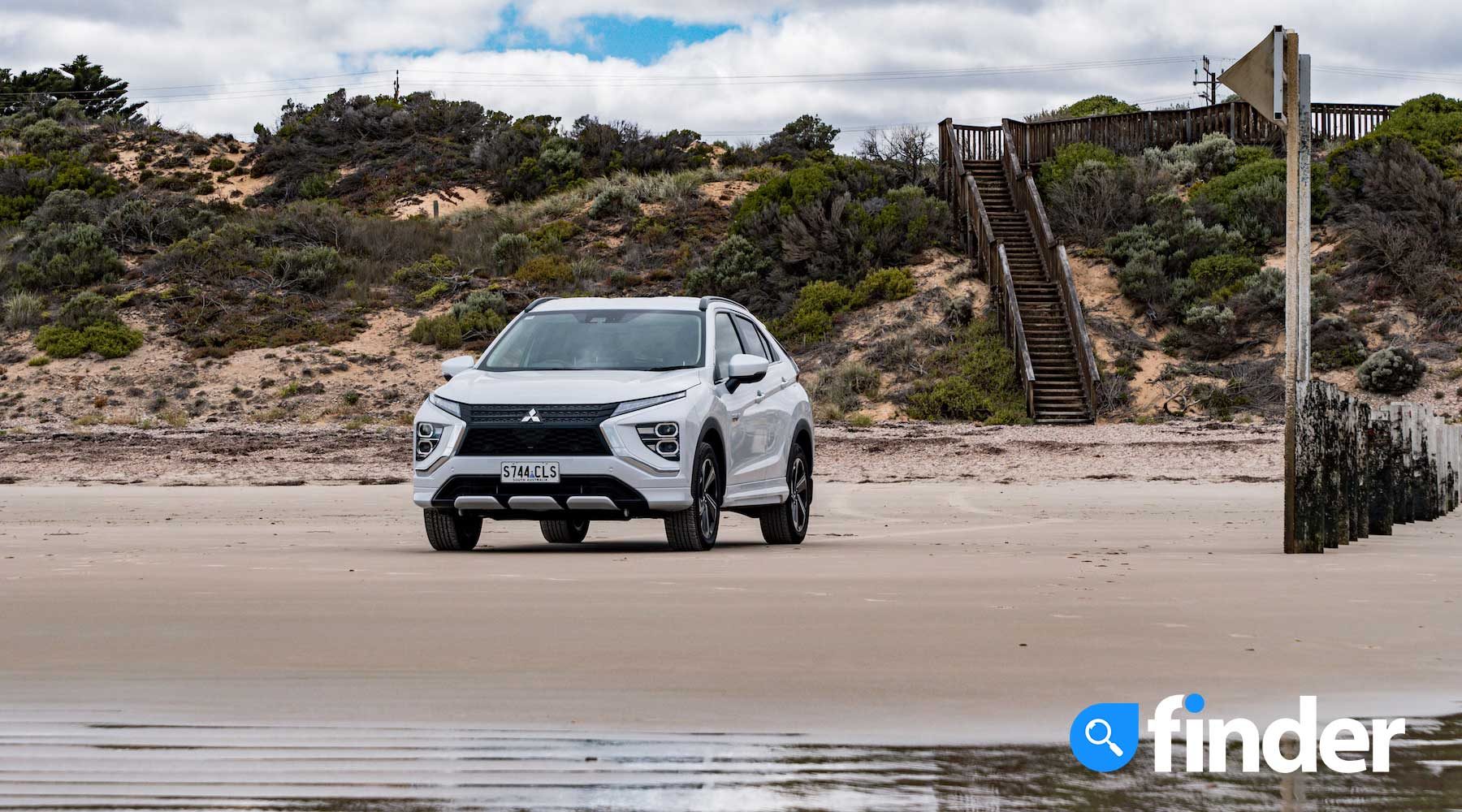 How safe is the 2022 Mitsubishi Eclipse Cross PHEV?

All 2022 Mitsubishi Eclipse Cross variants boast the maximum 5-star safety rating from ANCAP based upon 2017 testing. It scored 36.9 out of 38 for adult occupant protection, although its child occupant protection score was just 38.2 out of 49.

All 2022 Mitsubishi Eclipse Cross PHEV variants including the base ES come standard with the following safety equipment:

Stepping up to the Aspire model tested here adds:

Move up even further to the Exceed model, and you'll gain:

All 2022 Eclipse Cross variants are covered by the Mitsubishi Diamond Advantage ownership plan, which offers an industry-leading 10-year/200,000km warranty, along with 10 years/150,000km of capped price servicing.

Do be aware though, that the 10-year warranty only applies if you have your vehicle serviced with a Mitsubishi dealer. Should you use a third-party for servicing, you will only be afforded a 5-year/100,000km period of warranty coverage.

However, it's likely you'll want to take it to a Mitsubishi dealer given the capped price servicing duration, where it will cost you the following for each of those services:

While still feeling its age in some areas, the facelifted 2022 Mitsubishi Eclipse Cross does mark a considerable upgrade over its predecessor, with this plug-in hybrid driveline marking its greatest step forward considering the market climate.

Certainly, it offers considerable fuel savings for those driving primarily in the city, but for those travelling further afield you won't be able to match the claims or the real-world efficiency of some other plug-in hybrids.

Consider the hefty price increases over the regular 1.5-litre turbo model – call it roughly $15,000 on average across the PHEV range – and the savings won't add up for country buyers.

If you're a weekday commuter who loves to head further afield on the weekend though, there's some real merit to the Eclipse Cross PHEV. Relying on electric power for the trip to work while the petrol engine alleviates range anxiety, it makes sense as long as you know how to get the best out of it.

Our car reviews combine multiple reviews into one to help you save time when looking for your next car. You might also be surprised to see how much you could save by comparing car loans and car insurance while you're here.

Patrick Jackson is a journalist covering automotive news for Finder. He has written about cars for over 6 years, gaining first-hand experience testing over 300 new and classic cars during that time. He has worked with DriveTribe, Vehicle History, WhichCar and the Adelaide Hills Herald. He founded his own website, Drive Section, in 2019. Patrick has a Bachelor of Communication and Media from the University of South Australia with a major in journalism.