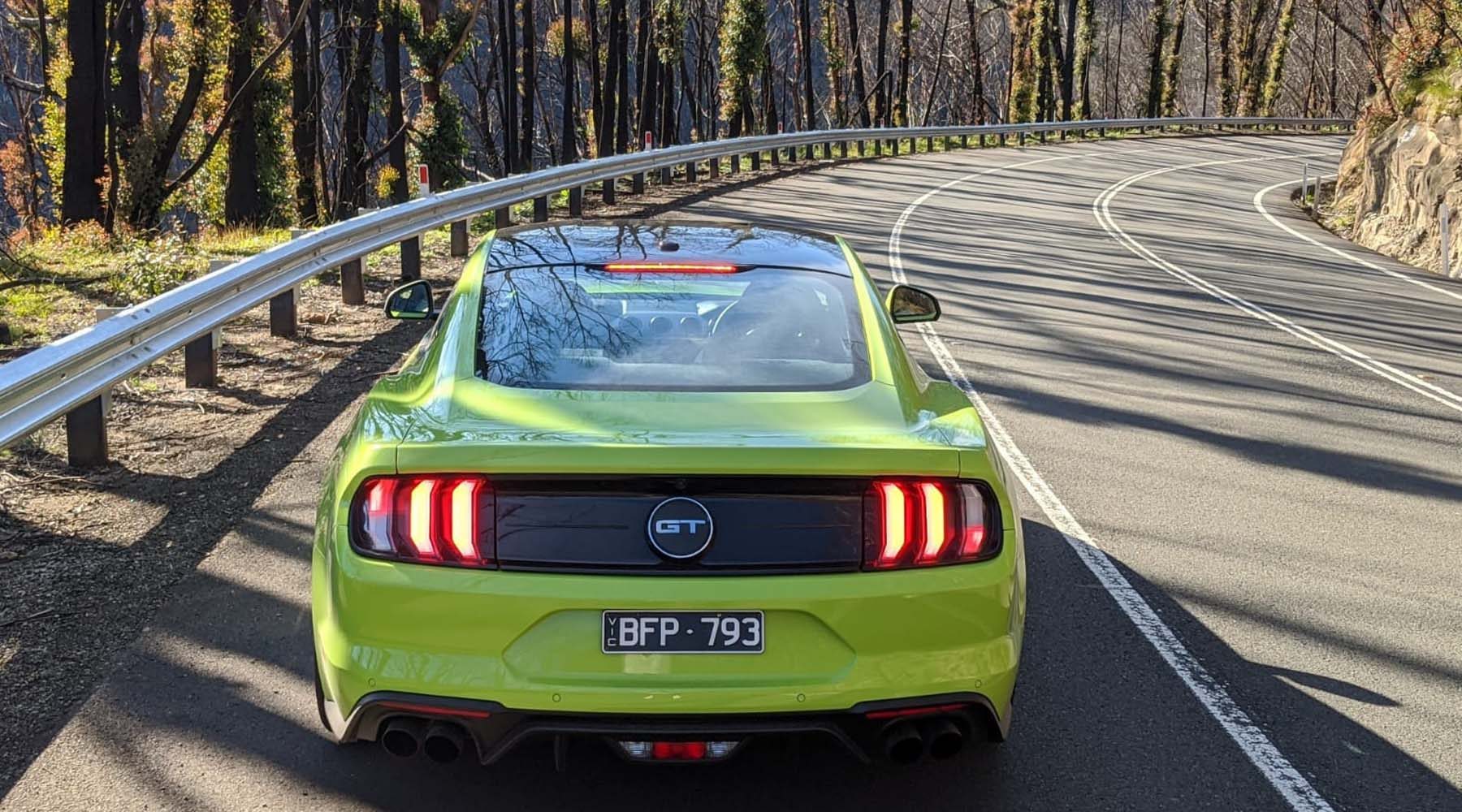 For 2020, Ford built on the 2018 facelift, mustering up a range of new colours that only add to the appeal of this iconic vehicle.

Along with the stunning Grabber Lime that we had on our tester, the company offers up Twister Orange, Iconic Silver and Red Hot.

There is also a new Black Shadow Pack costing an extra $1,000 that you most definitely should purchase if you are opting for one of these new colours. Just take a look at the photos below – the Mustang GT we drove looked superb.

Priced at $64,190 before options (ours crept up to $71,590), the Mustang still offers good value for money, but does it still retain all of its endearing trademarks and charm?

Not a lot has changed since the vehicle was updated in 2018.

As always with a Mustang, it’s designed to give you a sense of nostalgia, as though you’ve climbed into a best-hits album of the car, spanning its 56 year history. When you see that unmistakable galloping wild horse badging, it really does fill you with the sense that you are sitting in a true muscle car with tons of heritage.

Behind the steering wheel is Ford's easy to use 12-inch digital display, with all the important features unlocked by a special “Mustang” button on the three-spoke wheel.

There are a lot of fun, track-only features freed by that control, like the ability to record lap times and quarter mile sprints.

There is also Ford's SYNC®3 system, which is operated through an 8-inch touchscreen. As with the other Fords we’ve reviewed with this set-up, like the Focus ST, it's straightforward to use with little room for confusion. It comes pre-loaded with Apple CarPlay and Android Auto, too.

Wired into the infotainment circuitry is a 12-speaker Bang & Olufsen sound system, replacing the Shaker system that was fitted to previous Mustangs. If you are anything like me, you will find yourself not listening to it too often, instead opting to tune in to the unmissable “Growling V8 Tailpipe FM” as it were. On the rare occasion we did have some jams on, the sounds produced were crisp, clear and underlined by a full complement of bass.

Underneath the screen, Ford’s switchgear hasn’t changed from the previous model and it also retains the brushed aluminium-look plastics. Visually, it does the job, adding to the nostalgia and feeling of driving a Mustang, but I can’t help but think it is starting to age and it comes across as a little cheap. Proper aluminium buttons would be more suitable.

There are still the same right-hand drive adaptation issues, too. The cup holders stop you getting to the shifter if you have bottles stored in them. Even the handbrake is on the other side of the centre console.

One of the options on our 2020 Mustang GT was the Recaro leather seats which offered plenty of support and cushioning for longer drives. Being electronically adjustable, they are a breeze to live with.

With little-to-no leg room in the back and, quite frankly, no way to gracefully get in there anyway, the rear seats are realistically only going to have passengers sitting there in the most desperate of times.

With that said, it does add a lot of extra storage space within the cabin. We’ll call this a win for interior storage, of which the Mustang does have a good amount, between the centre console bin and door pockets.

There are two ISOfix points on the outboard rear seats, but I can imagine it might be a headache installing them. I've never witnessed a baby seat in the back of a Mustang with my own two eyes though.

You can store 408 litres under the boot lid, the same amount of space as the four-door Kia Stinger GT, which is not bad at all.

Still, the configuration makes it a bit difficult to fit wider items, requiring you to lift them up high and into the boot as opposed to simply sliding them in from waist height.

Fire up the stonking big V8 and a smile spreads across your face immediately. Even setting the exhaust to “Quiet” isn’t all that hushed. But we doubt too many people will be doing that anyway.

At speed, the 2020 Mustang rides quite well, no doubt thanks to the $2,750 MagneRide suspension package that was fitted to our press car. The MagneRide dampers are capable of analysing parameters from the road and respond by adjusting themselves up to 1,000 times per second.

Around town though, you do tend to experience the road surfaces a bit more, but that is to be expected when purchasing a car like this. In fact, it is because of this set-up that the vehicle can perform and corner as it does, so that’s not a criticism at all.

You are able to control the ride with various vehicle set-ups too. There is “Normal” for everyday driving, “Sport” for sporty days, “Race” for track days and “Drag Strip” for drag strip events. Each mode tailors the suspension set-up as well as steering and throttle responsiveness.

We need to circle back to the V8 though, which really is the party piece of the Mustang. We love this engine so much.

Number one, it is fantastic that it still exists and hasn’t been disposed of for something smaller and more economical. Without any forced induction, the naturally breathing engine can focus on making power that is easily within the limits of the factory rubber.

Number two, because it is a good little workhorse. You don't really need to be gentle with it around town as it is compliant and responsive down low, and then when you do stomp your foot on the go pedal it dutifully raises the revs and breaks into a raucous song.

It is at this point that you need to watch yourself. Make certain you don’t get carried away in the various restricted speed zones and that you keep that rear end in check. In Normal mode this isn’t such an issue with the various computers keeping you on the straight and narrow, but when you play around with the setting and switches, well, you’ll have to be careful.

In terms of numbers, the Coyote V8 still produces 339kW and 556Nm of torque, which is capable of launching you to 100km/h in 4.5 seconds, shifting through its automatic 10-speed gearbox, which in Drag Strip mode loses no torque between shifts.

From a rolling start the Mustang can get up and going in no time, as the automatic gearbox has the ability to downshift directly from 10th gear to 3rd, and streak past the truck driver in the left hand lane.

Safety has always been a weak point of the Mustang. Unfortunately, I can’t report an increase in safety rating as it still only lands a 3-star ANCAP rating, but there is a good suite of safety technology loaded up in the car.

As standard you get:

When you consider the direct competitors for the Mustang in Australia, all of which are produced by luxury brands and cost closer to the $100,000 price point, the Mustang offers a good amount of value for money.

Sure, you could opt for a four-door, six-cylinder Kia Stinger, which is a great car in itself, but this V8 is worth considering if practicality isn’t an overriding concern.

A Mustang has always been a heart over head purchase, only now, your head can rest assured that the muscle car isn’t such an outlandish purchase.