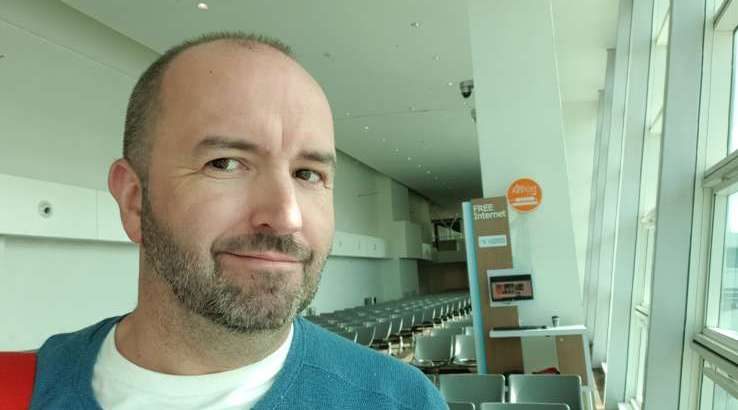 Can any human body cope with that much Air Asia X?

Last February, Air Asia X announced plans to launch the first international flights from Avalon, Melbourne's "other" airport. Those flights to Kuala Lumpur eventually went on sale for the ridiculously low base price of $99, of which just $12 actually went to the airline.

As an inveterate cheapskate and addicted frequent flyer, I had to try this for myself. Avalon has enjoyed a strange hold on me ever since my first visit, when I was astonished to see rabbits bounding in the nearby fields. It's only marginally busier now. Plus I've not flown Air Asia X before. 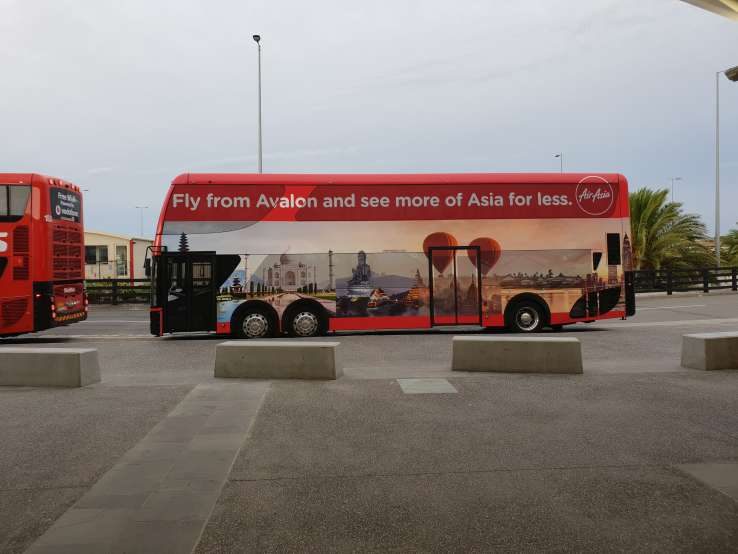 Rather than risk first-day screw-ups when the service launched in December 2018, I booked a seat for January. My packed schedule meant I didn't actually have time to do anything other than fly to Kuala Lumpur, and then fly back a few hours later. But I did it anyway, just because.

I did splurge on seat selection and opted for a window, because no-one is clambering over me to go to the toilet, thanks. And I paid up to sample a meal on my return flight, figuring I might as well compare and contrast with full-service carriers. But I didn't need any extra luggage allowance. 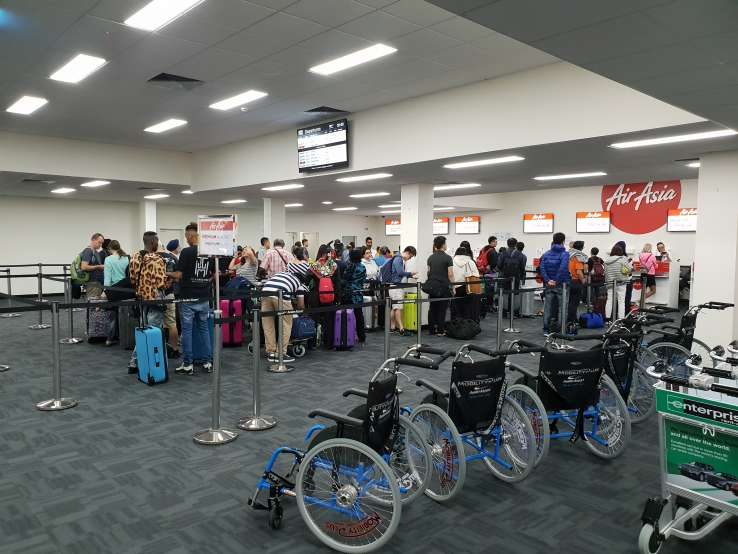 The new international check-in desk at Avalon is still part of the main terminal. It wasn't madly busy when I arrived, but there were people queuing with baggage. Because I had no bags to check and had already printed my boarding pass for flight D7 217, I was able to skip the queue and just have my documents confirmed at the service desk. 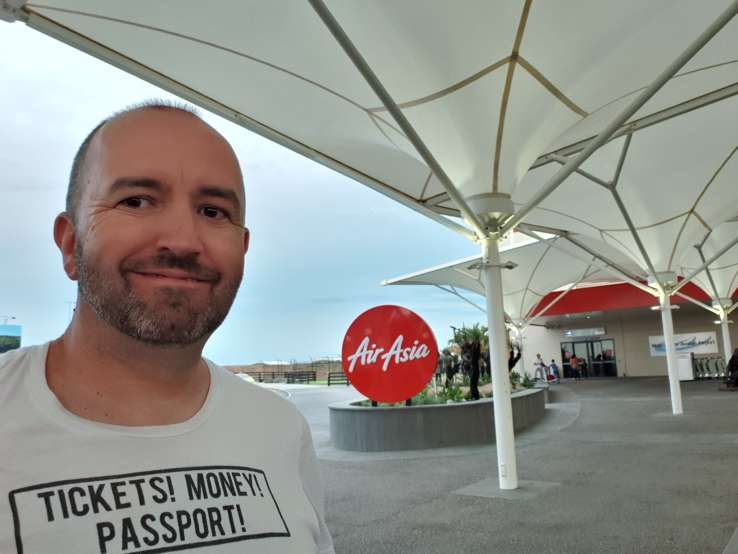 International departures are in a separate hangar, with a cheerful staff member at the door to remind you not to bring in large bottles of water. Security scanning and immigration were a breeze. 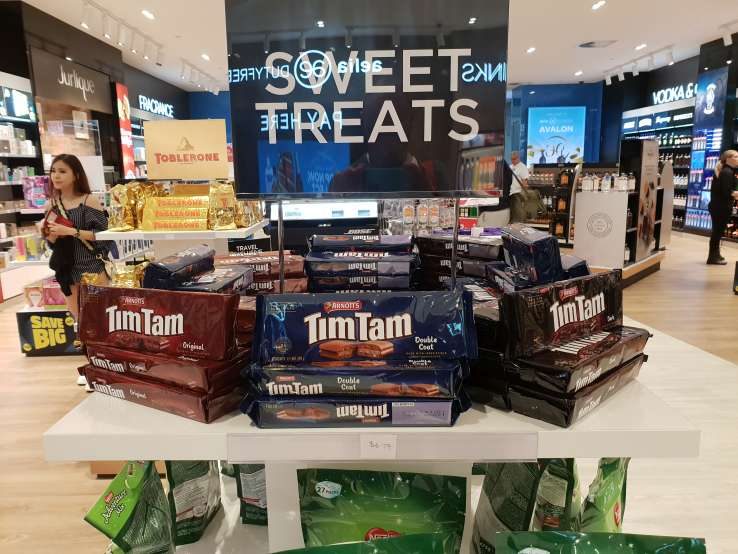 Inevitably, there's a duty-free shop, and inevitably, it's charging too much for Tim Tams. There's also a single cafe/bistro if you want to grab a bite. 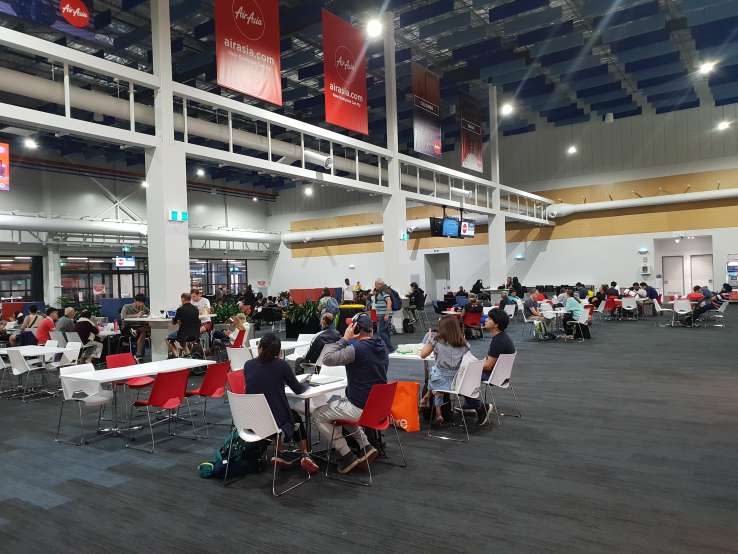 Avalon doesn't run any frequent flyer lounges, but with just one service running, there's plenty of space. There are benches with power outlets galore if you need to charge your phone, and larger lounge seats which were proving popular amongst the assembled throng. 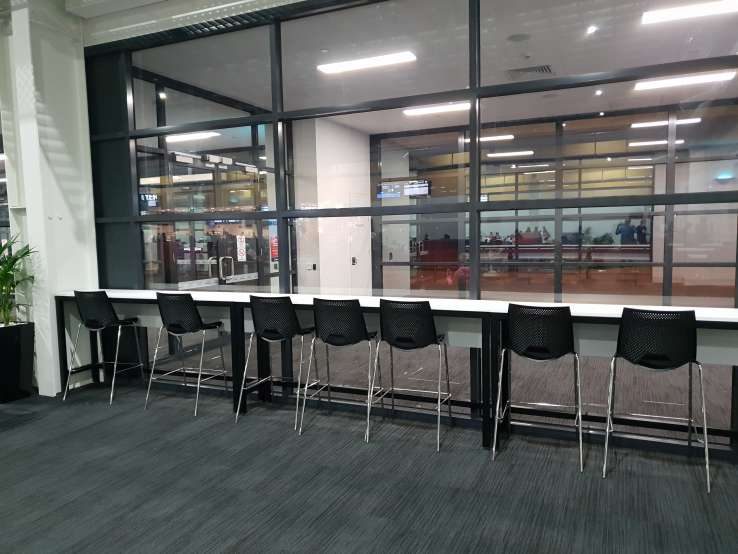 One handy bonus of all that space is that the queues for the different boarding zones can be easily spread out, rather than everyone merging into each other in the usual way. That makes boarding quick and efficient, though there's always something weird about boarding an international flight by walking across a tarmac rather than down an airbridge. 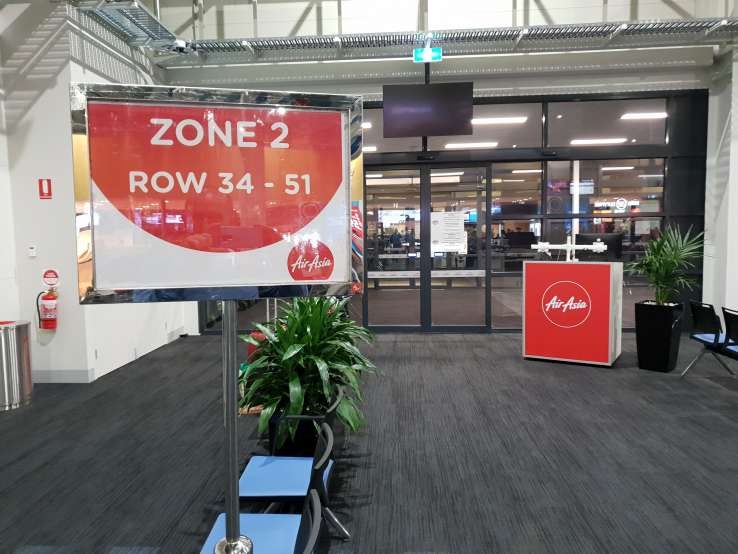 And so to the plane itself (an Airbus A330, planespotters). Many online reviews suggest that Air Asia X seats are so cramped it's like turning yourself into a jack-in-the-box for the duration. I must say I didn't find it so. There's a little more leg room than you'd get on a Tigerair or Jetstar domestic service, which was what I'd anticipated. There's no seatback screen and no power outlet, but on a $99 ticket I'm not going to complain. 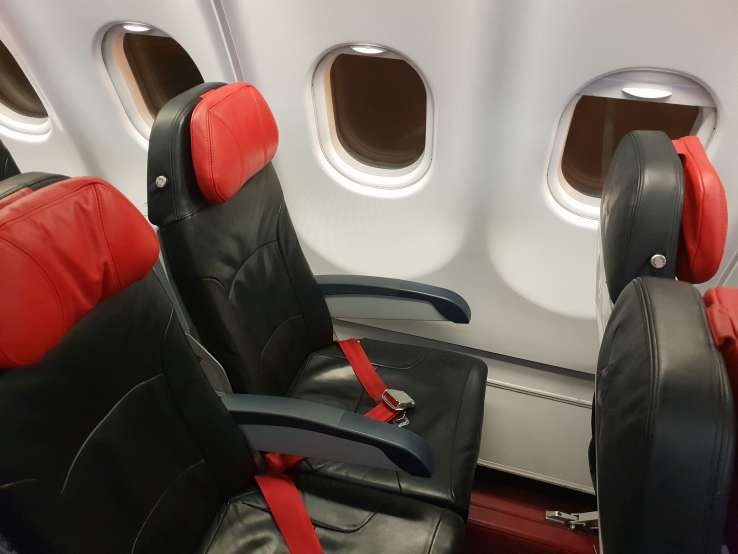 Unsurprisingly, the need to maximise fares means there's even advertising on the seatback tray. I can't see any spare seats, so I guess the cheap fares are working. 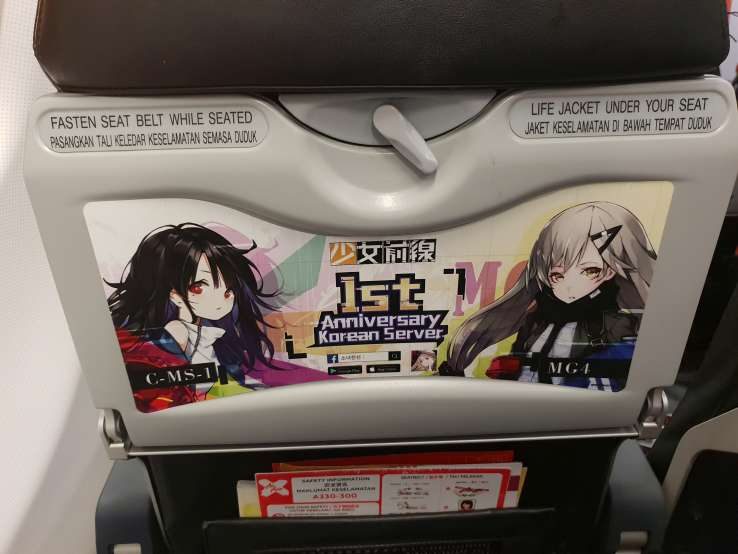 The biggest annoyance is that Air Asia X bans the use of any electronic devices during take-off and landing. That means no taking photos of our ascent, no playing games on my phone, and no reading books on my Kindle.

As we're departing at 10:45pm at night, once we reach peak altitude I recline my seat, pull out my inflatable neck pillow and grab a few hours. I don't wake up until we're getting ready to descend.

Kuala Lumpur's budget terminal is sprawling but efficient, and one advantage of a 4am landing is that the crowds aren't too large. After clearing customs, I head straight to my planned destination: a handy Priority Pass lounge which is landside, meaning I can have a shower and breakfast. (Look out for a full review of that lounge in the near future.) 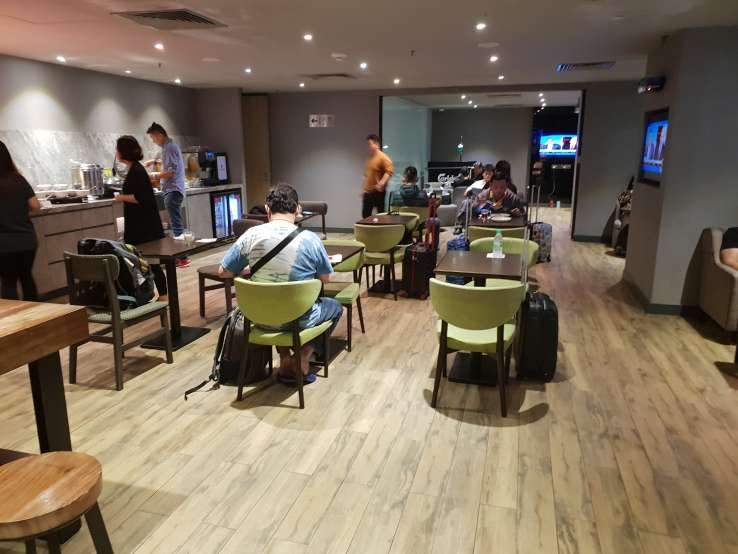 After whiling away a few hours in the lounge and exploring the airport surrounds, I head back to the gate for my return flight, which is departing at 10:35am. The gate lounge isn't quite as spacious as Avalon, but there's still no battle for seating, and at least you can see the plane. 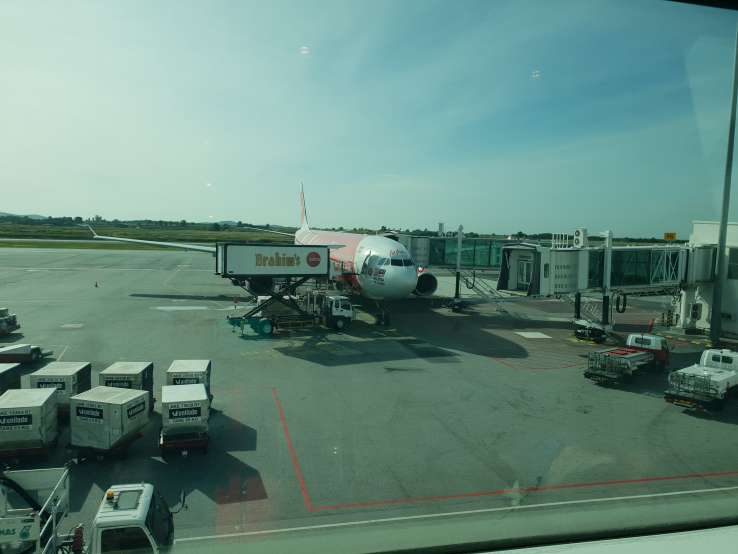 On the return leg, I get to sample the Air Asia X chicken lasagne. This is pretty much what you'd expect from an airline lasagne; the extra vegetables are a nice touch. It's certainly the equal of any other economy class meal I've had in recent years.

My biggest complaint about the lasagne is that we were nearly four hours into the flight before it was served. I pass the rest of the time reading on my Kindle, until I'm once again forced to put it away for our return descent. 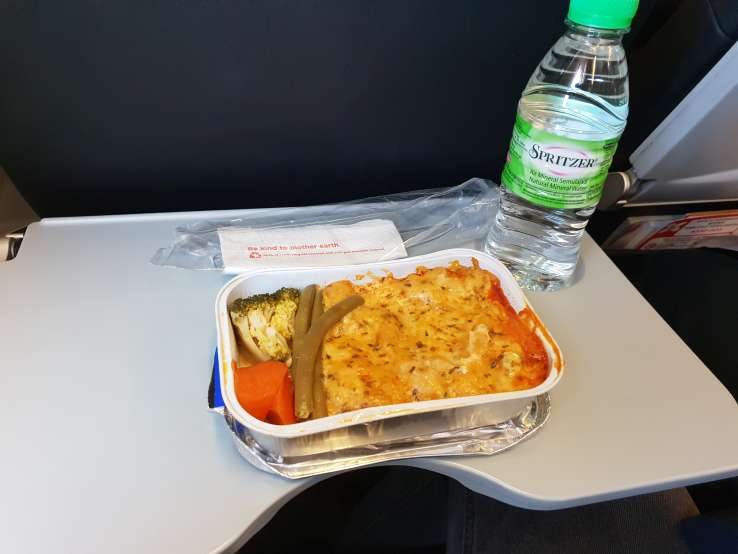 Landing at Avalon, I'm surprised that there are no SmartGates to handle passports, since they did feature on the outward leg. Instead, everyone has to queue and be checked by an actual person. Fortunately, this doesn't take more than 10 minutes.

So the verdict? I'd happily take that flight if I needed to get to Kuala Lumpur, and at prices this low even the cost of having to get to Avalon could be justified. Maybe next time I'll even stick around for more than six hours. Just because.