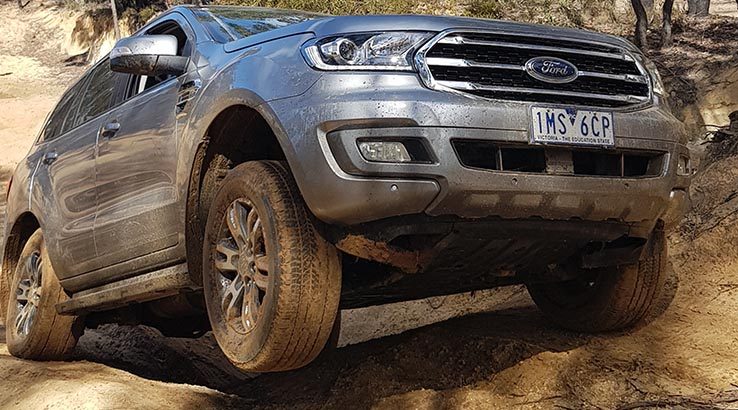 An engine stolen from a Raptor, improved handling and a range of new tech: Ford has launched its updated Everest line-up. We put it through its paces to see how it goes on-road and off.

Sales growth has been steady with the Ford Everest as the motoring giant looks to claim a bigger stake in the SUV market. We headed out to the Lost City in Lithgow, getting behind the wheel of both the 2.0 Litre Bi-Turbo and 3.2 Litre Trend variants to see if the latest iteration of the SUV is the complete package.

The 2019 model has received a minor face lift, with an updated front grille, bumper and fascia design featuring new HID auto levelling headlamps and LED daytime running lights. The updates are subtle on first look, but it’s still an SUV that doesn’t look out of place travelling around the city.

The engines: Tale of the tape

On paper, the new Bi-Turbo engine wins in every category, so why offer the 3.2? While Ford is confident that consumers are going to like the new Bi-Turbo engine, it has chalked this decision up to giving consumers greater choice. “Some customers value the number of cylinders, some customers value fuel efficiency and the decision around having both and giving customers that choice just recognises that diversity in our customer base,” said Dan Ciccocioppo, Ford Australia program manager.

Interestingly, the turbo housing itself is made of a high-grade alloy, giving it durability up to 850°C and comes straight out of aerospace industry, where this technology is used on rockets!

Whichever engine you choose, though, will be capable of towing anything you put behind it with a towing capacity of 3,000kg+ for both.

The first leg of our trip saw us behind the wheel of the new 2.0 Litre Bi-Turbo Trend, which I was looking forward to testing. On paper it’s a superior engine. The heart from the Raptor provided progressive acceleration through its new 10-speed gearbox and it didn’t disappoint. Despite trying to trick it on several occasions, it seemed to select the right gear each time and continued on its way.

Switching to the 3.2 Litre, 5-cylinder Duratorq engine, you notice that it pulls a bit harder off the mark with the 6-speed automatic.

You can change gears manually using a button on the side of the gear shifter. I got a chance to use this when engine braking downhill behind a bus. Personally, I’m not a fan of this implementation.

Providing a comfortable ride for the entirety of the trip, the engineering team has made a number of changes in order to enhance its feel and make it more plush than the previous model. One of the main contributors to this is the relocation of the stability bar from the front of the car to the rear, which has allowed the team to use lower spring rates.

One of the more obvious details to me was the cabin noise, or lack thereof. The team at Ford has done a good job of reducing cabin noise with the Active Noise Cancelling technology (ANC) and the addition of an acoustic windscreen. The result? You don’t feel like you’re sitting in the cabin of an 18-wheeler and are able to hold a conversation in a quiet and pleasant environment.

Speaking of the cabin, there is plenty of room and storage space. The Trend model we drove had its interior touch points updated and improved but a lot of plastic has still been retained. All models are fitted with Sync 3, Apple CarPlay and Android Auto that is accessed via a 8.0 inch display. But all things considered, the Everest's interior feels very practical.

Along with the acoustic windscreen there is a slew of new technology. The addition of Pre-Collision Assist with Pedestrian Detection and Traffic Sign Recognition (fortunately we only tested the latter) among others means the new Trend is safer than its predecessor, while the Lane Keeping System gently nudges you should you be getting to the edge of your lane.

For a vehicle of its size, the Everest really is an easy car to drive. With light steering, the car is a breeze to maneuver. Honestly, at first I wasn’t a fan of this and would have preferred heavier steering, but the longer I drove, the more I appreciated it and can definitely see the appeal for customers utilising the SUV for city driving.

Departing for the Lost City from the Zig Zag railway, the Everest cruised along the dirt trail in relative comfort (and quiet). A couple of kilometres along, though, we got our first chance (of many) to test out how serious the SUV was as an off-roader. It was then that my lack of 4WD experience was front of mind.

Switching on the Hill Descent Control and creeping over the crest of our first decline, the Everest handled it with ease. Automatically adjusting and braking, it took us to the bottom in controlled fashion.

Even with road tyres on the car, the Everest handled everything that we threw at it. I was surprised by how easy it made the whole experience for someone with very little off-roading experience. Ford’s Terrain Management System was at the ready, but there really wasn’t any need to go switching modes or turning dials.

Of course, we did anyway when the opportunity arose to test sand mode. Sand mode adjusts a range of different factors including throttle sensitivity, gear shifts, stability and traction control in order to allow for more wheel spin on loose surfaces. And wheel spin we did (in a completely controlled manner that didn’t at all put a smile on my face). Again, the SUV made its way through the water, launched on to the sand and maintained motion before coming out the other side (maybe after a bit of circle work) easily.

The track out to the Lost City provided plenty of obstacles that I’m sure would stress a novice, but in the Everest, there really was no need to be worried.

The Ford Everest is a capable city vehicle which will also have appeal as an off-roader. Easy to drive, a comfortable ride and with a range of new technology and safety features. The addition of the 2.0 Litre Bi-Turbo engine gives you greater choice.

As an off-roader, it is equally capable.

The Everest is also covered by Ford’s unlimited kilometre, five-year warranty along with capped-price servicing and complimentary map updates for seven years when a scheduled service is completed at participating dealers.

Even with its increased price tag (an increase of $1,200 across most models), if you are in the market for an SUV, the Everest is worth considering.

Disclosure: Alex Jeffs travelled to The Blue Mountains as a guest of Ford.

Compare some options to finance a 2019 Ford Everest