2018 was the year of the crypto dapp, for whatever that’s worth

The sheer number of dapps skyrocketed in 2018, but user numbers less so.

Price predictions for cryptocurrency at the start of 2018 tended towards the ebullient. Predictions of adoption and technological developments were similar, with a number of people at the start of the year anticipating the year of the dapp. It was the dividing line that would see platforms like Ethereum start achieving the promises of real-world application through its decentralised applications.

A lot of hot Ethereum dapps hit mainnet in 2018. Augur came to life in July to bring a decentralised predictions marketplace and a host of sticky ethical questions to Ethereum. It was followed shortly afterwards by Golem (GNT), one of the first Ethereum ICOs, which created a decentralised marketplace for computing power – starting with rendering power.

A sizable host of decentralised exchanges also sprung up, hoping to usher in the next generation of cryptocurrency trading in a safer way.

By the end of the year, the numbers were in.

Between Ethereum, EOS, Tron and STEEM – the top four contributors to the dapp marketplace – the dapp market transacted US$6.7 billion in crypto. In dollar terms, this outdid the first year of Apple's App Store, which only earned $4.2 billion in revenue in the financial year ending 2009, according to Gartner.

But here's what Apple's App Store did over the next 10 years, according to Business Insider. 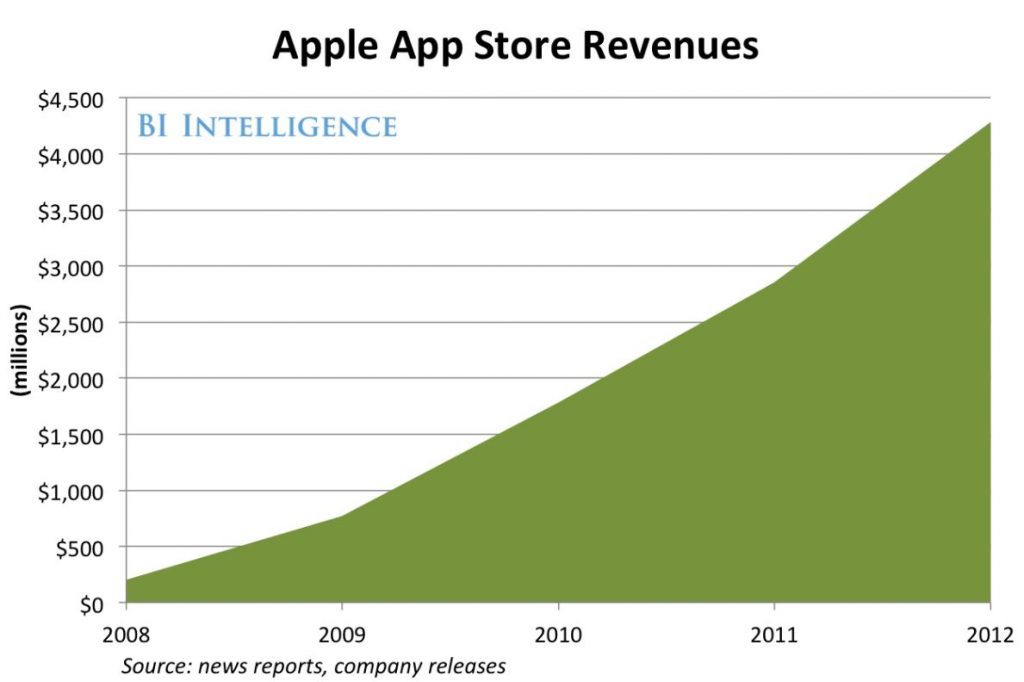 Yeah, it doesn't match the numbers cited by Gartner, but whatever. The direction of the green line is what we're looking at here.

And by 2018, Apple's App Store gross revenues were over $45 billion for the year. It was nothing but explosive growth from then until now. By contrast, dapp uptake is struggling disproportionately.

Only 10% of Ethereum dapps are used on any given day, according to LongHash. And among those which do see use, most of the numbers don't inspire much confidence.

Among the top 100 most-used dapps, two-thirds have fewer than 10,000 transactions within a 24-hour period. A small handful of 13% saw more than 100,000 transactions, with the remainder falling somewhere in between.

It's worth noting, however, that the number of dapps has absolutely exploded throughout 2018.

The rapidly growing number of dapps, most of which are – let's be honest – get rich quick schemes, is diluting active user percentages.

A better question might be whether the total number of dapp users is increasing as it should. And the answer is a resounding "kind of".

One decent way of measuring the actual number of Ethereum dapp users is with MetaMask downloads, as it's by far the easiest and most-preferred dapp gateway. It's also designed for real user-friendliness, which means its download figures are more likely to represent real end users rather than tinkerers.

The numbers are lacklustre though. We know MetaMask hit 1 million downloads in February 2018, and that it topped 1.3 million in November. In the same time, the number of Ethereum dapps more than doubled.

This explains the exceptionally scrappy usage numbers, but it still doesn't paint a parabolic growth picture. It's quite a plateau-ey looking figure for "the year of the dapps".

With price action settling down, it looks like dapps need to start competing on their own merits relative to centralised equivalents.

The reason this is such good news is because gambling is a very practical use case for cryptocurrency and blockchain. The popularity of gambling dapps makes it clear that people are willing to use dapps when they can deliver benefits which centralised apps can't.

It suggests that despite the relatively flat uptake figures to date, as scaling solutions roll back remaining obstacles, as the user experience improves and as dapps get more sophisticated, they will be able to find a growing user base.