Carma
Carma is an online used car retailer that has experts test-drive and inspect all vehicles. You can also take virtual tour of each car.
Eligibility criteria, terms and conditions apply.
Ben Gribbin
Fact checked 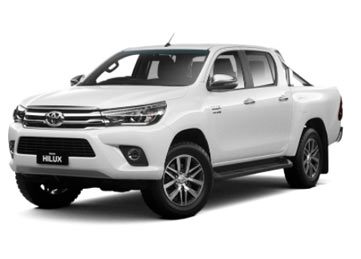 Avg. critics score: 76.66%
3 critics
How did we calculate this? We analysed and aggregated the scores of Cars Guide, WhichCar and Motoring to bring you the finder.com.au score. This is a comprehensive score that brings together the four different expert ratings you see below.
Finder.com.au is personal finance comparison site that provides you with the tools you need to make better decisions. Learn
how we work and how we make money.

How does the Toyota HiLux compare with its peers?

When buying a HiLux, you're paying in part for its reputation. Driveaway prices start at $26,400 for the rear-wheel drive, 2.7L petrol, baseline WorkMate single cab chassis model. The top of the range SR5 4x4 dual cab ute with a 2.8-litre diesel automatic costs $61,441.

The HiLux is not only Australia's best-selling ute, it's the best-selling vehicle overall. Toyota has a rock-solid reputation for building an unbreakable, capable 4x4 that'll work hard for its keep.

With that said, this isn't the best ute currently on the market. For that bragging right, you should look towards the Volkswagen Amarok or Ford Ranger.

Reviewers generally agreed the HiLux falls down slightly with its lower power outputs and less fuel-efficient engine fitments, as well as a relatively high-price. You are definitely paying a premium for the HiLux name.

Toyota sells the HiLux with three engine options. For bog standard, rear-wheel drive WorkMate utes, Toyota offers a 2.7-litre petrol, with 245Nm of torque and a decent 122kW at 5,200 rpm. The petrol engine appears to be underpowered by modern standards but it's cheaper than the lowest-priced diesel HiLux.

Moving up the range, Toyota has developed two oiler options. The first has a displacement of 2.4 litres, providing 400Nm when mated to the auto box and 110kW. This engine is the most fuel-efficient of the range. The HiLux is available with a more pokey 2.8-litre diesel, which produces 450Nm of torque and a reasonable, if not groundbreaking,130kW.

The 2.8-litre diesel is also fitted to the Toyota Fortuner and also the Prado. Reviewers found it to be an excellent engine, though it doesn't offer as much power or torque as other power plants in its class.

The HiLux is available with three gearboxes too. There's a five-gear manual for the lower-end WorkMate models. There's also the option to fit a six-speed manual, as well as a six-speed auto.

Journalists noted how smooth the automatic swapped cogs, almost seamlessly. The auto box mated with the diesels also increases the maximum torque available, though you'll burn through more fuel. Frustratingly, opting for the 2.8 diesel automatic which should tow like a train, actually lowers the maximum towing capacity to 3,200kg.

Surprisingly, the HiLux isn't the most fuel-efficient ute. The petrol engine uses a whopping 11.1L/100km combined. The smaller of the two diesels, at 2.4L displacement, uses around 7.7L/100km and the larger 2.8 diesel glugs through 8.1L/100km.

Take these numbers with a pinch of salt. Real-world economy figures are almost always worse. The automatic gearbox further increases fuel consumption, as do any loads or roof bars and different body style combinations. Compared with other utes in its class, the HiLux is actually one of the least fuel-efficient.

For a ute with leaf springs, journalists said the HiLux rides pretty well. The steering is progressive, not sluggish and imprecise like other utes. Reviewers commented that the ride is firm and solid, feeling secure around corners and on wet roads. However, the firm ride is translated through the seats and into the passengers, which becomes tiring on long drives.

Adding weight into the back helps to settle the leaf springs and the HiLux doesn't suffer from a bonnet up in the air stance as with the Navara, for example.

The HiLux doesn't really come unstuck in any key areas, doing everything you'd want from a ute and a little more.

The HiLux is excellent off-road. It has bags of grip, ground clearance and higher-end models have locking diffs plus high/low range 4WD. Toyota also clad the 4WD models with modest underbody protection.

With a maximum wading depth of 700mm and 279mm of ground clearance, it makes water obstacles and rock crawling a breeze. Fortunately, the firm paved-road ride translates into a supple and smooth ride off-road.

With several body styles available, there's a HiLux that will suit most drivers. Tradies will love the load-hauling ute double cab, whilst farmers will benefit from the tray-back single cabs.

Trim levels are: WorkMate, the base spec for workhorse utes; the SR which is slightly upgraded and offers long-distance driving comfort; then finally the top of the range SR5 trim. SR5 has all the mod cons.

Much like its rivals, every trim level comes with Bluetooth phone connectivity, voice recognition, cruise control, a touchscreen and steering wheel controls. Unlike its rivals, the HiLux has a reversing camera as standard. There's a tilt-and-reach adjustable steering column too, which many other utes fail to include, or at least do so only partially.

There are plenty of airbags – seven in fact – protecting all occupants, including those seated in the rear of the double cabs. Electronic Stability Control comes as standard, in addition to a neat Trailer Sway Control feature which prevents drivers towing trailers from getting a swapper on. The HilLux also has a reasonable Electronic Traction Control, though some reviewers found it got in the way on off-road hill climbs.

The interior is well-made, using tough, rugged plastics. One reviewer felt it was as solid as oak. Front passengers have plenty of room, though the rear of the double cab is a bit more snug. On the SR5 model, passengers in the back receive cool air via rear vents.

Toyota has also done an excellent job of reducing cabin noise. Even at high speed, you can hold a conversation with the people behind you which certainly goes a long way to making long journeys less tiring and more enjoyable.

The HiLux has a wide-reaching reputation that precedes it. Unfortunately, it doesn't quite live up to the hype. Toyota needs to revisit the HiLux to offer more active driving assists, higher engine power outputs and better fuel economy.

It's frustrating that the 4WD system only works off-road and there's a definite premium added to final prices because the HiLux is in such high demand.

Is the demand warranted? It's a good ute, but it's not the best.

By taking just a few moments to compare car loans below, you could save hundreds of dollars on a new Toyota HiLux.

Don't forget to take a few minutes to compare car insurance for a Toyota HiLux, to save even more!

Compare some options to finance a 2018 Toyota HiLux