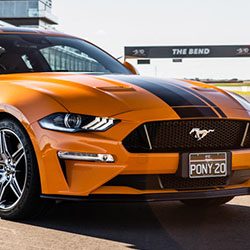 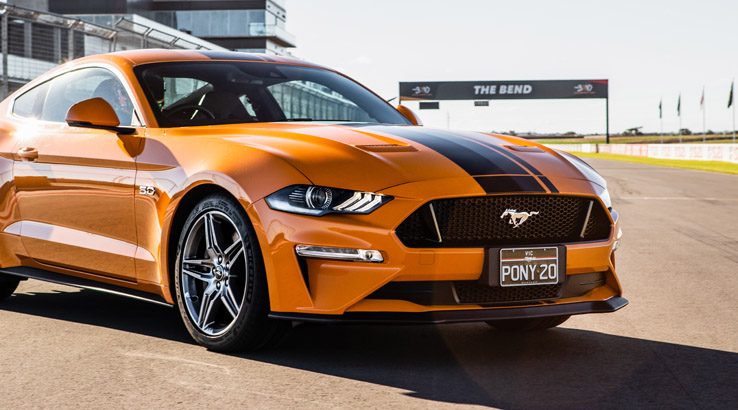 Ford just launched its 2018 range of Mustangs and we got behind the wheel to assess its newest GT Fastback.

The Ford Mustang has been a commercial success since its introduction to the Australian market in 2015. With big muscly V8s seemingly going the way of the dodo bird, the Ford Mustang is still carrying the torch. Growing up and admiring the Mustangs of old, I headed out to Adelaide for a test drive of the new 2018 Mustang with high hopes.

As with previous models, the 2018 Mustang can be powered by either Ford's EcoBoost 4-cylinder engine or its Coyote 5 litre v8. Prices range from $49,990 for the EcoBoost to $74,709 before on-road costs and options are added on the GT. I tried out the GT Fastback in both manual and automatic.

Design cues were taken from nature, with the headlights being created to reflect an eagle’s eyebrow. The shift to all-LED lighting has opened up space on the front of the car for more design elements.

According to Ford, all these elements were added to give the car more stance and a more “aggressive” look. Seeing the car in person, I reckon it has hit the mark.

I’ll admit, I initially preferred the previous model’s front, but it grew on me during the drive, especially the lighting and headlight design. The design also caused some sore necks in the city of Adelaide during the test drive as everyone spun around to take a look at the throaty V8 coming down the road.

Peeling out from our starting point, the Mustang felt comfortable and solid. The weight of the steering wheel means that driving the Mustang feels like a real experience, not the video-game-like feel that's characteristic of some electronic steering systems these days.

The new 10-speed gearbox promises a fuel economy of 12.7L/100km, though I wasn't on the road long enough to see if this perhaps-optimistic prediction would hold. Getting fast access to the 5.0 Litre V8s power isn’t an issue. With the ability to shift directly from 10th gear to 3rd, you can overtake anything on the road quickly as you are pinned to the comfortable, contouring Recaro seats (a $3,000 optional extra I would totally go for).

The Mustang handled a mixture of city, highway and country roads well. It was surprisingly easy to manage around the city, and although the ride felt slightly hard, realistically it was quite comfortable for the quality of roads I was driving.

There are four driving modes you can select – quiet, normal, sport and track. The different modes change the car settings and valves to produce a unique noise. In sport and track mode, the sound is incredibly enjoyable to listen to.

Here's a question: What is worse early on a Saturday morning? The neighbour starting their lawn mower, their dog going off like a bull in a china shop or them firing up their V8? While it can’t do much about your neighbours, Ford has attempted to address the last issue. The Mustang includes a programmable “quiet mode” which will automatically be used in the car during a specified time frame (say 5am to 9am).

Ford is going for an improved premium feel with the interior. Any point in which you touch the interior of the car has been reviewed and improved, from more homogeneous chrome through the car, spun aluminium for the start button and improved stitching throughout. While it's an improvement, for me it still lacks that complete premium feel.

The real talking point is the powerful 5-litre V8, producing 336kW and 556Nm of torque. While you can’t make full use of this on the road, the track is where the car really comes to life.

The first thing I will say is that the new Mustang is incredibly forgiving, gripping and sticking through corners and allowing you to get back on the power quickly when in reality you should be 50 metres to the left – in the wall. This gives you confidence that you can use more of the power the car has to offer.

It wasn’t all about the new 10-speed auto though. At Tailem Bend, we got our hands on the reworked 6-speed manual, boasting a dual-mass ﬂywheel with a twin-disc clutch. Easy and fun to drive, the new model did not create the leg workout you would expect. Instead, it produced smooth, effortless shifts, courtesy of a deliberate 15% pedal effort reduction by Ford engineers.

Drag-strip mode is Ford's version of launch control. It's also one of the reasons that the latest Mustang GT is its fastest ever, offering maximum acceleration, faster shifts and peak engine torque all the way through the acceleration phase.

This is a feature I have been itching to try. It's incredibly fun, but absolutely crazy.

Putting the car in to drag strip mode is a decision you want to think through carefully. Lining the car up on the straight at Tailem Bend race track, building up the revs and removing my foot from the brake, we were thrust forward in a linear fashion. The new 10-speed gearbox shifted instantly without losing any torque, pinning me in to the seat and making me acutely aware that I couldn't blink. If I did, everything that was down the other end of the straight would be in your face when you opened your eyes again.

It may not have the complete premium finish that Ford was aiming for and it may not fit anyone over 5 foot tall in the rear seats, but the new Mustang GT made a good impression. Most of the motoring journalists at the test drive launch agreed it was an impressive improvement on its predecessor.

While it did receive a price bump, this is still a lot of car for the money you pay. The Mustang GT is a car that will worry BMW M3s and Porsche 911s at a price point that is significantly less than most European rivals.

After an incredible day with the Mustang, I couldn’t stop smiling. The Mustang really is an experience. The way the engineers have gone about improving this car makes me confident that V8 cars will still be around for a while.

Disclosure: Alex Jeffs travelled to Adelaide as a guest of Ford.