OnlineAuto.com.au
With its "bulk buying power", OnlineAuto.com.au can help you buy the car you want and potentially save you money too.
Eligibility criteria, terms and conditions apply.
Alex Jeffs
Fact checked 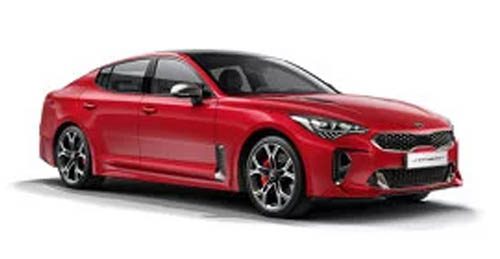 Avg. critics score: 82.67%
3 critics
How did we calculate this? We analysed and aggregated the scores of Car Advice, WhichCar and Motoring to bring you the finder.com.au score. This is a comprehensive score that brings together the four different expert ratings you see below.
Finder.com.au is personal finance comparison site that provides you with the tools you need to make better decisions. Learn
how we work and how we make money.

How does the Kia Stinger compare with its peers?

There was a lot of hype around the Kia Stinger. The Korean sports car, released in late 2017, was being touted to take the place of the no-longer-produced Australian-made V8s. And while sales for the Kia Stinger haven’t been as strong as expected, reviewers have found it to be more or less the perfect car for its price point.

If you’re after an impressive performance sedan at a price point much lower than its European competitors, The Kia Stinger is a car you might want to consider.

The Kia stinger is offered with two different engines across its six variants. There is the 4-cylinder turbocharged engine producing 182kW, and the powerful twin-turbo V6 producing 272kW.

Reviewers found that both engines provided smooth and linear power when accelerating, with smooth gear changes coming through the dual-clutch transmission. However, they also found that the shifts weren’t as smooth when using the paddle shifters.

Obviously fond of the twin-turbo V6, reviewers noted that the engine’s power was sufficient enough that you would need to watch the rear wheels when accelerating sharply as it had a tendency to spin the back wheels.

If you are looking for a sports sedan with an aggressive exhaust note, you may be left disappointed. Reviewers noted that the Stinger’s sound is unremarkable.

If you’re opting for the twin-turbo 6, while the fuel efficiency isn’t too bad, it is worth noting that it isn’t the most fuel-efficient option out there. Some reviewers said that they used around 8.7L/100km, while some heavy footed counterparts were seeing around 10L/100km.

Perhaps surprisingly – given the stated claims of 8.8/100km from Kia – the 4-cylinder engine recorded numbers closer to 10L/100km on highway runs, with numbers spiking to higher than the claimed 12.7L/100km in Urban areas.

With a fuel tank of just 60 litres, you will be using the bowser pretty often, unless you drive conservatively.

The Kia stinger packs a lot of punch through its turbo-charged engines and it’s got the suspension set-ups to allow you to harness it.

Reviewers were more than satisfied with the ride of the Stinger, complimenting the vehicle’s ride compliance and body control even when travelling over bad surfaces with bumps, gravel and potholes of various sizes.

More than just maintaining traction on these surfaces, the steering was said to be quick and responsive. Reviewers also said that the brakes on the V6 variants performed much better than those on their 4-cylinder siblings.

As far as Kias go, the interior of the Stinger is a step in the direction that the brand is moving. There is a slew of technology and plenty of space, all inside a cabin that has a more premium finish than one would expect from a Kia.

Cabin storage space is well thought out, with storage in all four doors, pockets in the back of the front seats, cup holders front and back, as well as a spot for your phone in the front.

The S versions of the Kia Stinger have a 7-inch infotainment system, while owners of any of the other four variants can interact with the system via an 8-inch screen. All variants come with Kia’s Suna satellite navigation system, with traffic information as well as Apple CarPlay and AndroidAuto.

If you opt for the GT you will benefit from a 15-speaker sound system, a panoramic roof, Quantum Logic Surround and a 360-degree camera among other features.

There was a lot of hype surrounding the Kia Stinger prior to its launch, but the company has done a fantastic job of delivering on expectations.

The Kia Stinger has enough power to keep up with European rivals at a much lower price point and has entered the Australian market at the perfect time. It also comes with Kia's seven-year unlimited kilometre warranty.

If you’re looking for a performance sedan, it’s worth taking a look at the Stinger.

Compare some options to finance a 2018 Kia Stinger