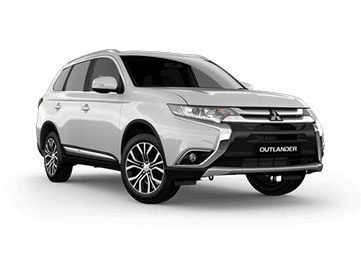 Avg. critics score: 73.75%
3 critics
How did we calculate this? We analysed and aggregated the scores of Cars Guide, WhichCar and Car Showroom to bring you the finder.com.au score. This is a comprehensive score that brings together the three different expert ratings you see below.
Finder.com.au is personal finance comparison site that provides you with the tools you need to make better decisions. Learn
how we work and how we make money.

Get a better deal on a Mitsubishi Outlander

How does the Mitsubishi Outlander compare with its peers?

The 2017 Mitsubishi Outlander is Australia’s first upgrade to the range since 2012, and the new features bring in many of the much-needed functionalities that have emerged since then.

The Outlander might not really shine in any one area, except its capability as a jack-of-all-trades and its exceptionally versatile, and sometimes downright confusing range of options. Here’s an overview:

The Outlander doesn’t break any records and won’t win you any races – but it probably won’t lose you any either.

The engine power isn’t on par with some of the nimbler offerings in the SUV range, but you probably won’t really feel its absence unless you’re carrying a full load, or simply want something for snappier overtaking and a more assertive drive.

The continuously variable transmission (CVT) option is available, and might further detract from manoeuvrability, but carry the corresponding upsides of improved efficiency and a generally smoother drive.

The PHEV will get you a lot more distance, as long as you remember to charge it. According to Mitsubishi, you can expect about 50km of distance on a full charge, or closer to 40km with climate control running.

To further improve it, the Outlander includes an eco mode option that dulls your throttling, but improves fuel efficiency and even critiques your driving. This is what you can expect:

Officially the 2L and 2.4L petrol have both been rated as having a credulity-stretching 1,600kg braked towing capacity, while the diesel has 2,000kg and the PHEV claims 1,500kg.

Several reviewers put the Outlander’s towing capacity through its paces, and generally concluded that the 2.2L diesel can handle the weight with comfort and confidence, but the 2L petrol engine really doesn’t appreciate getting close to the weight limits.

Reviewers have mixed opinions of the Outlander’s handling, and you might find it a mixed bag of pros and cons that improves with familiarity.

Critiques largely focus on the light-weight steering and “mushy” acceleration, and the tendency of the wheels and steering wheel to roll back to straight with a disconcerting lightness.

However, despite the feeling of the drive there were no complaints about the grip on road or off, and reviewers felt most variants responded adequately whenever push came to shove, with the 6-speed automatic transmissions in particular being well able to handle sharp accelerations.

It’s not the zippiest drive, but it well might be one of the nippiest. You might find the lightweight steering to be a good match for the nimble 10.6m turning circle, which lends itself well to city manoeuvres.

This isn’t entirely down to the handling though. Despite fitting 7 seats it’s still one of the smaller SUVs in its class, coming in at only 1.8m wide and 4.7m long.

This utility is further backed up by exceptional visibility in all directions. Take note of the mirrors when you take it for a test drive, as well as the design that affords good visibility in most directions.

This is even further accentuated by a solid camera and sensor suite, especially with the Safety Pack and Exceed models, and a reverse camera that comes as standard on all models.

The LS is somewhat sparse on features, but the Safety Pack trim might soundly live up to its name with a host of value-for-money additions. However, you still get a lot more with the Exceed. The multi-around monitor in particular might become an essential part of your driving experience if you opt for the top-level trim.

The Outlander has a distinctive look on the outside with its oversized grill and prominent 18 inch wheels on even the basic models, in a departure from previous models.

The inside might be more familiar to owners of earlier Outlander models though. Despite the somewhat compact nature of the car, some fairly clever design tricks with each row of seats let it pack almost as much storage space as any other SUV.

Put down the middle and third rows though, and you can pack in a full 1,608 litres of storage.

The interior design hasn’t left any reviewers raving, and some found complaints with the seats, especially in the middle and back rows. Others have commented on an annoyingly reflective centre console, and a bit of seat adjustment trouble for taller drivers.

Your experience with road noise may vary depending on your chosen options and driving style. Generally it’s a satisfying, quiet ride, but the CVT might grate on your nerves at lower speeds, and you might find yourself a little too aware of the diesel engine chugging along.

The touchscreen, now a standard feature with basically all new SUVs, is nothing special. But it’s fitted with a practical range of connectivity options, including bluetooth, Apple and Android connectivity.

Price and value for money

The Outlander’s price range is fairly typical for the SUV spectrum. Depending on your needs it’s probably solid value for money throughout the range.

The LS variants are priced where they should be given the potential limitations, but might be a bit light on the electronics and safety features compared to some similarly priced competitors.

The Safety Pack goes a long way to overcoming that, and the extra cost is quite reasonable given the value it adds.

The Exceed is pushing towards the upper end of the medium SUV price range, but doesn’t run as high as many others and comes with a comprehensive suite of features that might well justify the price. However, you might find the interior to be a little basic for how much you’re paying.

The PHEV is one of very few hybrid offerings, and it comes with the full Exceed kit to help add value. You’re giving up some power and the option for 7 seats, but the potential fuel savings could quite feasibly pay for themselves over time, depending on what kind of driving you tend to do.

Compare some options to finance a Mitsubishi Outlander