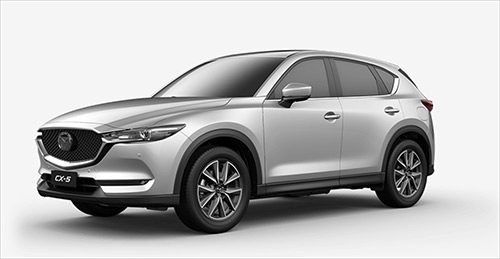 Avg. critics score: 83.25%
4 critics
How did we calculate this? We analysed and aggregated the scores of Cars Guide, Cars Advice, Motoring and WhichCar to bring you the finder.com.au score. This is a comprehensive score that brings together the four different expert ratings you see below.
Finder.com.au is personal finance comparison site that provides you with the tools you need to make better decisions. Learn
how we work and how we make money.

How does the Mazda CX-5 compare with its peers?

Starting at $38,990, the Mazda CX-5 Touring 2.5L petrol model is one variation of Australia’s most popular SUV.
Click on the price below to see monthly repayments across a range of car loan products.

Reviews from around the web

The general consensus is that CX-5 series is popular for a reason, and the Touring hits the sweet spot of price and features. Most reviewers agree that the CX-5’s sheer driveability is one of its main strengths, and strongly favoured the 2.5L petrol and 2.2L diesel AWD engines over any other.

With these specs, it’s only a small price jump from the Maxx Sport to the Touring, which also nets you some cutting-edge features that might push the Touring well ahead of equivalently priced competitors.

If you’re looking for a medium SUV in the $35,000 to $40,000 range that handles well and has a range of features that make it a pleasure to get behind the wheel, the Touring might be worth adding to your shortlist.

The Touring, along with other Next-Gen CX-5s, has stepped up its peak power and maximum torque relative to the previous generation, while weighing in marginally heavier and taking a slight toll on fuel consumption.

It’s got plenty of grunt, but the Touring remains a smooth and leisurely drive, though with comparatively slow acceleration for its power.

Some experts praise its noise-reduction on a variety of surfaces, especially relative to CX-5 predecessors, but others mention that the petrol engine still gets extremely loud under heavy acceleration.

Reviewers tend to agree that the 2.5L petrol or 2.2L diesel engine is the way to go on the CX-5, and that anything less has a tendency to feel a bit breathless and might drop acceleration into the ‘not much fun to drive’ range.

The Touring loses some efficiency to its extra weight, relative to more basic variants, but still enjoys a position as one of the more efficient SUVs of its type, benchmarked (tested in lab conditions) at 7.5L/100km for combined city/country driving.

For city driving only, you might be able to do considerably better. It’s been benchmarked at 6.4L/100km in extra-urban areas, and you’ll also find the iStop feature as standard in all CX-5s.

This can automatically switch off the engine while braking and flip it back on exceptionally quickly when you’re ready to go again. If you’re stuck in traffic or navigating a sea of red lights, this can make a considerable difference.

It’s been described as “annoying, but not annoying enough to turn off”. If you don’t like having a slight delay when you’re ready to take off, it can be easily switched off with a button on the dashboard.

Reviewers across the board found the Touring to be a confident-feeling drive, and said that despite the less impressive acceleration, it still feels much smaller and sportier than it really is.

You might find that the front seats are fairly high, remaining comfortable and roomy on long trips, but that they don’t throw you to the side on curves as much as you’d expect from such a high-riding seat.

Like previous models, the Touring also features a sports mode, which is intended to make for a “sportier” driving experience by increasing accelerator sensitivity and engine speed at the cost of significantly higher fuel consumption. Some reviewers loved it while others couldn’t stand it.

It can change the handling considerably and, depending on what kind of driving you typically do, this might be an essential part of your routine or a never-touched feature. Like iStop, it’s one of those features you’re going to want to try out while test-driving.

You might find the suspension relatively firm compared to other SUVs. Reviewers typically found it to be a happy balance: firm enough to give you good feedback from the road but soft enough to sort out all the usual bumps and imperfections, and generally well aligned with the CX-5’s mission to be a versatile ride inside and outside the city.

Most reviewers agree that the CX-5 interiors are impeccable. The first generation of CX-5s may have won hearts and minds with its engine and handling, and so with little else to improve on, Mazda’s engineers turned their attention to the interiors.

It’s generally found to be comfortable, roomy and clearly designed with the driver in mind, especially in the front seats. The boot space has increased from previous generations, but still remains fairly compact at 442 litres. Fold the rear seats flat, however, and this expands to a luxurious 1,342 litres.

Reviewers also enjoyed having multiple USB chargers and also commented on the usefulness of a 12V outlet in the cargo area.

The in-cabin technology is generally considered to be perfectly adequate for all your needs, but some experts reported difficulties like slow booting up and a failure to recognise phones. You will probably want to have a good play around with the in-cabin electronics if you take a Touring for a test-drive.

A lot of reviewers pointed out that the Touring variant offers a fantastic range of features for only a minor step up price-wise. Specifically, for only $1,600 more than the Maxx Sport you get some of the most widely complimented features, including:

After a medium SUV? We've also compared the Nissan X-Trail and the Hyundai Tucson.

Compare some options to finance a Mazda CX-5