We combined 3 expert Mazda BT-50 reviews to save you time. 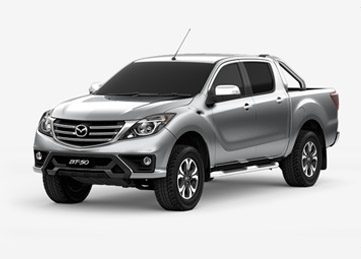 Avg. critics score: 78.00%
3 critics
How did we calculate this? We analysed and aggregated the scores of Cars Guide, CarsApproved and WhichCar to bring you the Finder score. This is a comprehensive score that brings together the 4 different expert ratings you see below.
Finder is personal finance comparison site that provides you with the tools you need to make better decisions. Learn
how we work and how we make money.

How does the Mazda BT-50 compare to other utes?

Mazda also offered optional accessory packs for the BT-50. They were:

No prices were available for these extras.

Depending on the model, the 2017 Mazda BT-50 holds value relatively well.

Mazda BT-50 reviews from around the web

From 2006-2020, the BT-50 was a "twin-under-the-skin" with the Ford Ranger. The 2 utes shared the same chassis, engine and other common mechanical parts. However, outside, the styling is quite different from the Ranger, with the 2 vehicles sharing only a handful of common exterior panels. For some reason, the BT-50 never matched the Ford Ranger on sales. Mazda Australia engineers worked on the BT-50, opting for a tighter suspension and a slower steering set-up. All-in-all, journalists felt the Mazda was not as well made as its Ranger cousin.

However, the BT-50 packaged a gutsy, decently fuel-efficient engine range, with similar off-roading abilities to the Ranger. All that came in a less costly exterior shell, so if you're looking for an alternative to a Ford Ranger from this time period but want similar specs, the BT-50 could be a great option.

Mazda offered 2 engine options for the BT-50. Those were a 2.2-litre, 4-cylinder diesel and a 3.2-litre, 5-cylinder diesel. Though Mazda rebadges these engines as "MZ-CD" motors, they are in fact based on Ford Duratorq diesels. You'll find the same engine in Ford Rangers.

Surely, this duet of power plants will perform the same as they do in the Ranger?

Reviewers say there are some key differences, which unfortunately hold back the BT-50 a smidge.

A few of the journalists mentioned that the engines suffered from observable turbo lag, which is evidenced as a hesitancy in stop-start traffic. It could just be the engine's tune, though peak torque on both the 2.2 and 3.2 appear to kick in at pretty RPMs. The problem seems to be magnified by an automatic transmission that holds on to cogs till the last minute. In the end, some reviewers suggested the Mazda was more agricultural than its blue oval relative.

Away from town, on the highway, motoring experts said the 3.2-litre donk had plenty of power. Mazda labels it as "gutsy". One journalist found that it wasn't difficult to spin up the rear wheels on damp roads, thanks to the engine's power and torque. When this happens, the dashboard will light up like a Christmas tree, showing the electronic stability control system is working to get things settled again.

When fully loaded up, the 3.2 supposedly performs well. During their testing, writers found it always had plenty of muscle to get the BT-50 moving, even going up hills.

The most efficient 2017 BT-50 models in the range claim 8.0 litres/100km. Those numbers are for a single-cab chassis 2.2 diesel with a manual gearbox and RWD.

With more power and capacity, the 3.2 naturally uses more diesel. The precise amount will vary depending on the body/gearbox/drive configuration, but official figures are as high as 10.0L/100km for a GT 4x4 dual-cab auto.

Once you've factored in real-world driving conditions, the fuel usage is almost always higher than those brochure figures. During their time behind the wheel, one reviewer could only achieve 12.8L/100km for an XTR dual-cab, though this was predominantly driving around town.

Unusually, Mazda's website and brochure for the BT-50 (at the time) didn't list emissions. After a little digging, we found that the 2.2-litre puts out 199g/km of CO2 and 3.2-litre models are responsible for as much as 245g/km.

Many reviewers found fault with the BT-50's handling. They discovered the ride was overly firm and stiff, which can be quite jarring on rough roads. This seems peculiar when you consider that it shares a platform with the Ford Ranger.

Clearly, Mazda Australia engineers evidently went down a firmer suspension route, where Ford's team worked on blending the ability to lug loads with keeping as much passenger comfort as they could. Reviewers suggested the BT-50 bounces and jostles around, where the Ranger stays more planted.

The steering system is also different in feel to the Ford Ranger's. On the Ranger, steering response varies depending on speed, so when parking, you get more assistance. The BT-50 doesn't share this variable input assistance and motoring journalists were quick to notice this. Test drivers said it was heavy, requiring a lot of effort to manoeuvre at low speeds.

Pair that with a sizeable turning circle of 12.4m and you'll need to be a calm and confident driver to pick your way through bustling supermarket car parks.

The cabin of the BT-50 is described as simple and unexciting. However, it is practical and hard-wearing – qualities that tradies look for in a ute.

As you move through the range, commercial steel wheels become 17" alloy rims. Reversing cameras become a standard fitment on XTR and upward dual-cabs. XTR utes also receive an 8-inch touch screen with HDMI, USB and AUX inputs. This system features integrated satellite navigation with 3D off-road terrain maps. An additional 2 speakers bring the total count to 6 around the cabin. However, some journalists lamented the lack of a CD player on the upgraded infotainment system compared with the work trucks.

After a medium SUV? We've also compared the Nissan X-Trail and the Hyundai Tucson.

Before the latest 2020 model, the BT-50 served as a budget Ford Ranger, in more rounded outer wrapping. Behind the body panels, there were a few differences, but journalists still appeared to prefer the Ford Ranger. The Ranger is better equipped, rides better and some would say is better looking.

But you can't deny the price difference, as the pre-2020 BT-50 was very competitively priced. In the end, Mazda's 2nd-generation ute is a solid, all-rounder that is underrated.

Compare some options to finance a Mazda BT-50