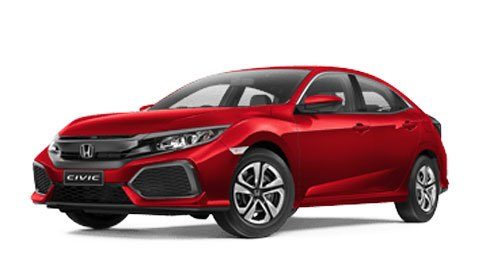 Avg. critics score: 78.60%
5 critics
How did we calculate this? We analysed and aggregated the scores of Cars Guide, WhichCar and Car Showroom, Car Advice and Practical Motoring to bring you the finder.com.au score. This is a comprehensive score that brings together the four different expert ratings you see below.
Finder.com.au is personal finance comparison site that provides you with the tools you need to make better decisions. Learn
how we work and how we make money.

How does the Honda Civic compare with its peers?

Prices start at $24,990 for the VTi Civic hatch. Honda has fit the VTi model with a 1.8-litre petrol engine and an automatic transmission. This base model features steel wheels and halogen projector beams as well as cruise control and phone connectivity.

The top of the range VTi-LX model has a 1.5 litre, turbocharged petrol engine and automatic gearbox. This model possesses LED headlights and fog lights, a leather interior and a premium 12-speaker sound system.

For anyone mulling over buying a hatchback, you should at least consider the Civic. With its dramatic and modern styling, excellent equipment levels even on base models and spacious interior, the Civic is a practical daily driver. The steering and handling is generally praised by reviewers, as are equipment levels, though the lack of active safety assists on lower spec Civics knocked off a few points and the noisy CVT gearbox received little fanfare from journalists.

Generally, the motoring media community favoured the turbocharger-equipped model over the naturally aspirated model. They extolled the engine, describing it as willing, eager and perky. This engine was lauded for delivering plenty of oomph with minimal lag over the rev range.

The larger 1.8 offers 104kW of power at 4,300rpm and 174Nm of torque at the same revs. In simple terms, torque is the rotational force an engine produces. The kW power rating is how quickly an engine can generate the torque. You feel torque in terms of acceleration. Power generally results in higher top end speeds.

Because the 1.5-litre turbo engine produces more power, 127kW at 5,500rpm and more torque, 220Nm across a broad rev range from 1,700rpm to 5,500rpm, it was preferred by journalists. They said the 1.8 was adequate, though some reviewers exclaimed it was asthmatic, while the turbocharged engine delivers a more engaging drive.

Critics unanimously said the CVT transmission was loud and humdrum. The 1.5-litre engine models receive a CVT with more conventional gear shift programming that imitates the fixed ratios of a traditional transmission. This was preferred to the standard CVT paired with the 1.8, which was pronounced as soggy and power sapping.

Fuel economy is a claimed 6.4L/100km for the 1.8 and 6.1L/100km combined for the turbo 1.5. These figures are pretty comparable to rivals like the VW Golf – a petrol Golf hatch with a dual-clutch auto uses 5.4L/100km, or 16% less fuel. The Hyundai i30 burns 7.3L/100km combined, or 14% more petrol. Rivals like the Mazda3, Toyota Corolla and Ford Focus all beat Honda’s hatchback on economy as does the Renault Megane, Peugeot 308 and Audi A3. That said, many of these models are diesel and some of the manufacturers offer hybrids too, where Honda only packages one of two petrol engines into the Civic.

While the Civic is no teetotaller when it comes to consuming fuel, it’s certainly not an excessive drinker either. Remember though, that in real-world testing and driving conditions, you’ll probably struggle to meet the factory’s claimed fuel economy levels. The reason? In fuel economy assessments, technicians strictly control the conditions. Out on real-world public roads, the weather, other drivers, traffic, your driving style and road surface all play into your fuel usage.

Although the Civic hatch weighs 28kg more than its sedan counterpart, journalists heaped adoration on the steering and handling. Review drivers found the Civic holds corners well and has accurate and responsive steering with controllable understeer when hustled. Thankfully, the sharp handling doesn’t come at the cost of comfort; the supple suspension smoothes out road bumps. Even normally firmer riding models with lower profile tyres deliver a pleasant ride.

Some testers felt the steering set-up on base-model Civics didn’t offer the same positive response as higher grades. Generally, reading several reviews, you can see that the Civic is fun to drive and though not perfect, it’s certainly up there with the best in the small car class.

Next up is the first of the turbo cars, the VTi-L Turbo. In addition to a turbocharger and smaller, higher power engine, VTI-L buyers receive gearshift paddles on the steering column, auto sensing headlights, rain sensing front wipers, DAB radio, privacy glass for rear occupants and dual-zone climate control. The alloy wheels jump up one-inch to 17”.

The RS Civic branches off from the VTi-L, bringing a touch of sportiness to the Civic hatch. The 17” rims are upgraded for a more aggressive “sport” design. Door handles are now finished in chrome, with piano black side skirts. Honda also installs a front and rear spoiler and central twin exhaust. Halogen headlights become more efficient LED lamps and the car’s LED headlights are given auto-levelling abilities. A sunroof makes summer day driving more bearable and cloth seats are exchanged for leather trimmed, eight-way power adjustable, heated seats. RS models have aluminium sports pedals and a powerful 452-watt sound system with 12 speakers, one of which is a subwoofer.

The range-topping VTi-LX brings more luxury comforts and driving assists compared to the VTi-L. This model has LED front fog lights, an electric sunroof, LED headlamps with auto levelling and an auto-dimming rear-view mirror. The gear shift is clad in leather as are the seats and the VTi-LX gets the same 12, rather than 8, speaker sound system. Front seats are heated and adjustable electrically in eight directions. Finally, this model gets a suite of Honda Sensing driver aids, including the following:

If you’re after comfort, safety and luxury, the VTi-LX model is the one for you. If you want a balance between value and performance, opt for the VTi-L, the first model in the range with the 1.5 turbo engine. If you have less to spend, the VTi entry model has plenty of equipment and features as standard.

Reviewers summed up the interior as spacious, comfortable and well appointed on all models. With an array of safety assists and solid construction, the entire Civic range was awarded a five-star crash rating by ANCAP.

The Civic is a serious contender for the best hatch trophy. The 1.5-litre engine is punchy and efficient, though some journalists longed for more engine options and a manual gearbox. The noisy CVT auto box was a sticking point for most reviewers. It’s by no means perfect, but overall, it’s a well-rounded and sensible proposition for those looking to purchase a hatchback car.

Compare loans for a 2017 Honda Civic below