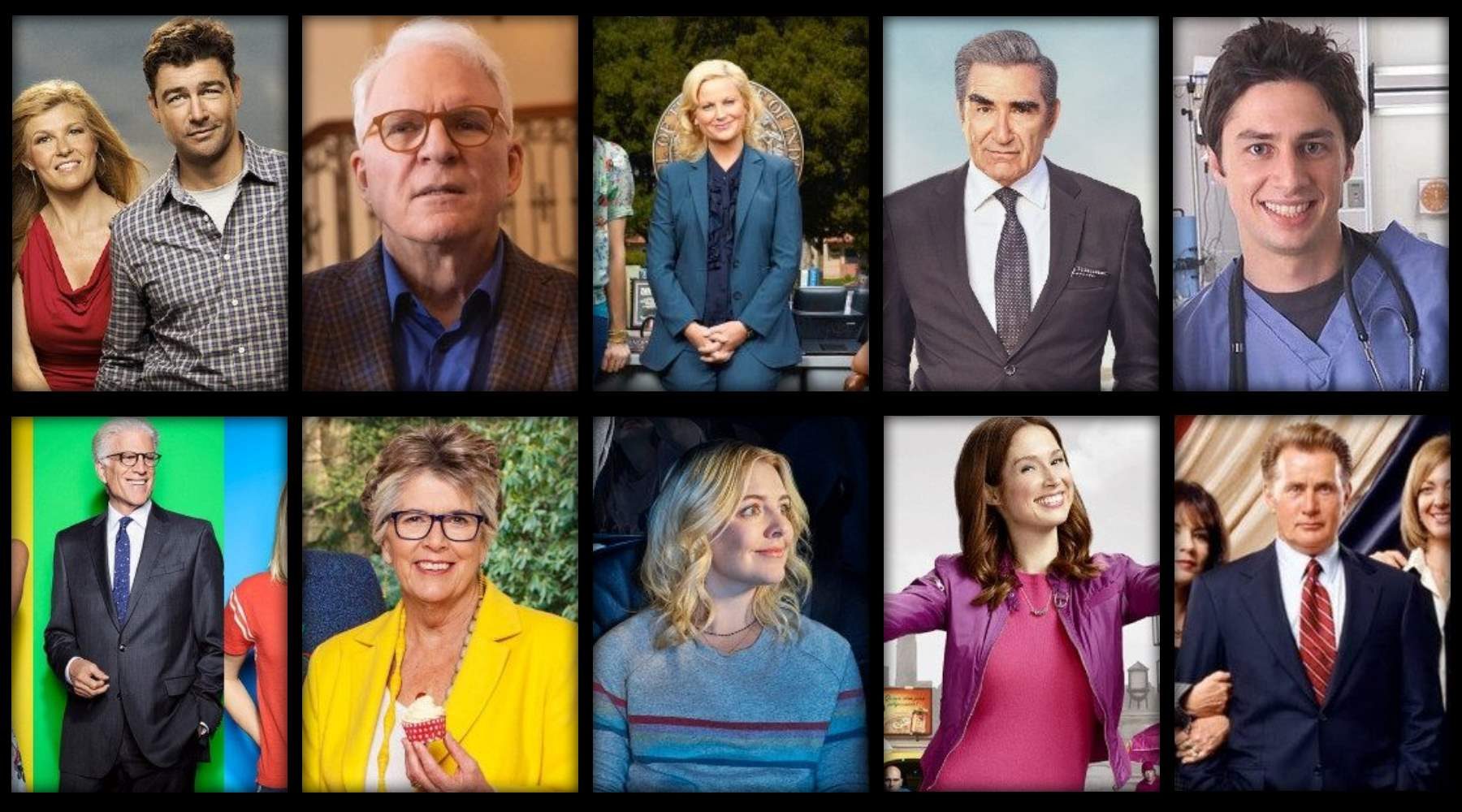 These similarly inspiring series will keep you busy until Ted Lasso returns.

Given the current state of the world, there's no wonder we're desperate for joy. Which is exactly what the Apple TV+ series Ted Lasso specialises in.

The show came out during the year that shall not be named (fine, 2020) and steadily grew in popularity until it became the talk of the Internet. It would have been the main subject debated around the water cooler too, but most of us were working from home. Season 2 was released this year and proved that Ted Lasso's initial success wasn't a fluke. The series has staying power thanks to its uplifting tone, wholesome characters (for the most part) and relentless optimism.

The downside? Once you binge your way through all episodes, you'll be at a loss for what to devour next. Not only that, but you'll want to hold on to that warm and fuzzy feeling the show gave you for as long as possible. Thankfully, there's an obvious solution: Watch something that gives off similar vibes. We're Richmond 'til we die, but we're also starved for entertainment.

Sorry, I need to get myself a pair of scissors to cut to the chase. Pour yourself some garbage water, reach for the open jar of peanut butter on the counter and stream one of these other 10 gems. Whichever you choose makes for a worthy Ted Lasso follow-up.

ED'S NOTE: You can catch a bunch of these shows using streaming free trials, check them out here.

Filmed as a mockumentary, Parks and Recreation revolves around the employees from the Parks Department of Pawnee, a fictional town in Indiana. They're led by the unstoppable Leslie Knope, who is determined to take on any project that would benefit the community.

With a stellar ensemble cast and a winning combo of humour and heart, this show is an absolute delight.

Scrubs was created by Bill Lawrence, who also happens to be a co-creator of Ted Lasso. A blend of comedy and drama, it follows a group of interns as they kick off their careers at a teaching hospital.

Given the setting, there will be a few tears. However, the show generally boasts a hopeful tone. It also packs enough jokes per episode and surreal day-dream sequences to balance out the sadness.

The Other Two centres on 2 struggling and cynical millennial siblings whose lives turn upside down when their teenage brother becomes an Internet sensation. Naturally, they try to take advantage of his fame to make a name for themselves, to various degrees of success.

The showbiz satire is on point. Yet, the best thing about this sharp and genuinely hilarious comedy is that it portrays a family that's flawed but whose members love each other unconditionally. That's very Ted Lasso as far as we're concerned.

Watch The Other Two online

If you're watching Ted Lasso mainly for the sports of it all, Friday Night Lights will be right up your alley. The series is about a coach with a big heart who does his best to guide a high school football team to glory.

At the same time, it showcases many of the social issues plaguing small, close-knit communities and features strong friendships, family unity and romance. To call it earnest would be an understatement.

5. Only Murders in the Building

Only Murders in the Building starts off with a death, which is technically as far from optimistic as possible. Nonetheless, this mystery series offers impeccably cosy vibes, putting the focus on the characters instead of dwelling on any grisly details that might upset a delicate stomach.

The show follows 2 older folks who team up with a young woman to investigate a death in their building which they believe should be classified as a murder. They start a true crime podcast, chase leads and bicker as they try to get to the truth.

We wouldn't go as far as to say that Only Murders in the Building is "more mysterious than David Blaine reading a Sue Grafton novel at Area 51", but it will keep you guessing.

Watch Only Murders in the Building online

6. The Great British Bake Off

"Poor little cake, soggy bottom!" We apologise for the fruity language, but that's what the lads at Mae's pub are chanting while watching this delectable reality series.

The Great British Bake Off features home bakers eager to prove their skills. Surprisingly, the competition is far from cut-throat. The contestants are doing their best, the atmosphere is friendly, the joy is at an all-time high. Pure comfort.

What do politics and football have in common? Let's not go there.

Instead, let's agree that both The West Wing and Ted Lasso are series about decent people struggling to "do the right-est thing" in spite of various obstacles that come their way.

Created by Aaron Sorkin, The West Wing revolves around the presidential staff who work in the White House. In other words, it centres on people striving to change the world for the better. What's more optimistic than that?

Schitt's Creek is a riches to rags story about a wealthy family who lose their fortune. They relocate to a small town they once bought as a joke and have to adjust to a simpler life. As you can imagine, that doesn't come without challenges.

The show has a stellar cast, a big heart and a wonderful sense of humour. The small community is brimming with kooky inhabitants and you'll fall for everyone's eccentricities in no time. Witnessing their various shenanigans is an instant mood booster.

Rescued after 15 years in a cult, Kimmy Schmidt decides not to dwell on her troubles. Instead, she's eager to make up for lost time. Kimmy reclaims her life, moves to New York and approaches every day with enthusiasm.

The premise of The Unbreakable Kimmy Schmidt is undoubtedly dark, but the series is poignant and laugh-out-loud funny. Careful, though: Kimmy's zest for life is infectious.

"Everything is fine." This is the message Eleanor, a selfish young woman, sees as this imaginative sitcom begins. Turns out she's dead, but her altruistic deeds landed her in the Good Place.

The problem? She's pretty sure that someone made a mistake, because her life on earth was anything but righteous. With a little help from new friends, she works toward becoming a better, more ethical person to avoid getting kicked out.

Saying more about The Good Place would take us into spoiler territory, so we'll just mention that the series tackles complex subjects like ethics and philosophy in a creative way. The series is also perfectly cast, clever, hilarious and thought-provoking. Like Ted Lasso, it will leave you with a big smile on your face.